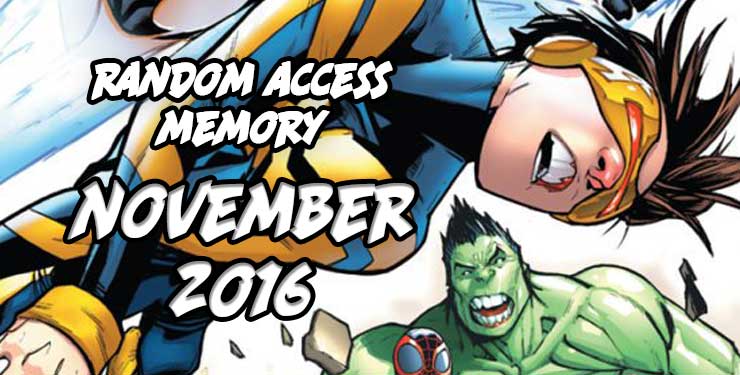 Rand Bellavia takes a look at his growing longbox, and reflects on comics released in November 2016.

Batman 11: I Am Suicide part three This is a pretty serious story (it is called “I am Suicide” after all) which is probably why these panels stuck out so clearly to me. I’m a sucker for this kind of silliness.

The Champions 2: Change the World The first issue consisted of the team coming together and issuing their vision statement — to the comic reading audience as well as the greater 616 world.  This issue is all about team-building: Apparently Mark Waid finds Amadeus Cho to be more annoying that his creator (and regular writer) Greg Pak does. This gag is totally worth the page it takes to sell it: Kamala gives another speech, and there is a discussion re: whether there is such a thing as too many Captain Americas. Obviously the point of this is to allow the readers to get to know the characters, but the conversation never crosses into “let’s talk about something we all already know in a way that people never would” exposition. The kiss is interrupted by Kamala, who is approaching wet blanket territory.  Hulk returns and — because this is a Marvel Comic — is attacked by Cyclops for the obligatory second issue fight scene with a popular guest hero.  Once the obvious misunderstanding is cleared up (see: this is a Marvel Comic) Cyclops joins our intrepid band of young heroes.

As the tired heroes prepare for sleep, they notice that Viv is missing.  They go off in search of her and learn that Viv doesn’t so much mind the stench of testosterone and body spray. If you haven’t figured it out already, Mark Russell’s Flintstones comic is satire.  This issue is called “Election Day,” so watch out.

We open at a debate, and learn that one of the candidates is a war-monger. Fred and Barney quickly leave the debate.  We flash back to learn why Clod the Destroyer’s speech left a bad taste in their mouths. We see how Fred and Barney came to fight in the war with the Tree People. Having just had his first child, Fred feels that he can’t take any chances. In the present, there is another election taking place at Pebbles and Bamm-Bamm’s school. Pebbles is incensed at her classmates reaction to the speeches. Back in the past, the Tree People have been defeated, and Fred makes a chilling discovery. This comic consistently did three things: Other Comics I Read from November 2016

Rand Bellavia is half of the Filk Pop Nerd Rock band Ookla the Mok. They’ve been playing at science fiction and comic book conventions since 1994. Their clever, media-savvy lyrics, catchy melodies, and accessible power-pop sound have made them a cult-sensation with nerds everywhere. With song titles like Super Powers, Welcome to the Con, Arthur Curry, Kang the Conqueror, and Stop Talking About Comic Books or I’ll Kill You, it’s easy to see why. Rand and Ookla the Mok have won four Pegasus Awards, and the 2014 Logan Award for Outstanding Original Comedy Song. Ookla the Mok had the most requested song on Dr. Demento in 2012 (“Tantric Yoda”) and 2013 (“Mwahaha”). Rand co-wrote the theme song for the Disney cartoon Fillmore, and his vocals are the first thing you hear on Gym Class Heroes’ Top Five hit “Cupid’s Chokehold.” In his secret identity, Rand is the Director of the Montante Library at D’Youville University in Buffalo, New York. He has lectured and presented at international conferences on the subject of comics and libraries. Rand is like the Internet, except he smells nice.