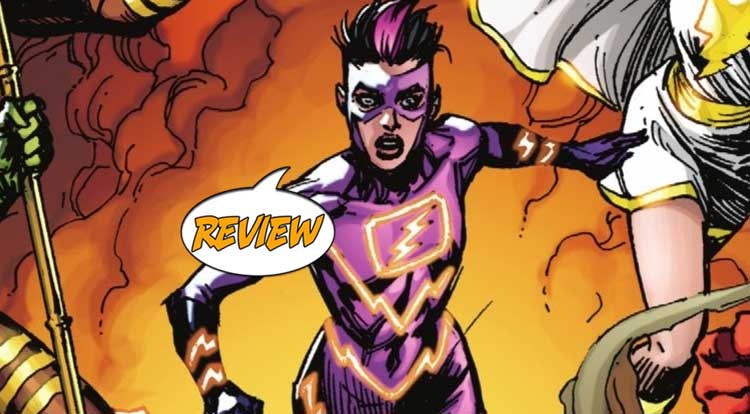 Previously in Justice League Incarnate:  Following a devastating defeat at the hands of the one true Darkseid, the Superman of Earth-23 leads a team of superheroes from myriad worlds that includes Flashpoint Batman, China’s Flash from Earth-0, Captain Carrot from Earth-26, and the brand new superhero Dr. Multiverse from Earth-8 in a last ditch effort to stop the end of every possible universe as we know it!

WELCOME TO THE HOUSE OF HEROES

On Earth-8, the remarkably familiar heroes of the Retaliators are enjoying a few rare moments of quiet when, out of nowhere, the new hero Doctor Multiverse appears with the remains of their missing member, Machinehead.  They initially treat her with mistrust, as she was thrown out of their team in a story we haven’t seen, but before she can find out the truth about Machinehead’s death (he betrayed the Justice Incarnate team to Darkseid during Infinite Frontier) the mad Titan Tartarus attacks!

Elsewhere, Superman and Batman have come to the conclusion that they’ve lost another Flash (Red Racer died during Multiversity, while Earth-0 Flash Barry Allen is still missing after being booted out of the multiverse at the end of Infinite Frontier), and seek out Barry’s hand-picked replacement, newest Flash Avery Ho!  While trying to track Barry, Superman, Batman, Flash, and Captain Carrot end up on Earth-8, just in time to see Tartarus take on Darkseid…

This month’s Joe-Bob totals include most of the heroes of Earth-8, joining Earth-7 in the annals of “Characters Who Look Like Marvel Guys, So We Killed ‘Em,” with Darkseid tearing apart the faux-Hulk Behemoth and snapping the neck of would-be Thanos Tartarus.  With half the Incarnates lost in the Multiverse and the other half defending the House of Heroes against Darkseid, Williamson and Culver have made a pretty big splash with their first issue and I’m quite impressed with the story so far.  While I’m always sad to see characters dying brutally before ever getting to do anything fun, we do at least get Deadshot (the ersatz Hawkeye) indicating that he worships Xeen Arrow, and a fun moment where Tartarus explains that his armor combines all the power rings of the emotional spectrum into some sort of gauntlet of infinity.

The art is a bit distracting in this issue, though.  Not bad, by any means, but the multiple art teams make for some odd moments of transition, especially between Bressan’s chunkier, more stylized pencils and Peterson’s.

In short, this issue has a few moments that gave me pause, but not so many that I didn’t enjoy the big Multiversal extravaganza, and while I understand why Justice League Incarnate #1 killed of Earth-8, it still makes me sad; at least I can console myself with new members Flash and Doctor Multiverse, who has a lot of interesting potential, and a fun, if inconsistent, art job, earning 3.5 out of 5 stars overall.  It’s a story that can’t even be brought down by the presence of the utterly unnecessary Flashpoint Batman Thomas Wayne, and that’s a particularly difficult bar to clear.

A Xeen Arrow reference, a shot at Marvel and a brand-new hero make for an exciting opening for a book that I enjoy. I have no idea where or when it takes place, but it's nice.