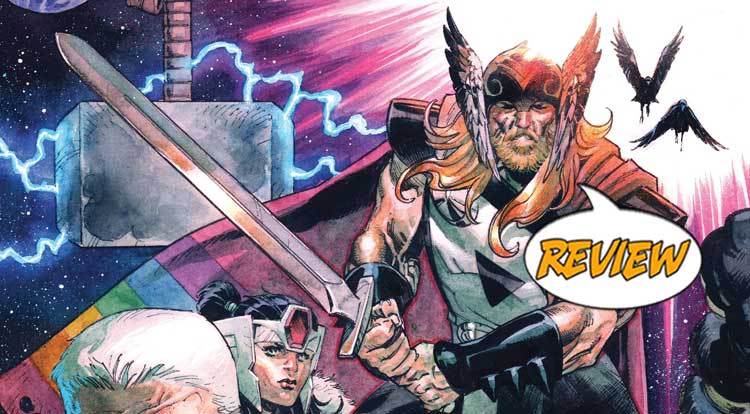 Where’s Mjolnir?  Only Throg, the Frog of Thunder knows!  Your Major Spoilers review of Thor #19 from Marvel Comics awaits!

Previously in Thor:  Mjolnir has gone missing! And nobody, not even the powerful eyes of Lady Sif, is able to locate it.  So Thor must turn to the last person he wants help from… Odin.

Until the hammer is found, nobody in the realms is safe!

SOMEONE HAS STOLEN MY HAMMER

The first six pages of Thor #19 are a capsulized version of the entire history of Mjolnir, from the days when mighty Titans battled in the void, to the destruction of a moon that created the Uru metal, to the forging of the hammer by the dwarves of Nidavellar.  We transition directly to an enraged Thor interrogating Sif (who has taken Heimdall’s place on the Rainbow Bridge and also his ability to see throughout the heavens) about the theft, only to have her tell him she can see nothing.  Thor prepares to stalk away, but she tries to stop him, to get him to talk, only to have him pull the King card and threaten to take away her sword.  Thor then seeks out his father, who is hiding out in some sort of intergalactic fight club (of which the Marvel Universe apparently has dozens?) and convinces Odin to assist him.  But when they find their way back to Nidavellir, hoping that the dwarves can help to find their work, they find only blood.  All the dwarves are dead, and the killer clearly used a familiar weapon: Mjolnir itself.

STILL WITH THE KING IN BLACK?

The beginning of this story irked me a little bit, as apparently Knull is now considered as important and powerful and entity as the Phoenix itself, but as we transition into the history of Mjolnir, the narrative really catches me.  Seeing Thor so out of sorts, angrily confronting his closest friends and family is off-putting, but the fact that someone was able to block Sif’s senses and kill the entire dwarf population is… kind of terrifying?  The biggest problem, of course, is the prophecy stating that a God of Hammers is going to kill the King of Asgard.  Cates’ script creates a number of interlocking problems that continue to exacerbate one another, and the art is up to the task of conveying the ideas within.  The piece de resistance is absolutely a moment is about to be killed by an alien, only to have Thor arrive and effortlessly catch its blade without the slightest effort on his part.

Put it all together, and Thor #19 is a really good first chapter of story, with strong art and a truly interesting mystery at its heart, making for a return to Thor for me and 4 out of 5 stars overall.  There are few things as satisfying as a book where the visuals work well enough to convey a character’s intentions with a silent panel, and this one pulls it off three separate times.  Here’s hoping the rest of the arc is this good.

The theft of Mjolnir sets Thor on a path that leads to nothing but more death, and it makes me want to read the rest of this story. Well done!