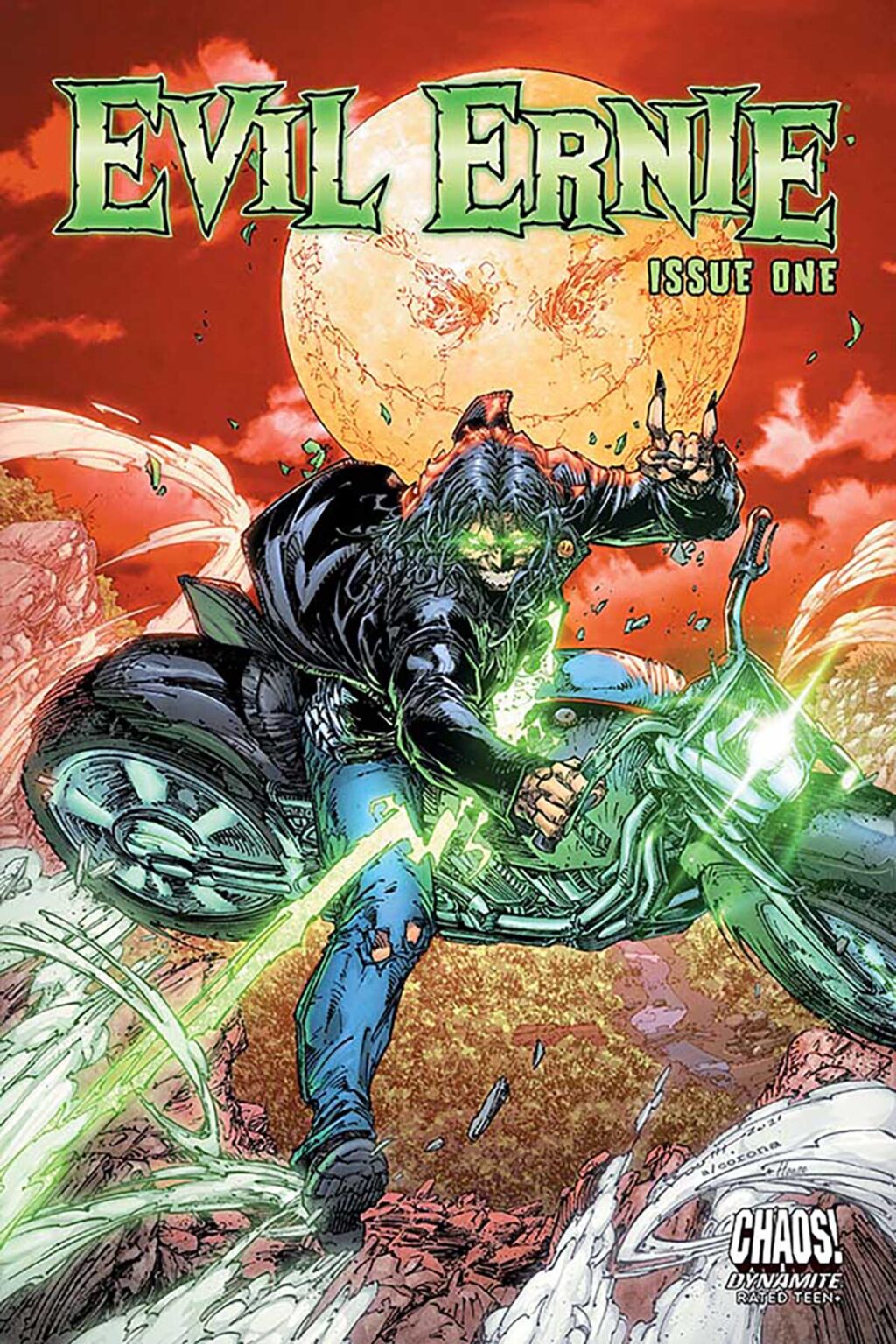 Evil Ernie (Vol. 3) #1
writer: Scott Lobdell
artist: Ariel Medel
covers: Brett Booth (A), Arthur Suydam (B), Blank Authentix (C), Brett Booth (D-RI/BW), Arthur Suydam (E-RI/BW), Brett Booth (F-RI/Virgin)
FC | 32 pages | Horror | $3.99 | Teen+
Dynamite Entertainment proudly presents an all-new Evil Ernie #1, written by Scott Lobdell and illustrated by Ariel Medel! Featuring two amazing covers: The King of the Undead — Arthur Suydam and amazing superhero artist Brett (Titans) Booth!
After EARNEST GLECKMAN is mortally wounded, he discovers he must “pay down his new lease on life” by serving as a part time fixer for a death cult. Each time he manifests his dark side as EVIL ERNIE it becomes harder to maintain his tenuous grip on his inherently good humanity
EARNEST GLECKMAN is a good kid with exceptional grades in his senior year at college…his only quirk is the rock band he sings in every Saturday night. He enjoys the rock esthetic and “dressing the role” if not acting like a nihilistic punk.
All that is changed when he assumes the role of…
EVIL ERNIE who is the polar opposite of EARNEST. ERNIE is vicious and cruel and sadistic as he employs all manner of torture or murder (or oft-times both!) against his targets.
EARNEST is stable, good, focused. ERNIE is a chaotic, evil, anarchist.
Evil Ernie first appeared in December 1991! Celebrate 30 years of CHAOS!
Scott Lobdell rose to the top of the 1990s on Marvel’s X-Men related titles, specifically Uncanny X-Men, the main title itself, and the spin-off series that he conceived with artist Chris Bachalo, Generation X. He also had writing stints on Marvel’s Fantastic Four, Alpha Flight, and The Adventures of Cyclops and Phoenix miniseries with artist Gene Ha. One of the premiere comic book writers of the nineties, Lobdell won 2 consecutive Wizard Awards for his ongoing work on Marvel Comics’ Uncanny X-Men. He is also a prolific creator of other self-published titles such as “Ball & Chain”, “Hellhole”, and “The Stray”. In 2017, he wrote the smash horror film Happy Death Day