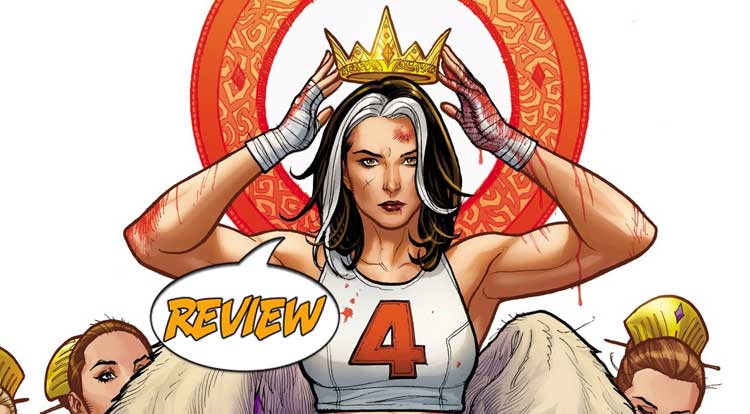 Secrets are revealed and the galactic empire will never be the same!  Your Major Spoilers review of Fight Girls #5 from AWA Studios awaits!

Previously in Fight Girls:  Ten hard-as-nails women face off in an ancient contest of champions where the winner truly takes all: the title of “Queen of the Galaxy.”  To win the challenge each contestant must survive the hazards of the planet’s harsh landscape, the ferocious predators on and below its surface, and their fellow contestants.  This edition of the contest has a twist: one of the contestants is an infiltrator who has her eye on something bigger than the prize.

Who is she and what does she really want?

THE FIGHT IS OVER… WHAT NOW?

Readers of the previous issue of Fight Girls will recall that the entire issue was Xandra Blackwater and Torn Winter fighting in their underwear in loving detail.  Now, 72 hours later, the Gilmoran Empire awaits the arrival of their new Queen Tora.  The security detail does not, however, keep a close eye on Xandra, who breaks free, slicing open her arm to remove the tracking device implanted there, and escapes into the night.  At the same time, Tora is taken to meet her new husband, a procedure that requires stirrups, a minor surgical procedure, and a helping of sexual assault.  Of course, she has a few tricks up her sleeve as well, murdering not only the King, but her two attendants/surgeons and making a run for it herself, making her way to a waiting escape ship where her partner is waiting to get away…

There’s a chance that that first bit may make you think this comic could be an exciting tale, but I want to make one thing 100% percent clear: Do not read this comic.  Aside from the sloppy plotting of the entire series, putting aside logic in favor of cheesecake, and the ending (which isn’t quite a deus ex machina, but isn’t in any way consistent with, or foreshadowed, in the previous four), it’s just gross.  King Rufus is drawn as a hideous purple sausage, a parody of a fat person who makes Baron Harkonnen from Dune look sensitive, and Cho takes as much joy in showing us his mottled purple flesh as he does the legs and boobs of the female protagonists.  The fact that the story doesn’t follow through on sedating Tora and cutting open her genitals so that Rufus can rape her doesn’t make it any less repulsive, nor does her murdering him immediately after.  The final page reveals that everything that we know is wrong in the cheapest, most hacky way possible, ending with a moment equivalent to Superman winking at the reader, without the charm or the justification.

Every review is a different beast, and every reviewer will occasionally come across something ghastly enough to warrant a warning like this.  For me, Fight Girls #5 is that book, with art that combines grotesquery with cheesecake ineffectively, coloring that is garish even in moments where it should be muted (like, say, a hospital suite) and a story that actively insults my intelligence and just does not work, earning 1 out of 5 stars.  It’s very rare that a comic book comes along that offends me as a reader, as a comic book fan, as a fat person, and as a feminist, but this book is that repellent total package.  Those who buy this book will likely regret it.

What is clearly meant to be written as a clever twist ending with a touch of "Yes, Queen!" turns into a violent visual morass of just plain disgusting.

Truly not worth your time.