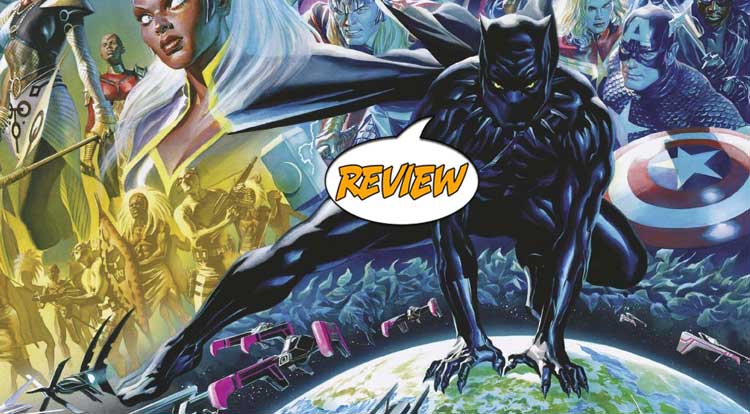 A desperate call for help throws the Black Panther into a hidden world of deceit and death.  Your Major Spoilers review of Black Panther #1 from Marvel Comics awaits!

Previously in Black Panther: Fresh from returning from his travels in space, Black Panther receives an unexpected and urgent message from a Wakandan secret agent!  Now T’Challa must race the clock not only to save his agent, but also to keep his true agenda under wraps.  Because if the truth comes out, it could cost T’Challa everything…

Black Panther #1 opens with The Avengers in action against one of their periodic “hordes of weird aliens” threats.  The Black Panther, Doctor Strange, Thor, and Captain America are working alone (!!), but quickly manage to overcome the threat, with Strange teleporting the bad guys away.  After the battle, Captain America takes a few moments to consult with T’Challa about his commitment to The Avengers,  Black Panther agrees to dedicate more of his attention to the team (which is weird, ’cause I’ve been reading Avengers and he’s always in it), then returns to the new Wakandan Parliament to sit in and weigh in with his opinions.  The Prime Minister bristles when he attempts to give directives, as a King would, but T’Challa snarks at her that her silly little democracy can’t get anything done.  It’s… odd, to say the least.  Elsewhere in the world, two secret undercover agents meet for a clandestine dinner and date, only to get targeted by a sniper, who kills one of them.  The other calls Black Panther, who abandons everything to go undercover with her in the field…

SLEEPER AGENTS AROUND THE WORLD

I was super-leery about John Ridley taking over the reins of Black Panther, remembering when Reggie Hudlin took over the title and suddenly retconned in a life-long love affair with Storm.  Ridley’s first issue doesn’t throw that much of a curveball, but the reveal that Wakanda has insurgents placed in governments around the world is kind of a shock.  Fortunately, there are at least two places in past runs of Black Panther where he became super-paranoid and untrusting of the Westerners, even The Avengers, so that I can sort of deal with.  I’m less happy with the decision to take off and leave The Avengers, Wakand, and the throne and go on a Jason Bourne undercover mission, but that’s clearly the hook for this first arc.

Cabal’s art is interesting in these pages, inhabiting a space somewhere between Adam Hughes and Paul Ryan, which makes for some interesting layouts.  The character’s expressions are quite expressive throughout the issue, and I like that you can clearly see the irritation in T’Challa’s face when he is dressed down by the Prime Minister.  The opening page shows a “zoom-out” effect from the texture of Black Panther’s battle gear to the Avengers in full battle, and it’s very impressive.

BOTTOM LINE: ONE OF MY LEAST-FAVORITE TROPES

In short, Black Panther #1 is quite successful in providing a bridge from the Coates era to the new world of John Ridley, but suddenly takes a turn into “Hero Goes Rogue”, one of my least favorite story tropes, an especially egregious example given that he’s not only a King but the Chairperson of The Avengers, with strong art sending T’Challa off in a whole new direction, earning 3.5 out of 5 stars overall.  The end of the issue promises conflict with Storm, with Captain America, and even Black Panther’s own Dora Milaje warriors, which is both worrisome and exciting.  I just hope that the execution is excellent, as all of this feels like an odd storyline choice for the modern Black Panther.

Ridley and Cabal successfully pull off a "you don't know the WHOLE story" moment successfully, but transition into a "hero leaves his responsibilities behind to clean up a mess he didn't know he made" isn't as successful.