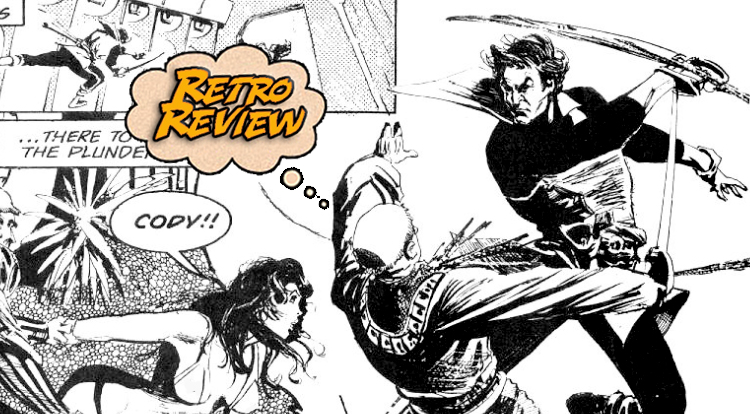 The black-and-white comics boom of the 1980s still gets a lot of attention, but what about the one from the early SEVENTIES?  Your Major Spoilers (Retro) Review of Star*Reach #1 awaits! Previously in Star*Reach:  Michael Moorcock has his Eternal Champion but Howard Chaykin plays a similar game.  His favorite protagonist is a scoundrel and a rogue, traveling the world with a graytone morality, a way with the ladies and a Cuban heel boot.  Call him The Scorpion or Reuben Flagg, Dominic Fortune or Monark Starstalker, they all trace their lineage back to one man…  Cody Starbuck. The setup here is interesting, reminding me more than a little of Jim Starlin’s Dreadstar (which, given Starlin’s presence as a creator on other stories in this issue, makes me think they shared a lot of perspective), positing a post-empire world where interstellar travel is once again a rare commodity.  As for our brigand himself, our first image of Cody Starbuck shows him striking a killing blow on an enemy with his cutlass.  The battle rages on as Starbuck fights his way to his objective, a woman named Evangeline, stolen away for ransom.  When he returns her to her fiance, however, he finds an old colleague waiting for him. Before he can strike Trachmann down, thought, Cody is halted in his tracks by Lord Gideon, who needs the fuel that Trachmann is selling for his aging star-fleet.  This page is an example of the kind of striking imagery that Chaykin uses in this story, breaking the traditional panel format in ways that feel years ahead of their time, presaging the kind of art we’d see in the post-TMNT boom of the 1980s.  Cody returns home to his base of operations, the hive of scum and villainy called New Aragon. There he finds friends, some naked android women (all lovingly rendered and in no way appropriate for an all-ages site like ours), a little bit of intrigue… and BETRAYAL!  Trachmann has had Lord Gideon killed and sent an assassin after Cody, but the pirate is a little bit faster and fights a LOT dirtier.  Killing his would-be-killer, Cody makes his way across the city, watching his hideouts burn and his friends die, crashing into Trachmann’s lair and drawing his blade once more! It’s a truly remarkable battle, especially given how few pages it actually covers, as in the space of twelve panels or so, we get an exciting back-and-forth sword battle, ending when Cody gains the upper hand. Trachmann runs for his matter transmitter to make a fast getaway, but once again, Cap’n Starbuck’s reflexes are faster, shooting the control panel, damaging the device as his enemy enters the portal, resulting in… …the proverbial big ol’ boom.  With the city burning, Cody and Evangeline return to his ship, the Limerick Rake, unsure of what to do next.  It’s a great cliffhanger in a story that doesn’t shy away from sex, violence and a little religion, the same things that might make it difficult to read in a modern context.  The rest of Star*Reach #1 features stellar art by Walt Simonson and Jim Starlin, with elements that remind me of later stories featuring Thanos, Mongul and Walt’s work on Thor, and while the quality of those works varies, the whole book is visually stunning, earning 3.5 out of 5 stars overall.  Many online sources seem to be confused about the chronology of this book, for some reason, referencing the 1978 reprint edition, rather than this original printing which predates Howie’s creation of The Scorpion for Atlas Comics and Dominic Fortune at Marvel shortly thereafter.  But make no mistake: Cody was the first of the Chaykin Guys in fencing outfits who fight with their own peculiar code or honor.

The fact that they all sort of resemble a young Howard may or may not be coincidental.

Like many similar Chaykin stories, this one has blood, guts, sex and religion on uncomfortable display, and it serves as a strong first chapter.