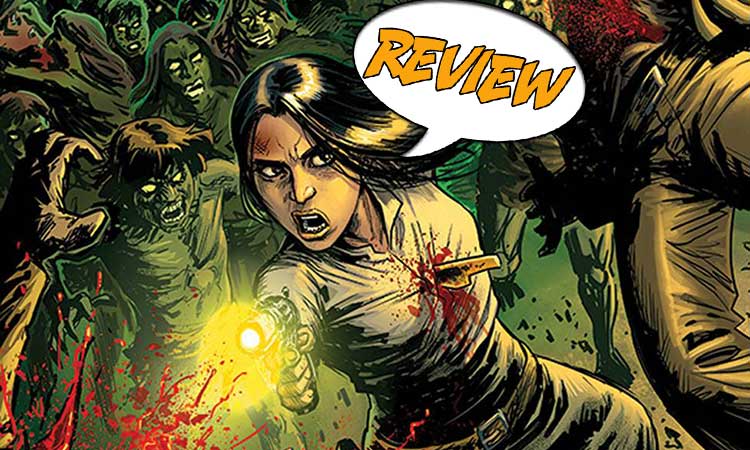 Mercy was stabbed through the heart, but lives! Will Tocto help her get her revenge on the outlaws, and at what cost? Find out in St. Mercy #4 from Image Comics!

Previously in St. Mercy: Frank and Ray, along with their gang, head to the church to find the Incan gold. When they cannot find it, they threaten Mercy and Neto. Neto gives away its location and Frank shoots him. The Sheriff arrives and shoots one of the men. Mercy throws herself on Frank and impales herself on a sacrificial knife. In the past, we see more of Toctollissica’s story. Tocto felt she was the perfect offering, even though she knew it was a lie because she had not yet started her monthly cycles. The determined Ispaca sacrifices her. Supay manifests, sees the truth, and calls down his wrath on her people!

THE CROSSROADS OF CHOICE

St. Mercy #4 opens at the temple in Peru five hundred years ago as it is attacked by manifestations of the children who were previous sacrifices. This is the moment of the curse which has followed Mercy and her ancestors up into the 1800’s. In parallel to this, Arroyo Pass who has just lost its Sheriff. Frank and Ray call a town meeting to announce this, tell of their murders of Mercy and Neto.

In the past, Cuxi leads Tocto away from the carnage. Cuxi was a warrior before she became a priestess, and she fights to protect the girl. Supay reaches them, along with one of his little girls. Tocto professes her love for him and begs him to spare the villagers, who she says lied out of fear. She swears she will become fertile in time, and she will be his forever. He agrees.

In town, the doctor goes into the room where Alex lies, dead, and finds Mercy. She has been stabbed through the heart, but she is still alive. The doctor says he cannot do anything to help her, but that is not why she is here. She knows that as long as the blade is in her heart, she remains alive. She wants to get back at him for telling Frank where they lived, and thus where the gold was.

Frank’s plan is to have the blacksmith melt down all the gold. Mercy arrives. Cuxi’s weapon is among the treasure, and she uses it to kill the outlaws there. She goes in and asks the smith to cut the gold hilt off the blade in her chest and to make a couple items for her.

Ray sees a young girl out on the street. We recognize her as the young girl at Supay’s side in earlier scenes. She is not alone. Supay’s children have arrived. Ray grabs the girl, and someone shoots his hand off. The story lines converge!

Tocto does mature. She wears the gold headdress, which is now cursed and painful, and Supay appears. He is ready to take her now and make her his queen. She challenges him, accusing him of doubting her and rejecting her. Then she kills herself to deny him the power of her sacrifice. He swears his curse will last until he gets what he wants, and this may be made manifest in Mercy.

Ray is stunned to find that Mercy, who he thought was dead, is the one who shot his hand off. The children vanish. Frank appears on the scene, and finds his gold is gone from the blacksmith. They find tracks leading to the cemetery. There Mercy comes out of the dark and beheads Ray. She is Cuxi’s descendant, and she is here for vengeance and destiny.

TERROR IN THE DARK

The art of St. Mercy #4 is dark and powerful. Between Supay’s wrath and Mercy’s revenge on the outlaws, there is a lot of blood and terror. There is an interesting use of color where green signifies events where Supay is present or at least an influence. This helps us keep track of time and place as well as signifying where there are connections between past and present.

Mercy has transformed over the issues. When we met her, she seemed like a young woman living in a time where she had to take on a lot of responsibility at a young age. Last issue, she took a knife to the heart, and we started to see the steeliness of her resolve. She may be unable to die, but that isn’t enough to take on the outlaws. She must think ahead of them and rely on the skills she has learned in life.  She is terrifying in this resolve.

I like the way St. Mercy #4 takes on the tropes of the Western and adds the interesting counterpoint of defying an Incan god. It is a violent story and a little complicated to follow at times. It may not be the happiest of stories, but it is a satisfying tale of revenge.

Mercy may have been stabbed, but that won’t stop her from protecting the Incan gold!