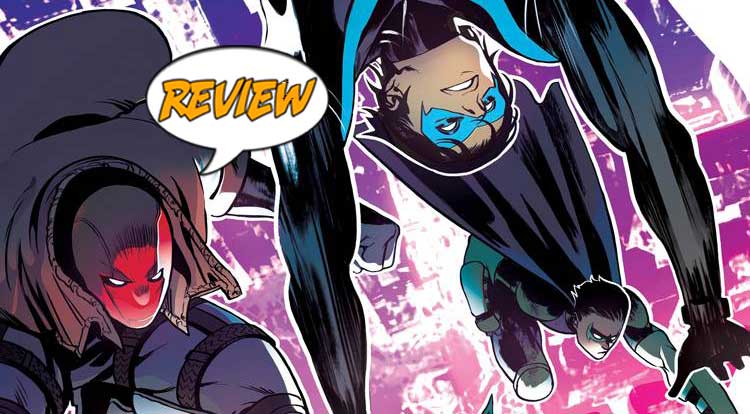 Five former Robins unite, only to be surprised by… the SIXTH?  Your Major Spoilers review of Robins #1 from DC Comics awaits!

Previously in Robins: The five heroes to have donned the Robin cape and mask find themselves at a crossroads in their lives.  Dick Grayson, Jason Todd, Tim Drake, Stephanie Brown, and Damian Wayne come together to discuss the big thing that binds them together: Was being Robin, and Batman’s sidekick, the best choice they could’ve made?  But before they can get to the heart of the matter, they’re ambushed by an unknown assailant with a bone to pick with them.  She claims to have been the first Robin, and she’s out to prove Batman should’ve never trained any of them.

In a place and time unrevealed, a strange young woman catches a baby Robin falling from its nest.  She replaces the tiny, featherless beastie with a grenade, blowing up a crowd of innocents.  Elsewhere, in the city of Bludhaven (there’s an umlaut in there someplace), a group calling itself the Devotees of Anarchy prepares to blow up the sewer system, only to meet resistance in the form of Nightwing… and The Red Hood… and Red Robin… and Spoiler… and Damian “Robin” Wayne.  The League of Former Robins Plus One Obnoxious Current One has actually assembled not to fight crime, but to talk over their role(s) as second banana to the Batman.  Each of them goes over their tenure, discussing their time as Robin, only to be interrupted by a man bearing a message: Several inmates have escaped from Blackgate, each with a tie to the first case of each Robin, but before he can spill the rest of the beans, he’s shot in the head by a woman.  A woman wearing the colors of Robin.

STILL BUGGED BY THE TOURNAMENT

This series was the winner of DC’s recent (and ill-advised, in my eyes) Round Robin Tournament to decide which comic series would get a green light, and it was clear from the beginning that this book was going to be the winner.  After all, it’s got all the Bat-Partners, and people love seeing Bruce Wayne’s various kids in action.  Sadly, this issue doesn’t really deliver, as there’s no real sense of place or time to be had here.  The explosion at the beginning seems to take place in the UK, as someone cries out to call 9-9-9 for assistance, but we cut immediately to Bludhaven without any indication of passage of time, only to have the maybe-Robin cross the Atlantic to appear there.  The discussion between the Robins is literally a series of Wikipedia entries, with each Robin clearly stating their metaphorical name, rank, and serial number before offering some awkward analysis of their time as Robin.  The art is likewise a little bit scattered, with a Nightwing who seems to be twice the size of Damian Wayne, a wild-eyed Jason Todd ,and a Stephanie Brown whose chin could cut glass.  The final splash page is impressive, granted, and parts of the battle in the sewer really hit strong notes for me, but the quiet discussion at Grayson’s apartment is full of awkward sharp noses, bulging eyes and hard-to-differentiate young dark-haired men.

BOTTOM LINE: A BIT OF A MESS

The Round Robin Tournament felt like fait accompli with this book in the mix, but somehow Robins #1 manages to miss the mark both visually and in terms of story, with a mishmash of a little bit of action, a LOT of talky-talky psychobabble and a ludicrous premise (even if we loosen the timelines from the New 52 expectations, Batman having a Robin before Dick seems suspect) that just sort of comes to pieces, earning  2 out of 5 stars overall.  I’m not even sure that die-hard Robin fans will want this one, as none of the ex-Robins feels quite like themselves here.  Even Damian’s arrogance doesn’t quite come through successfully, and that’s disappointing.

Five superheroes who have no intention of not being superheroes decide to talk about whether or not they should have been superheroes, and an ending written as a big surprise that was part of the solicitation copy. Not their best work.