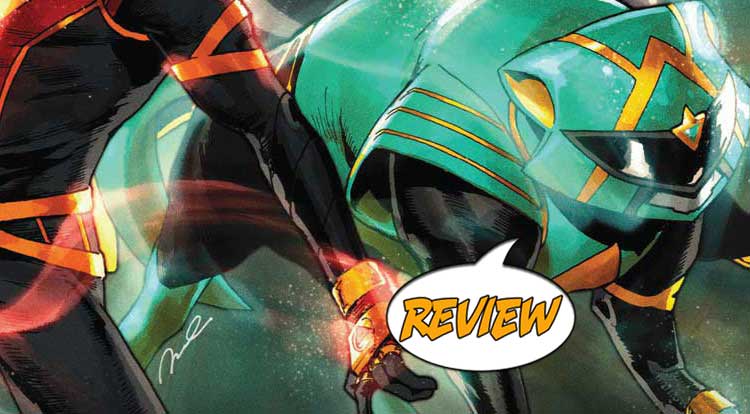 There’s a new Blue Ranger in town, and you’re about to meet them right meow.  Your Major Spoilers review of Power Rangers #13 from BOOM! Studios awaits!

Previously in Power Rangers: The Omega Rangers, including their unexpected savior the NEW Blue Omega Ranger, race against time to beat the impending Empyreal threat to Earth.  But can they deliver the critical secret they’ve uncovered to Zordon before it’s too late?

A LAST-DITCH CALL FOR HELP

Moments after being saved by their newest member, an alien cat named Yale, the Omega Rangers make their way back to Safehaven, where they receive even worse news: a distress call from Tommy, back in Angel Grove.  With Zordon seemingly dissipated and the Eltarians attacking, things are looking grim for the Rangers.  Jason, Trini, Zack, and Yale teleport back to Earth to backup the Mighty Morphin’ Rangers, but the arrival of the Empyreals on Earth makes even that additional power seem meaningless.  Promethea station is the first to fall, then Rita’s palace on the moon.  Jason, Rocky, Yale, Kim, and Adam are able to dig their way out of the wreckage and teleport to the Power Chamber, the last place they saw Billy’s signal, only to get waylaid by Zedd’s goon squad.  The final Empyreal arrives to blow up the Command Center, but it’s not at all clear who, if anyone gets out, as Zordon’s former colleague announces that Earth is now part of the Eltarian empire.

There is little good news to be had in this issue, but overall it’s a more enjoyable issue than Mighty Morphin’ #13, the issue that immediately preceded it.  For one thing, the Rangers actually get in a few shots, even with the power of the Empyreals, and for another, there’s a kitty-cat Ranger now!  The fact that half the team (the Green and White Rangers, Zack, Trini, and Aisha) is unaccounted for may actually be a good thing, and I appreciate the developments around Goldar and company.  The art here is also a little bit clearer than what we got in the previous issue of the crossover, especially a quiet hero moment for Alpha-5, of all creatures.  (“Nobody comes into my house and breaks my drones”, indeed.)

When you break it all down, Power Rangers #13 delivers what readers have been wanting for a while, all eleven active Rangers in action, and even though they get pretty soundly thrashed, there’s still Zordon’s rules of escalation to consider, and at least four issues worth of plot left to cross over, with strong art earning a better-than-average 3.5 out of 5 stars overall.  If nothing else, we’ve got a cool new Green Ranger and a cool new Omega Blue to learn about, so The Eltarian War still has a lot of potential, and you should check it out.

Both Ranger teams are united, just in time to get decimated by the cosmic powers of the Empyreals. There's a next issue solicited, but... who's left to star in it?