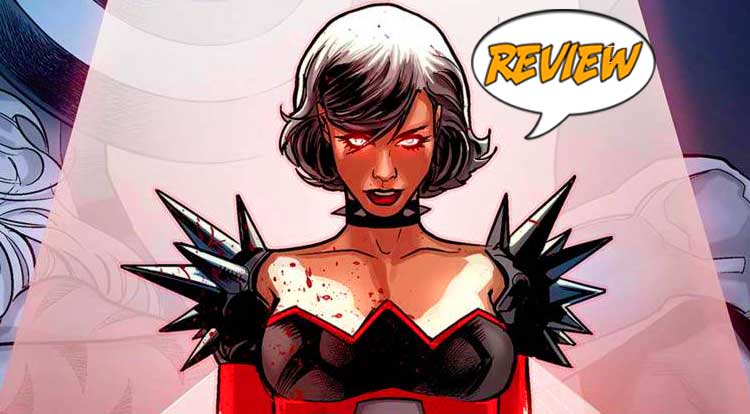 Driven mad by The Darkhold, Janet Van Dyne will have to regain her senses to save the world.  But… does she WANT to?  Your Major Spoilers review of The Darkhold: Wasp #1 from Marvel Comics awaits!

Previously in The Darkhold: Wasp:  Bidden to draw forth five archetypal heroes, the Scarlet Witch chose Janet Van Dyne as “the artist,” the hero whose ingenuity and strength of will could prove the lynchpin in the coming battle against Chthon.  To enter Chthon’s dimension and face his darkness head-on, the Wasp read from the ill-fated Darkhold text… and it drove her insane.  Now her entire life is subject to question.  Janet is no stranger to mental illness; she spent years trying to redeem ex-husband Hank Pym despite his violent breakdowns.

But now, she has the power to reclaim her story… and fight back.

The Darkhold: Wasp #1 with Janet Van Dyne wondering about the nature of wasps, reminding readers that the males don’t even have stingers.  It’s an important point to make, as we jump into her life post-Avengers #181, where Wasp and Yellowjacket were unceremoniously thrown off the team during restructuring by the U.S. government.  It’s the point where Hank’s mental state deteriorated (something we see in these pages, with some VERY uncomfortable moments of emotional abuse), even upon his return to the Avengers fold.  Hank gets back on the team, but in order to prove his worth, he creates a giant robot that he will use to attack the team and give him a high-profile win.  The sequence plays out much as it did in 1981; Janet interrupts his building, only for Hank to insist it’s his only chance.  When she tries to talk him out of it, he strikes her…

Only, in this reality, Janet lands on a cart full of glassware, which shatters and surrounds her with hunks of broken glass, one of which is the perfect size to be a makeshift knife.

Jordie Bellaire, best known as a colorist (and a really good one, BTW) makes her writing debut with this issue, and honestly, her script is the best part of the comic.  The story’s use of relatively subtle dialogue (Tigra and KANG, of all people, ask Janet if she’s really okay with living in the shadow of Yellowjacket forever) is well-done, and the build-up to what we all know is coming is very well-done.  The problem is, the issue feels like it’s ALL build-up.  That’s as much a problem of the format (the choice to use the Age of Apocalypse-style series of one-shots has really damaged my enthusiasm for the Darkhold series) as it is anything in the story.  At the beginning of the issue, I wasn’t sure about Roe’s art, which feels retro and stiff, but as the story goes on, I realize it must have been a conscious choice.  By the time The Wasp picks up her “dagger” to kill Hank, everything has loosened up, from her hairstyle to her body language, and the effect is actually pretty impressive.

While I sort of hate to see The Wasp once again entirely defined by one moment in a long career, The Darkhold: Wasp #1 does what it sets out to do, reminding us of Janet’s darkest hour and making it clear how the evil book has corrupted her, with art and story that work, but a really abrupt ending, earning 3.5 out of 5 stars overall.  If I had my way, all these one-shots would have been intertwined as part of a limited series, building together to show us all five moments of corruption at the same time.  Regardless of that editorial decision, though, this issue makes for an impressive debut for Bellaire as a writer.

It's a well-written story with an odd, stilted art style (that actually works in context) and a really sudden ending. It's among the best of the series so far, though.