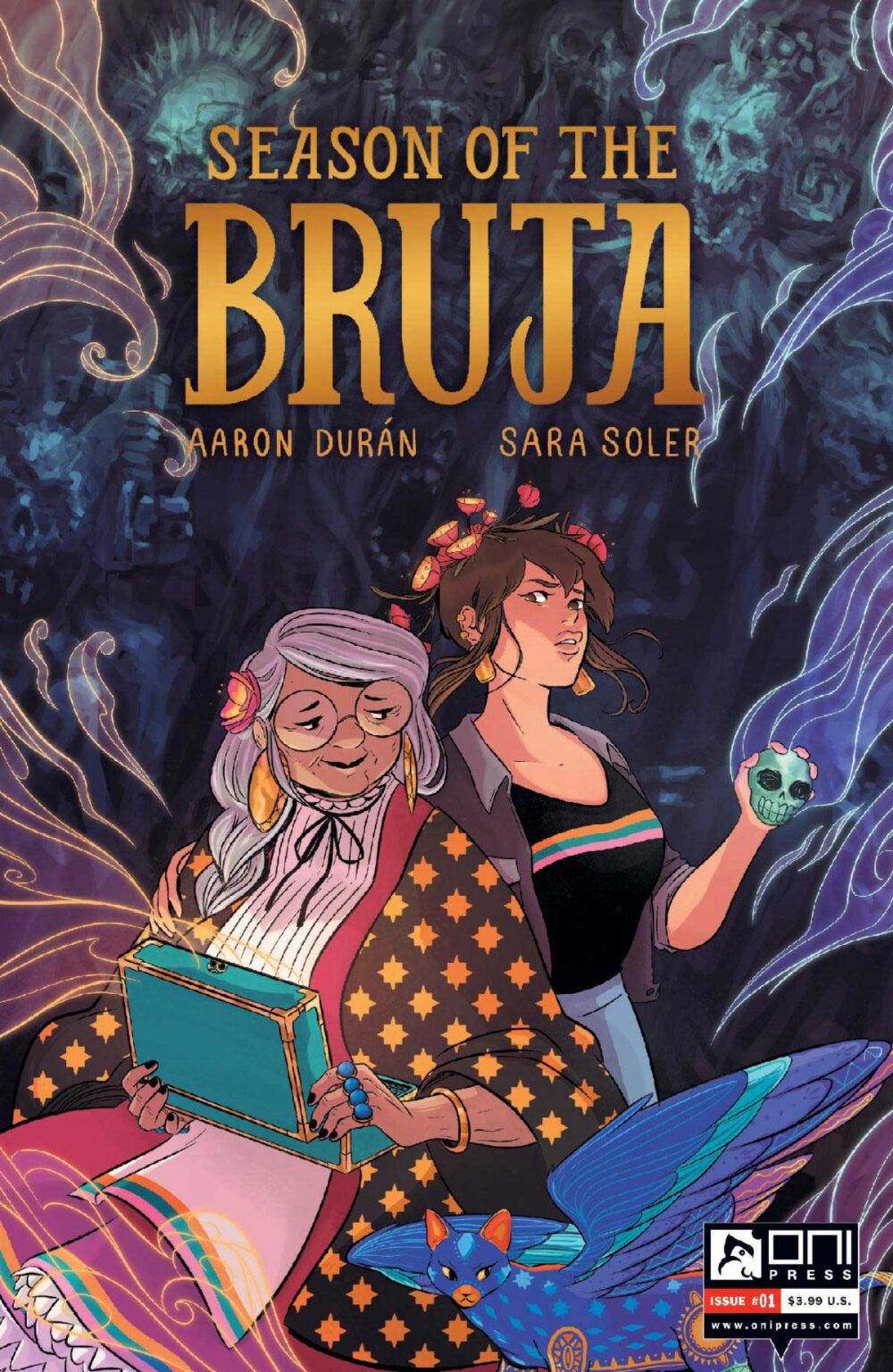 Oni Press is pleased to announce the forthcoming Latinx single-issue series, Season of the Bruja, written by Aaron Durán, illustrated and colored by up-and-coming artist Sara Soler (Us), and with lettering by AndWorld Design’s Jaime Martinez, coming Spring 2022. “Season of the Bruja is an exploration of forgotten culture and heritage I’ve been trying to tell for years,” said Aaron Durán. “Working with Sara has been a dream; her art and energy elevated our comic to levels I would never have imagined, and Shawna [Gore, Oni Press senior editor] does what all great editors do: she found the strongest story within the pages and helped Sara and I bring it to life.” Season of the Bruja is Durán’s debut project in which he adapted much of the lore for the series from his own family’s traditions.

Althalia Cabrera might seem like any other witchy Portland hipster whiling away her days behind the counter of a freaky occult museum, but there’s more to her whole deal than a trendy pursuit of the craft. Althalia is a bruja by blood—the youngest in a long line of powerful magic users from a long-ago culture indigenous to Mexico. In her twenty years, Althalia has studied with her loving abuela by her side, supporting and mentoring her use of the family magic, and protecting her from the darkest parts of their practice’s history. But just as Althalia’s inner light and power begin to shine, the darkness of the past finds its way into her world and strikes a tragic blow, testing Althalia in ways she might not be prepared to survive.

Sara Soler said, “Season of the Bruja is a story that vindicates culture and diversity, the fighting for one’s own rights and also of learning, forgiveness, and the love that you can find in the family, whether of blood or not. Aaron is an exceptional storyteller, not only because of how he tells the story, but because of the values with which the script has been infused. And […] I couldn’t have asked for a better editor! [Shawna] has fought tooth and nail to carry out this project throughout some of the most difficult years I can remember (Hi there, 2020!) […]. Aaron and Shawna have made Season of the Bruja the kind of project I’ve always wanted to be involved in!”

According to Durán, “Season of the Bruja is an ongoing journey of discovering our roots, and I think everyone will see a bit of themselves in the series.”

Inspired by Aaron Durán’s lifelong love for his Mexican family’s cultural traditions and his devoted fandom of horror stories, comics, and Buffy the Vampire Slayer, Season of the Bruja is a five-part series and will be available where comics are sold March 16, 2022.

Aaron Durán has lived in Portland, Oregon, for over twenty years, but spent his childhood in the desolate high desert of Northern California. He’s worn many hats over the years, going from film production to radio host, and writing has always been his love. In addition to his young adult novels, Aaron has written stories for Dark Horse Comics, Image Comics, and Activision. When he’s not at his keyboard, he’s in the kitchen experimenting with traditional Mexican ingredients to rediscover lost dishes.

Sara Soler is a comic book artist and illustrator born in Spain currently living in Barcelona, where she moved to study at Escola Joso. There, she started working in comic books and the publishing world with short stories for several fanzines, but also as a costume and stage designer, and for animation studios as a storyboard and background artist for the Memories of a Man in Pajamas adaptation of Paco Roca’s graphic novel. Her professional career began in 2017 with Red & Blue (Panini comics), and since then, with publishers such as Dark Horse Comics, Planeta Comics or RBA, on titles such as Dr. Horrible: Friends Forever, Plants vs. Zombies, Primavera Graphic Sound, and Planeta Manga Vol. 2. She keeps the hard work fueled by dark coffee and with the help of her assistant, Cimmeria the cat.