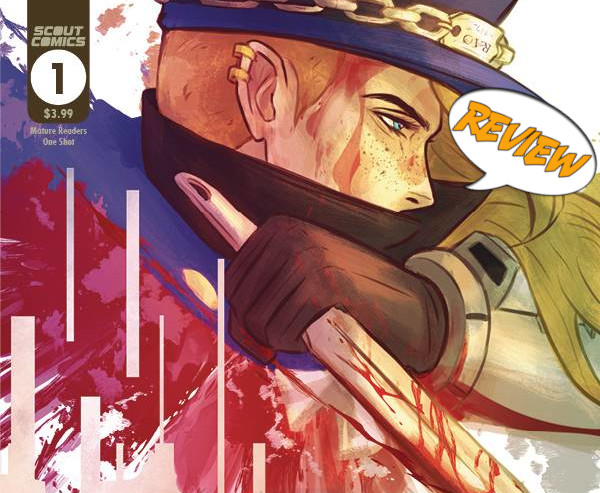 War always seems to be on our doorstep. But is victory worth the price of death? Find out in Commander Rao One-Shot by Scout Comics! Previously in Commander Rao: After a successful Kickstarter, Commander Rao has released to the comic book stands! Enter this dystopian future and find out how Commander Rao was able to stop the tyrannical Baron Klaus!

Commander Rao One-Shot begins with a newspaper article about the heroism of Commander Rao. She was a resistance fighter who fought against the greatest villain of the century. However, she left the resistance to find her own path and ended up killing Baron Klaus by herself. The comic then shows us that mission. She fights through an army of soldiers, tanks, and guns by herself with just a couple of wrist daggers and a rifle. When she takes a bullet shot, she remembers a time where she was nearly killed but ultimately saved by her friend Julie. Surviving with injuries, she was sent home from the war.

Despite taking the gun wound, Rao finds the baron and begins to question him about what he did with the resistance members whom he killed. Where were the bodies? When he doesn’t remember, Commander Rao throws him off the balcony to his death. After her victory, she sits and contemplates the friend she lost while the rest of the world celebrates Baron Klaus’ death.

I am impressed with how complex Commander Rao is. This is a story of violence and revenge. What is the consequence of all this killing? In a way, we are stuck with Commander Rao trying to figure the answer to that question in the end. To communicate this theme, we are presented with dynamic action with little dialogue. This consistent fighting speeds up the pacing of the book and doesn’t give us a chance to contemplate what is going on until Rao kills Baron Klaus. We just know that Rao is perceived as the good guy and Klaus is bad and we must trust this to be true. This makes us root for Rao who has perpetuated all this violence. Then suddenly, we learn that this violence was emotion-fueled. She didn’t even do it to be a hero or to save lives. She did it for revenge. And I wonder if I would have rooted for her if I knew that. In a way, I’m betrayed even though she did the right thing.

I am impressed with what Fell Hound was able to do in such a single issue. She captured my attention quickly and kept me thinking. When I did my multiple read-through of the comic, I found new things to look at and think about. And on top of that, I got a complete story that I am satisfied with. Great work here.

As an aside, there is a cool short comic tale in the back. While I didn’t include it in my review, it is even more content for your money.

I want to see more of Fell Hound’s work because Commander Rao One-Shot was spectacular. When I read a comic, I want engaging characters with complex motivations and a driving plot. I got just that. While I haven’t read a perfect comic book, I am happy to give this a 5 out of 5 and a high recommendation for people to read.

Commander Rao One-Shot is an engaging comic book with complex themes. Commander Rao is a flawed character that does the impossible.