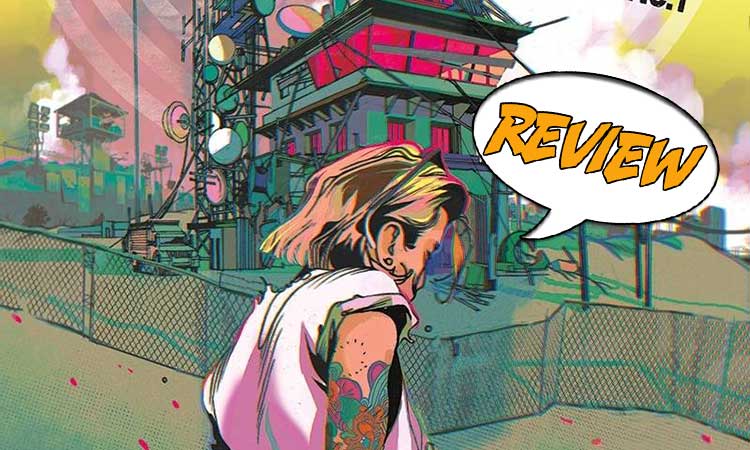 In a town in the middle of desolation, a radio station stands, letting people know that humanity isn’t quite gone.  Your Major Spoilers review of Radio Apocalypse #1, awaits!

Previously in Radio Apocalypse: Long after the rock out of space struck the world and turned it all to dust, in Bakerstown stands the last radio station on the planet.

Radio Apocalypse, opens with a DJ from the titular radio station calling out a salutation to the residents of Bakerstown.  Out in the surrounding wasteland a pair named Tan and Cali are struggling to make it to the town.  Cali has hurt their leg and is having a hard time walking, the duo are worried about nightfall.  Back in Bakerstown a pair of thieves break into the radio station trying to steal scrap.  When they alert the owner, one of the thieves leaving the other, Rion, behind.  Back in the desert, Cali convinces Tan to leave them behind and make it to town, then send someone back for them.  In town, the owner of the station confronts Rion and offers them a choice, either get kicked out of town and left to the wilds or agree to work for him, Rion agrees to work for him.  Tan arrives in town and tries to convince the leader of the town to send someone for Cali.  He explains that his job is to keep the people in town alive and he can’t risk a rescue attempt. A broadcast from the radio station calling for Tan draws her to there.  The DJs say they have Cali on the phone.  The two have a brief conversation before the dangers of the night arrive.

The post-apocalyptic story about the last remaining bastion of humanity is not new.  In fact, it’s as close to a dime a dozen as you can get.  Yet, somehow Radio Apocalypse #1 manages to set up a story and tone that feels unique in the genre.  Rather than brutality and pure cut-throat survivalism being the main motivator amongst the people, there seems to be a strong sense of optimism and unity, almost to a fault.  The leader of Bakerstown lays it out best; He’s bad at his job, because people keep trying to be kind. That being said, while the tone set up here is strong, the actual story is a bit light.  By the end of this issue, the story feels more like a cold open to something bigger rather than a story that stands up on its own.  This might very well be the intent but without the benefit of the rest of the series, this issue isn’t very strong on its own, in terms of storytelling at least.

The art in Radio Apocalypse #1, is not going to be for everyone.  It’s slapdash use of lines and swaths of colors makes it come off as chaotic and kinetic,  while still managing to mostly depict the events of the book clearly, like a punk rock impressionism.  I say mostly, because there are a few times when the details get lost in the style, but for the most part it’s a fun book to look at.

BOTTOM LINE:  TUNE IN TO THIS ONE

Radio Apocalypse #1 might not be the strongest comic in terms of plot, but it certainly makes up for those shortcomings by managing to find a unique tone within the post-apocalyptic genre.  The tone, matched with a engaging art style, makes this a comic book that’s worth checking out.  Not to mention, one of the best DJ monologues since SuperSoul from Vanishing Point. 4 out of 5 Stars

Radio Apocalypse #1 is a relatively calm and thoughtful book hidden under a frenetic and intense packaging. This is one to check out if you’re looking for a different feel to your post-apocalyptic story.