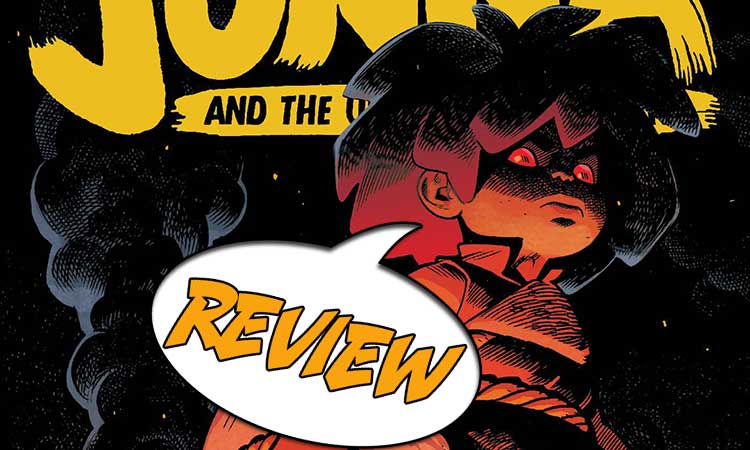 Jonna and the Unpossible Monsters #8 Review

Another monster encounter drops Jonna and Rainbow underground again. What mysteries will they find deep in this cave? Find out in Jonna and the Unpossible Monsters #8 from Oni Press!

JONNA AND THE UNPOSSIBLE MONSTERS #8

Previously in Jonna and the Unpossible Monsters: Rainbow finds Jonna only to be separated from her as Jonna is taken to fight monsters in the pits. Rainbow braves the terrifying pits to find her sister and save her. Instead, Jonna saves her as a monster breaks free. Continuing the search for their father, they find a drained riverbed. The girls remember fishing with their dad where he teaches them about taking only what they need, and that family sticks together. This was the day Jonna met up with a monster and disappeared – and the day Rainbow ran home to find their father missing and the river drained of water.

FROM THE WASTELANDS TO THE UNDERGROUND

Jonna and the Unpossible Monsters #8 opens with Rainbow and Jonna making their way through a wasteland, not realizing that a giant snail-like monster is stalking them. They soon notice it as it breaks the ground beneath them, and the girls fall into some subterranean muck. Jonna tries to jump out, but the muck is tenaciously sticky and holds her back. The giant snail oozes past them.

They find a dry cave above the level of the sticky stuff where they can finally doze off for a while. As they sleep, Rainbow dreams. In her dream, Jonna runs off and Rainbow chases her. But when she catches up to Jonna, the little girl is huge and terrifying, like one of the monsters. Suddenly they are in a town that Jonna stomps through like a kaiju. Then Rainbow sees their dad and runs to him, where she can be safe…

She awakens for real this time. Jonna is still asleep by her side. She shakes her awake, and they see a light deep in the cave. Jonna runs toward it, and Rainbow follows. There, deep underground, they find some strange, glowing flowers, except that inside the huge buds, there are baby monsters!

Jonna and the Unpossible Monsters #8 continues to be a book of relatively few words, so much of the storytelling is conveyed through the art. One of the things it does a great job of is depicting the monsters and their sheer enormity. The opening sequence is a perfect example of this. When we first see the snail, it’s from an angle where we cannot tell its size, and we assume it is small. As we see it moving, and from different angles, each additional frame tells us, “Nope, it’s bigger than that…” until finally we see it looming over the girls.

The goop in the cave is drawn for humor, but I think it is also used for the contrast with the dream sequence. Rainbow’s dream starts out innocently enough – the colors are the same blue tones as the cave has been so far. We’ve seen Jonna run off before, so that is nothing new. But a couple pages in, there is a dramatic color shift into reds, especially Jonna’s eyes. She looks scarier than she has ever looked before, and it is drawn in a way that is rather frightening and certainly could be to younger readers. It may just be a dream – but it makes us wonder even more about Jonna.

Jonna and the Unpossible Monsters #8 is a great chapter in a wonderful all-ages book. The two sisters couldn’t be more different, yet as each new twist happens, they pull together to work their way through it.

Jonna and the Unpossible Monsters #8

On their own again, Jonna and Rainbow continue the search for their father.