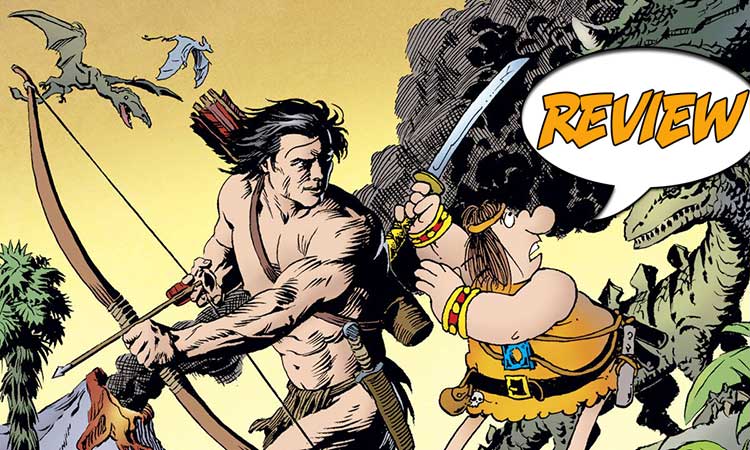 Will Groo find a fray? Will Tarzan save the day? Will Mark and Sergio learn a lesson about doing crazy crossovers? Find out in Groo Meets Tarzan #4 from Dark Horse Comics!

Previously in Groo Meets Tarzan: Mark finally leaves Comic-Con International to look for Sergio. Sergio, who is lost at the Jungle Safari Park, finds more adventure than he was expecting including snakes, vultures, alligators, and losing all his clothes. Meanwhile, Groo actually meets Tarzan, who is fighting slavers. Tarzan handles them, but Groo offers to slay them. They get into a discussion about this, but the point is that there are too many slavers and Tarzan says they would need an army to help them. Groo immediately heads off to get one. Sergio inadvertently terrifies tourists. Mark doesn’t find him and heads back to Comic-Con. Tarzan starts freeing people from the slavers. And despite himself, Groo finds his way back to the village of Ungara.

TYING UP ALL THE LOOSE ENDS

As Groo Meets Tarzan #4 opens, Groo has returned to the village of Ungara from the path no one has ever returned from. Groo, being hungry (but being, you know, Groo) feasts on a kettle of lice killer as Rufferto rounds up several villagers. Groo, being, well, you get it, assumes he should slay them, but Rufferto, the brains of the team, manages to convince him not to long enough that he remembers he was here to raise an army. Between the choice of certain death and uncertain death, the people of Ungara decide to accompany him.

Tarzan, who is able to remember what he’s doing, captures the leader of the slavers, dresses in his clothes, and starts leading the slavers from the village they were headed for. As his plan works, Tarzan hopes he doesn’t run into that strange barbarian again.

Sergio learns that the alligators in the pond are fake. The real alligators died, but the park hired some guys to play alligators for the tourists. Sergio is getting pretty chilly, but the employee tram won’t be along for an hour. Joel (playing Alligator #1) offers Sergio the other alligator costume.

Groo leads his army into Tarzan’s world and starts calling out for him. This gets the slavers wondering, and soon they discover Tarzan, and a fight begins in earnest. Before they can shoot Tarzan, Groo arrives with much confusion all around while everyone thinks everyone else looks strange. Despite the slavers having guns, Groo and Tarzan win the day.

Mark returns to Comic-Con and mentions out loud that Sergio is missing. An attendee overhears, and soon word gets around. Everyone is desperate to find Sergio because who else could possibly draw Spy Vs. Spy? They pry Mark out of his latest panel and a motley collection of vehicles heads back to Chula Vista Jungle Safari Land. Finally, there are enough people to find Sergio.

I think it must be a challenge to write an extended Groo story like this, mainly because we already know how it must end. Groo always stumbles and bumbles his way to success without realizing it. But the creators find an elegant way to get everyone back where they belong with a bit of a twist at the end.

A CONTRAST BLENDED WITH AFFECTION

I cannot imagine what it must of have been like to draw the climactic fight scene in Groo Meets Tarzan #4. The two art styles are so different from one another. It isn’t just that the Groo characters are so cartoony while the Tarzan ones are super based in reality. There are also big differences in shadowing and in the ways everyone reacts to each other. And somehow it all works out and looks great, goofy in spots, but great. Even in such a serious fight, there is room to toss in a couple Groo gags too that somehow fit.

I love the whole comedy bit of everyone from Comic-Con racing out to rescue Sergio. This is great as a frame because it echoes what we saw of the Con in Issue #1. Never mind that it is simply delightful to see a bunch of people in cosplay crammed into vehicles and heading out to the park. It also sets up the terrific joke when Sergio crawls out of his alligator costume and sees the Grim Reaper standing in front of him – a cosplayer, of course. This is a section to spend a little time on, just enjoying it.

I think Groo Meets Tarzan #4 manages to come back around to everything that was set up along the way in the previous issues. As I said, we knew from the beginning how this was probably going to end. In a Groo book, the fun is enjoying the trip as the plot meanders about, redirecting us like a magician as, with its other hand, it pulls out a fake alligator or two.

It’s the action-packed finale as Groo and Tarzan save the day!