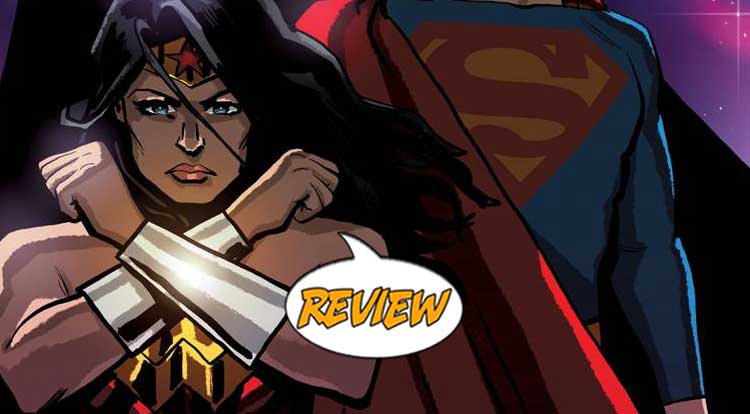 The power of a Green Lantern, controlled by the will of Darkseid.  Cancel Christmas.  Your Major Spoilers review of Justice League: Last Ride #7 from DC Comics awaits!

Previously in Justice League: Last Ride: Past and present and future all collide!  Everything connects back to J’onn’s death, Batman’s final decision, and Superman’s regret, all leading to this final confrontation with Darkseid.  Who lives (some do!)?  Who dies (some do!)?  It all culminates in a bombastic finale from which the Justice League will emerge eternally changed.

“DON’T YOU PEOPLE EVER DIE?”

Now that Darkseid has the full might of the Oan power battery, he seems to have everything under control and the League at his mercy.  That’s when J’onn J’onzz emerges from the firepits of Apokolips, embodied with emerald energy and ready to get his payback.  Batman has to save Superman from a Kryptonite foe, nearly losing his own life, while Wonder Woman handles the team’s Lobo problem decapitationally.  Darkseid’s armies rally, but the sudden return of Hal Jordan (and an entire Green Lantern-created Justice League) turns the tide.  While GL J’onn saves Batman, it’s up to Superman and Wonder Woman to face the Lord of Apokolips, who is ready to boom-tube nuclear weapons to Earth and destroy the entire planet, only for an enraged Hal to take the offensive.

As Justice League: Last Ride #7 ends, we get a time skip showing the formation of New Oa, a planet built in the ruins of Apokolips, and official representation in the United Planets, while the League decides that it’s time to go universal.  This issue’s battle sequence feels remarkably short, honestly, but Zdarsky establishes the stakes effectively and follows through, though seeing Darkseid murdered by a Leaguer bothers me.  With Martian Manhunter as a new Guardian, John Stewart and Hal Jordan are ready to rebuild the Corps, and I’d be very surprised if we don’t get the Justice League Universal title sooner, rather than later.  The art is more than satisfactory, but there are a few moments that feel visually underdeveloped for me, especially the setup of of the GL Justice League, only to have them out of focus after the first couple of panels.  Mendonca’s character facial expressions are also a little bit muddy from panel-to-panel, which sometimes makes it hard to understand character motivations.

All in all, Justice League: Last Ride #7 is a pretty okay comic book, showing us a Justice League on a whole new playing field, with art that works more often than not and a story that doesn’t feel at all like a traditional Justice League tale, in ways both good and bad, earning 3 out of 5 stars overall.  There’s really no such thing as an Elseworlds anymore, but as long as I take this as a story in that alternate universe vein, it’s an entertaining read.

One of the League commits cold-blooded murder, but overall it's a pretty impressive end to a story, taking the big swings and pulling it off more often than not.