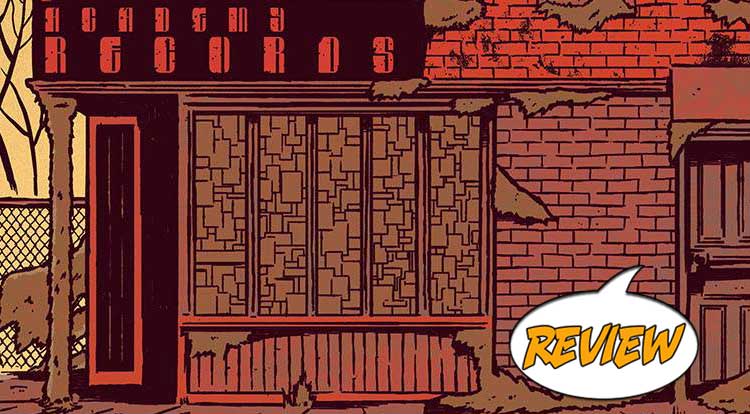 Looking for things to do in Denver, after the apocalypse?  Your Major Spoilers review of What’s The Furthest Place From Here? #1 from Image Comics awaits!

WHAT’S THE FURTHEST PLACE FROM HERE? #1

Previously in What’s The Furthest Place From Here:  The world has ended.  All that remains are gangs of children living among the ruins.  But Sid believes there must be something more out there.  When she disappears into the wastelands, her gang will risk everything to bring her home and defend the things that matter most: Your survival, your loved ones, and your record collection.

WHO YOU’RE GONNA BE AFTER YOU LEAVE HERE

The first thing we see in What’s The Furthest Place From Here? #1 is a bloody tooth, fallen from the mouth of Prufrock.  He seemingly lives in a record shop with eight or nine other kids, worrying about what happens when they “get old.”  He is interrupted by Sid, who is heavily pregnant but clearly doesn’t understand what that means, who has an announcement: She has found “her album!”  Pruf laughs her off at her choice of a Hall & Oates album, showing her SS Decontrol’s 1982 record, “The Kids Will Have Their Say,” but their discussion is interrupted by the arrival of a knock at the door, and suddenly everything spins out of control.  The face at the door turns out to be Slug, a missing member of their number, and his arrival is followed by a gang of armed hooligans wearing masks, and a pair of ethereal, ghostly looking creatures they call The Strangers.  Marky takes a projectile to the head, but Sid is able to break up the attack with something Slug gives her right before he dies.  She doesn’t know what it is, exactly, but it makes a big bang and is easily identifiable to readers as a gun.  That night, the group has a wake for their fallen friend, awakening to find one of their number has gone missing.

TRIPLE-SIZED FOR JUST ONE EXTRA BUCK

What’s The Furthest Place From Here #1 is billed as a coming-of-age tale, but that doesn’t really feel like what we get in this issue.  The mysteries abound (What is The City?  Who are The Strangers?  Where did Slug’s body go?  Why don’t they know what pregnancy is when they know who Elvis Costello is?  How and why do they choose an album to represent their identity?) and many of them are compelling.  The narrative is a little bit scattered with a narrative that calls to mind Bret Easton Ellis’ work (people are afraid to merge on the freeways of Los Angeles, you know) while the basic premise of children forced to build their own society in the ruins of a destroyed world reminds me of Miri from the first season of Star Trek.  The issue ends with Sid somehow missing and a beautiful two-page view of what may be The City in the distance, making me think that our protagonists are about to embark on a journey to find out what Slug was babbling about.  The combination of really impressive art and a creative color palette make this one visually pleasing, though a couple of sequences require multiple views to fully parse.  Even with those issues, though, this is a great-looking comic book.

BOTTOM LINE: KIND OF A LOT, IN A GOOD WAY

There are some great moments to be had here, but perhaps the best is the presence of emojis that represent each of the characters on the inner front cover, getting past the “How in the hell do I figure out who all eleven named characters are?” problem in a very clever way.  What’s The Furthest Place From Here? #1 has opened up a lot of questions in an interesting manner, and while I find many of the story elements to be familiar in their antecedents, the beauty of the art and the best elements of the story combine into an impressive first issue earning 3.5 out of 5 stars overall.  There are elements of The Stand, bits of Phonograph and things that remind me of The Twilight Zone throughout, but I’m willing to see how these creators build those influences into something all their own.

WHAT'S THE FURTHEST PLACE FROM HERE? #1

A post-apocalyptic look at identity in the wake of the end of the world, this book has a LOT of familiar bits and bobs circling a center that doesn't quite hang together. There's promise in these pages, though.