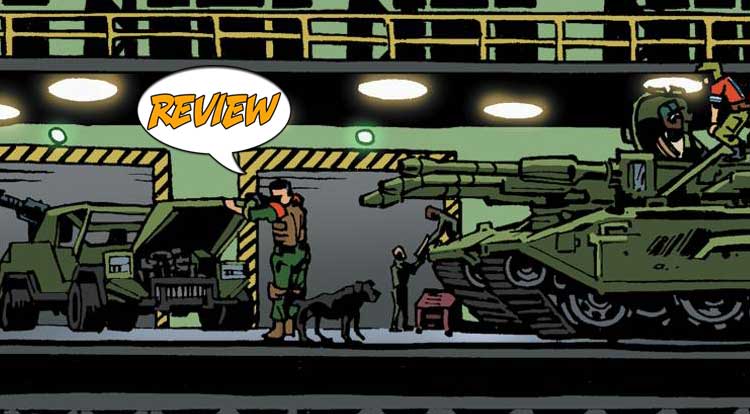 Even the venerable G.I. Joe team can use some new blood once in a while…  Get ready to meet the new recruits!  Your Major Spoilers review of G.I. Joe: A Real American Hero #287 from IDW Publishing awaits!

Previously in G.I. Joe: A Real American Hero:  So you’ve been recruited into the world’s most elite fighting force for freedom.  You’re one of the best of the best warriors the planet has to offer.  You’re ready to join the fight, but before you step onto the battlefield, you first have to step into…  THE PIT.

Years ago, the forces of Cobra set up a base in the Gulf of Mexico, codenamed Cobra Island, created by manipulating fault lines and creating their own sovereign state where no other country had sovereignty.  Mostly abandoned after a major global push, Cobra has recently returned to Cobra Island and begun assembling a new base.  G.I. Joe : A Real American Hero #287 opens with a contingent of Joes, led by wilderness specialist Outback and comprising mostly new recruits.  Multo (Ghost in Filipino) and Interpol agent Sherlock scope out the docks, discovering that Cobra is building a casino in the rubble of their old Terrordrome, while computer specialist Black Hat and Mongoose sneak into the casino to download information about what’s going on inside, giving us little bits of their background as they go.  Mongoose joined the military after 9/11 rocked his Islamic family, while Black Hat found her calling in programming after being repeatedly told that girls aren’t good at that sort of thing.  Both their stories are nicely interwoven into the narrative, ending with the team escaping with (presumably) Doctor Mindbender’s secret plans.

This entire issue is a night mission of infiltration, and I’m impressed with how well Penn’s art conveys that.  It’s always clearly dark without ever being muddy, and a sequence where Shipwreck and Cutter have to draw Cobra away from their teammates is truly beautiful, both in terms of the equipment (all the vehicles shown are recognizable at first glace for the Joe aficionado) and in the emotions, as Shipwreck desperately tries to get the incoming ‘copter’s attention without himself getting killed.  As for the story, Hama plants the seeds for the next arc while picking up threads with the team’s new recruits, all of whom are interesting additions to the team.  Naysayers will probably whine about “diversity” (Black Hat is of North Indian Brahmin decent, Multo is the team’s first Filipino agent, Mongoose is the first Joe to practice Islam, while Sherlock is both Black and disabled) but honestly, there’s no reason to listen to those voices, and what’s more, G.I. Joe has always been about representation.  Each of the “new guys” gets a moment in the sun in this issue, but the more important part is the secret plan hiding in plain sight and involving… The Brainwave Scanner!

As one of the old dudes of comics, I bought the G.I. Joe #1 treasury edition at the local department store back in ’82, but you won’t need 40 years of continuity to appreciate and understand this book.  I only mention it because G.I. Joe: A Real American Hero #287 reminds me of those halcyon days when everybody was reading G.I. Joe and this issue is as good as any of those, with really good-looking art and a story that reminds us why Hama is called a living legend of comics, earning 4 out of 5 stars overall.

Hama's still got it, and new artist Billy Penn brings his A game to match the man who's been writing G.I. Joe since 1982. Add in a few new Joes to spice things up and you've got yourself a really good heist "movie."