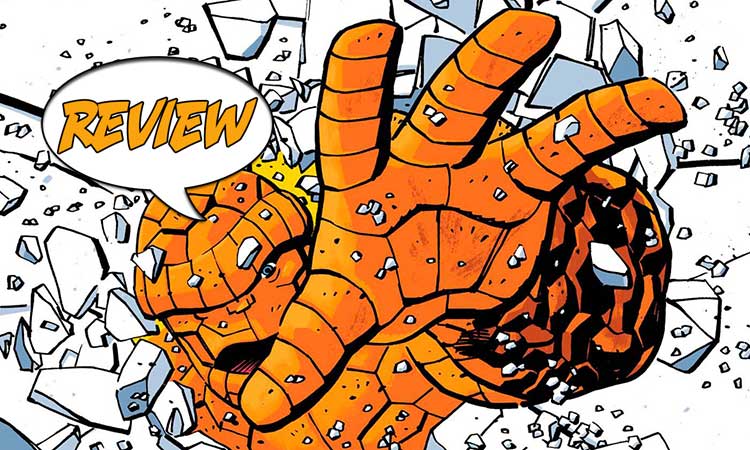 The big, blue-eyed lug from Yancy Street is back, but is there anyone there to welcome him?  Your Major Spoilers review of The Thing #1 from Marvel Comics, awaits!

Previously in The Thing: A lonely evening and a chance encounter sends Ben Grimm embarking on a sojourn that will have him encountering – and battling – figures both old and new.

A NOT SO WARM WELCOME

The Thing #1 opens up on a New York street with a hooded skeletal figure walking down the sidewalk.  After encountering some pedestrians he goes up an apartment building and breaks into one of the dwellings.  He quickly subdues the resident, then takes his heart and replaces it with a crystal necklace.  At the Baxter Building, Ben Grimm arrives home from a vacation to find that no one is home.  The rest of the Fantastic 4 are out of town.  He then tries to call his fiancé Alicia but gets her voicemail.   Ben then leaves.  Elsewhere in the city Ben comes across Alicia walking with her guy friend.  Ben confronts her and through a series of misadventures ends up throwing a car across the street.  This gains the attention of the NYPD who promptly arrest The Thing and throw him in a superpowered jail cell with Hercules as his cellmate.  The two talk for a bit with Hercules mentioning that he sees a dark spirit hanging over Ben.  The two then combine forces and break out of the jail.  That night Ben meets up with Alicia who breaks up with him.  He’s then visited by a flying fairy looking representative of a dating service, offering Ben their assistance.  He falls asleep and in his dream, he’s visited by the hooded figure from earlier who calls himself Mot.  When he wakes up, he accepts the dating services help and they pair him up with a dancer and things don’t go quite so smooth.

I NEED A BREATHER

The speed at which things happen in The Thing #1 is deceptively quick.  Upon the first readthrough it feels like a typical first issue, there’s a bit of an introduction, the status quo is upended, and we’re left with a cliffhanger.  But when you go back and think about this issue in detail it becomes apparent just how much stuff is in this book and how little connective tissue there is to bring it all together.  In this same issue we have a scene where The Thing uses a chunk of vibranium to break out of jail, a pixie appears to him to try and set him up on a date, a guy who looks like the grim reaper is ripping hearts out, and one of the longest running relationships in the Marvel Universe is ended partially because of a pepper spray wielding artist who’s trigger happy.  On one hand, this works for this book, which is itself an homage to silver age Fantastic Four, the reader is experiencing most of these events along with Ben, who’s just as bewildered in some moments. Also, hidden in the quick pace is some nice foreshadowing and thematic strings that only reveal themselves by the end of this issue.  But, on the other hand there’s no getting away from the fact that the storytelling in this feels rushed as if it’s trying to get the build-up out of the way as quickly as possible.

The Thing #1 is a good-looking book.  It appropriately opts for a retro style with flat colors and solid blacks rather than gradient shading which makes everything on the page just pop.  The colors used have a faded quality making this whole issue almost feel like a flashback which is a nice touch.

The Thing #1 is a well-intentioned homage to The Thing stories of the past that has pacing issues and doesn’t connect its events well.  But, the things that happen in this book are fun to read and left me intrigued to see what comes next.  The art is the star here though.  Good use of color, smooth action sequences, and selective detail gives this a look that’s dripping in retro stylings but still feels like it belongs in 2021.   3.5 out of 5 stars

The Thing #1 does enough to sow interest in coming issues but itself is a flawed story with pacing issues wrapped in gorgeous packaging.