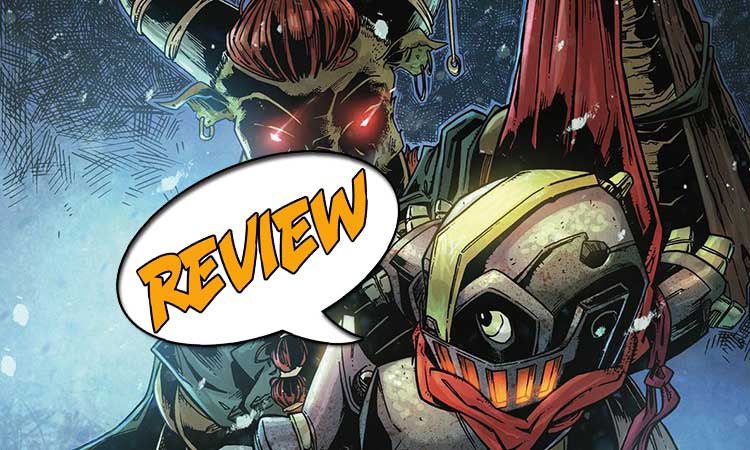 At long last, Canto and Aulaura have found the Vikus. Can he persuade them to join his forces, or will they see him only as the threat that led the Shrouded Man to them? Find out in Canto III: Lionhearted #4 from IDW Publishing!

Previously in Canto III: Lionhearted: In order to defeat the Shrouded Man, Canto has an ambitious plan – to find the Vikus (the Slavers) and try to enlist their help. Falco and Rikta take a small group with them to sneak directly into Dis where the discover the Shrouded Man’s army is on the move. Before they can escape, they are captured. Canto and Aulaura go to the Frysta Wastes following Bodil’s map. There they find nothing but snow. But late at night, Canto is transported to a place of memory where he meets a Fury. She is desperate to recover memories of what her life, and that of her sisters, was like before they became servants of the Shrouded Man. Canto does not trust her and will only help if she can help turn the Shrouded Man’s army away. He wakes up only to find the ice around him and Aulaura shattering!

INTO THE HANDS OF AN ENEMY

Canto III: Lionhearted #4 opens immediately after Canto is saved from falling with the shattering ice by the Vikus. He demands to know how Canto found them and threatens to drop him back into the abyss if he does not answer quickly. Canto accuses them of hiding, which is bold, but Canto is still quite small compared to the Vikus.

He tells them the truth, that he found them by following the information in Bodil’s papers. This seems to irritate Rune, the leader of the Vikus, even more, especially when Aulaura flings a bag of books and scrolls at his feet. But he decides to bring them to his settlement and spend some time looking over Bodil’s documentation.

Rune reads the papers, then casually asks after Bodil. When he finds out she is dead, he shrugs is off saying she was a coward and left them all enslaved to the Shrouded Man. Canto stands up for her, repeating her story that her family would have been killed had she returned. And then it comes out – Rune is one of her sons, the only one who survived. They grew up not realizing that they were slaves until they reached adulthood and were given the choice of becoming a Slaver instead. Bodil and Rune’s brothers stood up to the Shrouded Man. His brothers were killed; Bodil fled. Rune survived.

Still, Canto stands up to him. He is not here to avenge his beloved, he states. Revenge is not enough. He dares the Vikus to stand alongside of him and defy the Shrouded Man. Rune agrees to let him speak to the Vikus and let them decide.

In Dis, Falco, Rikta, and their friends are in prison. There is a bit of levity as they need to make a pyramid in order for one of them to peer out the window. But Falco feels he has let Canto down. His plan has failed. Rikta challenges him to try to come up with another one.

And back in the Frysta Wastes, Canto walks out into the snow alone to face the Fury.

The art of Canto III: Lionhearted #4 is technically stunning. Despite the complexity of some of the scenes, character orientation is absolutely clear and the facial expressions are easy to read. Panels flow along supporting the script in a way that we can follow effortlessly and still feel the full impact of the drama. To top it off, most of the characters seem to have some sort of flowing cloaks that are impeccably drawn so there is always a sense of movement. The encounter with Rune is full of tension and we feel his strength and power. He is in control. While we can just as clearly see that Canto realizes he can never match Rune’s strength, the determination we have come to recognize in him shines through.

There are several wonderful details throughout as well. A couple panels feature characters caught as reflections in a focal point, which is quite a beautiful way to draw our attention to them. The Vikus settlement has the fascinating flavor of a village built in snowy lands, borrowing some features reminiscent of the Inuit and of the Vikings. The world building is incredible.

Canto III: Lionhearted #4 does not disappoint. Canto may have reached his destination, but in retrospect, that was the easy part. Now comes the difficult part – trying to find a way to work with a former enemy against an even greater one.

Canto may be small, but he has the courage to face his old enemy and offer up a hand in peace.