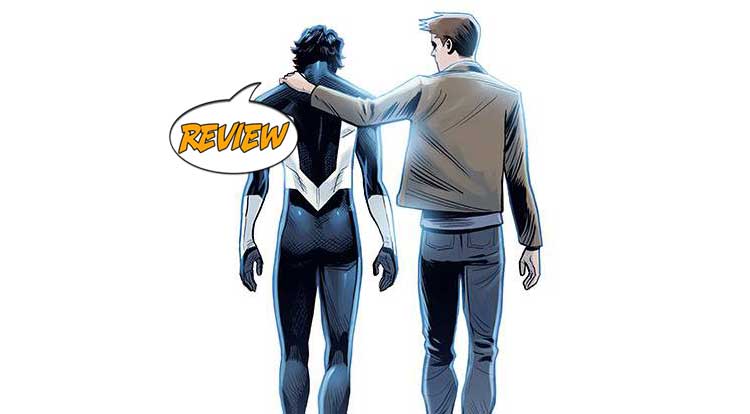 The immediate threat has passed.  Now, Radiant Black must deal with the fallout.  Your Major Spoilers review of Radiant Black #9 from image Comics awaits!

Previously in Radiant Black:  Time passes, slowly.  Lockport recovers.  But faced with a city that no longer wants him around and still reeling from unimaginable loss, Marshall has to ask:

Is it already time to leave town for good?

In the aftermath of the massive battles that marked the first eight issues, Marshall (does he have a last name?) is coming to terms with his new normal.  Every day, he visits his friend Nathan, still comatose in Gold Cross hospital, talking about the newest updates on their favorite movie series.  He continues to operate as Radiant Black, though he doesn’t really examine why there are suddenly so many villains with helmets running around, and no matter how hard he tries, the entity in his tech refuses to answer his queries.  His business is suffering a bit, as is his public image, but at least he makes peace with Satomi/Radiant Red and deals with Nathan’s ex-girlfriend.  Then, Nathan’s family makes the decision to take him off life support, a moment that Marshall thinks he’s ready to face, but suddenly freaks out and begs them not to stop.  Realizing that, somehow, his dreams are related, he vows to force his “patron” to talk to him…  by stepping in front of a moving train.

Nine issues in, I am running out of ways to be surprised at what Higgins has in store for us.  Indeed, I should probably start expecting every issue to end with an unexpected swerve, but once again, I didn’t see the end of this issue coming.  It’s truly touching to see Marshall’s devotion to his best friend, spending an hour or more with Nathan every day, but the most important parts of this issue all kind of slip by.  Why are there so many villains with helmets?  What is going on with Satomi and the other Radiants?  Is the running gag about C.O.W.L., Higgins’ previous Image series, becoming a multimedia franchise ever gonna stop being funny?  I dunno.  But the issue is a lot of fun in both story and art, which manages to go from the silly to the touching to the terrifying and back, ending with Marshall’s ultimate gamble, and doing it all well.  There’s a bit of Ryan Ottley in the faces and layouts, and if you know how highly I regard Invincible, you know that’s high praise.

In short, Radiant Black #9 is another in a series of comics that take the building blocks of traditional comics and assemble them into something wonderful, a story that manages to be both familiar and unexpected all at once, earning 4.5 out of 5 stars overall.  I will continue to let any and all comic fans know that Radiant Black is one of my favorite new series, and if you’re sleeping on it, you’re missing out.

It's a story that starts sweet, gets tragic, then goes completely bonkers. Highly Recommended.