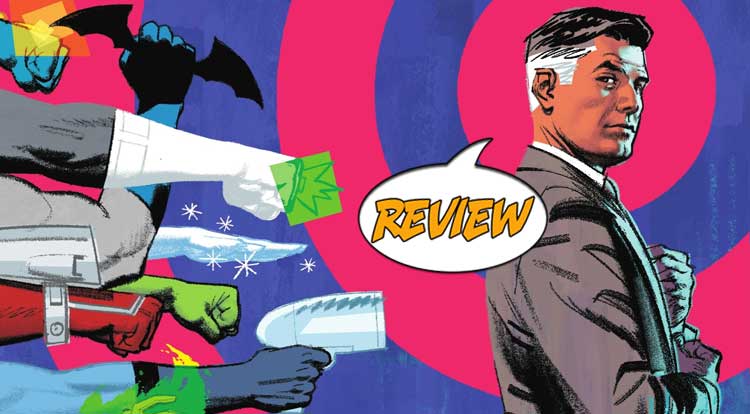 Christopher Chance is used to unraveling murders… just not his own.  Your Major Spoilers review of The Human Target #1 from DC Comics awaits!

Previously in The Human Target:  Christopher Chance has made a living out of being a human target-a man hired to disguise himself as his client to invite would-be assassins to attempt his murder.  He’s had a remarkable career until his latest case protecting Lex Luthor when things go sideways.  An assassination attempt Chance didn’t see coming leaves him vulnerable and left trying to solve his own murder… as he has 12 days to discover just who in the DCU hated Luthor enough to want him dead.

Human Target #1 opens in a hotel room, where Christopher Chance is going about his last moments on Earth.  He puts on his best suit (remarking that it still smells like “her”), writes his last words, and lies down… to die.  We rewind 12 days, each represented by a single-panel vignette in pastel hyper color, all the way back to Day 1, where we find The Human Target wearing the bald cap and false nose that make him a perfect double for Lex Luthor.  He gives Lex’s latest presser, but before he can reveal whatever the billionaire jerkass has in store, a bullet cuts him short.  Chance is actually taken off-guard by the impact, but still manages to gather his wits long enough to take down the murderer, but during his debrief with Luthor, he loses consciousness.  Awakening in his car, he once again passes out, crashing into a tree, awakening to find that Luthor has called the Justice League to help him, but Doctor Midnight has bad news for him:

He has been poisoned, and there doesn’t seem to be a cure.

THERE’S ONLY SO MANY FIGHTS YOU CAN WIN

There a couple of true joys that get me in The Human Target #1: The first is the dialogue, a first-person noir “voiceover” reminiscent of Sunset Boulevard and especially 1950’s D.O.A., with Edmund O’Brien.  When Chris (who is a bit older than when I last saw him) complains about the bad coffee or his ill-fitting bald cap or having to take a job from a corrupt schmuck like Luthor, it’s like a Dashiell Hammett story.  His refusal to be marked as “one of those super people” is important, but his terse and bitter response to Midnight asking about his friends is note-perfect.  Combine that aesthetic with Greg Smallwood’s incredible art, with it’s retro soft edges like a chiaroscuro drawing and the exquisite ’60s color palette, and you’ve got a perfect mesh of words and pictures.  Nearly every panel is wonderful, but the full-page shot of Chance’s silver MG crashed into a tree is nearly worth the price of admission by itself.

BOTTOM LINE: RUSH OUT IN A BUYING FRENZY

There are also some surprises to be had here, like the unexpected list of suspects and the filthy Luthor fingerprints on everything, making The Human Target #1 a truly amazing, enjoyable, fully immersive comic book experience, marrying excellent art with a compelling story for 5 out of 5 stars overall.  Based on this debut issue, I’m going to come back for the remainder of Human Target’s remaining eleven days on Earth.

This book is tense, effective, beautifully drawn and utterly unexpected, making it both a shock and a major success.