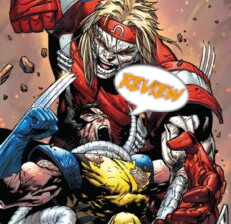 We return back to the 1980s run of Wolverine where Logan and Jubilee are in Japan trying to save two new mutants from being sold. Check out the story in X-Men Legends #9 by Marvel Comics!

Previously in X-Men Legends: Wolverine and Jubilee are investigating missing mutant sisters Hino-Chan and Yurei. Teaming up with Yukio, they end up fighting Jie Jie and the Hand who are trying to kidnap these twins. On top of that, Jie Jie has hired Lady Deathstrike. After a rough fight, Jubilee has been kidnapped by Lady Deathstrike and Yurei has teleported Wolverine to Shanghai to try and rescue her sister.

X-Men Legends #8 begins with Wolverine arriving in Shanghai to defeat the Triad gang members who are at the docks. Meanwhile, Jie Jie and Lady Deathstrike are transporting Jubilee and Hino-Chan, but they didn’t account for Jubilee’s resourcefulness. Jubilee is able to escape her confines and hide. When Wolverine and Yurei show up, Jubilee joins the fight. While the Hand and Lady Deathstrike fight off our protagonists, Jie Jie moves Hino-Chan to her buyer. She then unleashes another ally into the fight. Wolverine finds herself face to face with Omega Red! Wolverine is tired and hurt and Jubilee has been affected with Omega Red’s death spores.

To make matters worse a third party has arrived, and Sabretooth enters the fray.

SO MUCH TO KEEP TRACK OF

When I pick up an X-Men comic, I expect a lot of characters on the page and sometimes these books get crowded on the page. X-Men Legends #8 falls victim to this. Over the course of the story, we are introduced to a new city, two powerful mutants, the Triad, and a few other characters. And these introductions were scattered over the course of the book that it felt like I was constantly being introduced to new things and barely addressing the plot that was already set up. When a comic book does this, I find myself with reading fatigue. While the plot did develop and we do move forward, it felt like very little was being accomplished. Why are we introducing these characters? What are we setting up in the next issue? Whatever it is, I hope that it is worth it.

X-Men Legends usually hits a cool nostalgia factor for me. My family mostly read X-Men comics, so I remember reading a lot of these older runs when I was a kid. However, I struggled remaining interest in this one. Not to say that it was a bad comic, but it wasn’t what I wanted.  3 out of 5 stars for X-Men Legends #8 from me.

X-Men Legends #8 was a crowded story that feels like it is doing too much.