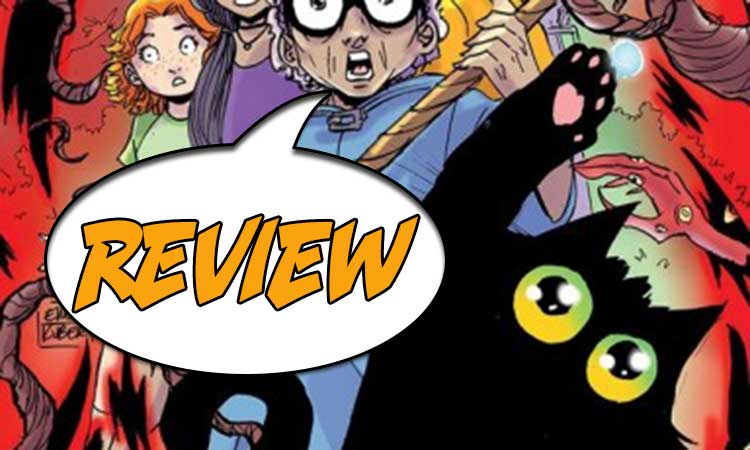 The Seeker’s fears become reality – the Realms are in danger from an increasing pattern of chaos. Will finding the Cat help fix things, and can the Seeker find the Cat? Find out in Inkblot #13 from Image Comics!

Previously in Inkblot: The Seeker continues to study the Cat. One thing leads to another, and she chases it through a portal right into the middle of Vironika’s and Vikka’s war and she gets killed. She opens her eyes to find herself in the Beyond, which seems like an afterlife, where she finds her brother Vallathrax. If she can find her body soon enough, she can zip back into it. It turns out the Beyond is a purgatory for spirits of those who have taken others for their power, like the Seeker’s family. A mob rushes them, the Cat opens a portal, and the Seeker falls back into her body. She returns to her library with Vallathrax as a ghost only she can see, and her brother the King summons her.

MORE THAN JUST A MISSING CAT

As Inkblot #13 opens, we learn that things are not going well in the Realms. Besides the battle in the Mountainlands, Illivanos has lost command over the sorcerers in the Depths and has not been heard from, and a dragon is loose in the Forestlands. Xenthos sees this as a pattern of chaos, and the Seeker believes all of this is tied to the Cat. She thinks she could use it to fix everything, if only she could find it.

She returns to her workshop where she is building a collar for the Cat, one that will relay to her its location. She hopes to use this to eventually control the Cat’s power. Vallathrax, or at least his spirit, pops in with a request. He wants her to build a body for him. She has some ethical qualms about this, but he points out her work researching magical creatures, which directly led to Xenthos touring the Realms for more of them.

Meanwhile, back on Earth, the Cat appears. This time, it is near a house where an old woman is training four young people in magic. Yes, these are a few more new characters, although one of them, Eliza, bears a strong resemblance to the Seeker’s family. Grannmah directs Eliza to kill a creature that looks sort of like a beaver crossed with a seal. She must destroy it to gain its strength, but Eliza plainly doesn’t want to. It’s too cute. And Eliza doesn’t think that using power simply to gain more is very nice. Instead, she names it, “Wally.” Grannmah talks about how all her power has been spent, much of it when she tried to reunite the Voidcat with its realm to heal the Void. Can she be the Seeker?

Meanwhile, the cat finds several rifts in turn where some kind of creature seems to be trying to break through. It boops the intruder, who disappears, only to try popping another appendage out in a new location. A breach opens in front of the house and a ropy tentacle reaches out and grabs Terrence. Grannmah recognizes the Cat, which boops the breach and seals it shut. But more and more breaches erupt around them all!

The art of Inkblot #13 uses the characters to add some amusing moments to a story that is becoming dire, considering all the known Realms are at risk for being destroyed. One such moment is a panel where the Seeker is concentrating hard on her work on the collar for the Cat. Before she realizes he is there, we see Vallathrax peering at the collar from right over her shoulder. When he speaks, she leaps away in surprise.

I like the sequence on Earth where the Cat is chasing breaches. Earth is pleasant and green, but the breaches that open up are an incongruous red. The body parts we see vary – a hand with very long claws for nails; some kind of tentacled body part covered in eyes. Plainly whatever is trying to sneak through has evil intentions. But the Cat acts for all the world like a cat chasing a laser pointer. Does it understand what it is doing, or can it simply not keep its curious paws of the interesting things that keep popping up?

Inkblot #13 connects more threads from earlier issues but introduces five new characters as well. It can be challenging to keep track of who is who especially since the Cat jumps through time and the Seeker’s family ages unnaturally slowly. But the story is starting to coalesce more around a focus which makes it feel more on track.

Is the mysterious black Cat the problem, or is it part of the solution?