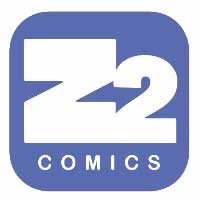 In the midst of another year of unprecedented growth, Z2 Comics announces a new addition to the company’s talent acquisition and development division, ahead of plans to increase the company’s output again in the coming year. “The exceptional quality of the books in Z2’s library was a major factor in my eagerness to join this team” says John Domingos, the newly appointed A&R Liason. “I am excited to help branch out to other avenues of collaboration, building off their impressive list of partnerships in the music space, to inspire individuals to think differently about the comics’ place in art and popular culture. Turning my misspent youth reading far too many comics into a career is a surreal situation and a genuine dream come true.”

“From the very beginning, I had always wanted a primary focus of Z2 to be providing a nurturing environment for talent” says Z2 CEO and Co-Founder Josh Frankel. “From providing a stable home for comics creators and their original work to creating a portal for other artists and musicians to tell original stories which built upon their brand, dedicating a department to this mission has been an essential part of our growth. I couldn’t be more excited to welcome John to the Z2 team.”

John Domingos brings more than 15 years of experience in the entertainment industry to the role of A & R Liaison at Z2 Comics, with the majority of that spent at the Paradigm Talent Agency, where he worked closely with many of the company’s top clients. A lifelong comic book reader, he often used his expertise to help colleagues and advise clients as they considered, and often booked, roles in the many television and film projects adapted from comics. Prior to his time agenting, John worked in the music industry as a roadie and ran a music label with some friends out of a dorm room while studying at Fordham University.

Please join us in congratulating John Domingos on this new role within this emerging entertainment company.