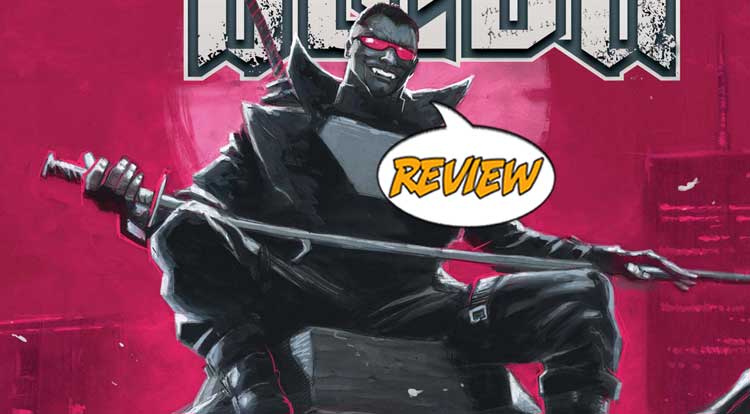 There are monsters in the dark, and heroes in the light, and only one man can walk with both.  His name is Blade.  Your Major Spoilers review of The Darkhold: Blade #1 from Marvel Comics awaits!

Previously in The Darkhold: Blade:  After reading from the cursed Darkhold, Blade and a cadre of other heroes were meant to enter Chthon’s dimension and stop the ancient god from destroying the Multiverse.  But reading the book has changed all their lives and histories… and for Blade, the consequences are far-reaching.

Vampires rule the world, and he rules over them all.

IN AN ALTERNATE REALITY

After Doctor Doom dug up the legendary Darkhold, five heroes (Iron Man, The Wasp, Black Bolt, Spider-Man and Blade) chose to read the tome and see what might have been of them in other realities.  For his part, Blade has found himself in a world where his ancient foe, Deacon Frost, sacrificed himself to a blood demon, exploding into a V-Wave of vampires. Billions of people on the planet became a vampire, while the superhumans became either humans or vampire, with their abilities negated by the V-Wave.  With the Inhumans, Eternals, and Asgardians gone, he is the only line between the few remaining innocents and the vampires.  Of course, there are other pretenders to power, such as Wilson Fisk, the Vampire King, whose vassal, Amadeus Cho starts this issue nearly getting killed.  Amadeus encounters Blade, telling him that he has a cure for vampirism, but starts to worry that Blade is possessed by blood god La Magra, bringing in the Last Avengers, a team consisting of Silver Sable, The Prowler and Citizen V to deal with him.

After last week’s Darkhold: Iron Man one-shot, and the Alpha issue, I had hoped this book would be equally impressive.  What I got instead was a pretty standard What If? scenario including the traditional bad ending for everyone heroic, without a horrific transformative moment that would turn Blade into his defiled self.  The art is interesting, but it feels a little bit light-hearted for the material, as Amadeus Cho faces what could be his doom with a big manga-inspired smile.  Blade himself looks remarkably young, and when Citizen V dies, the character hiding beneath his mask is shocking not only in the reveal but in the fact that he looks to be about 15.  There’s a big twist at the end, but in a way, the twist is a lack of a twist.  Adding to the visual disconnect is the muted color palette, which makes all the blood (and there’s A LOT) look pink rather than red.

BOTTOM LINE: A RUN-OF-THE-MILL ‘WHAT IF?’

Perhaps the most entertaining part of this issue was the cameo appearance of B-Negative, one of the poorly received New New Warriors as a receptionist.  All in all, though, The Darkhold: Blade #1 is an interesting experiment that shows the importance of appropriate art and coloring to a story, ending with an anticlimax and earning 2.5 out of 5 stars overall.  Maybe it’s the fact that we just finished the Age of Khonshu (and before that the Heroes Reborn crossover and Age of X-Man not long before) but I feel like maybe Marvel could lean a little less hard on the alternate realities.

The art and the story aren't on the same page, and while both are interesting, they final product doesn't elevate itself past "Pretty Okay". This is the third or fourth alternate reality in recent Avengers history, too.