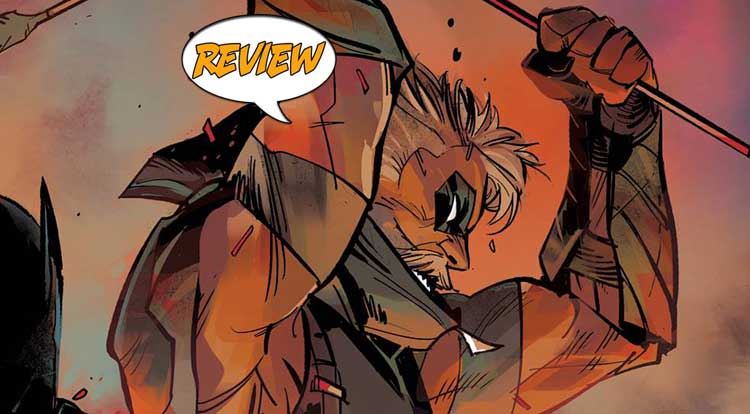 The Justice League is going to war… with the undead.  Your Major Spoilers review of DC vs. Vampires #1 from DC Comics awaits!

Previously in DC vs. Vampires:  The Justice League has long protected Earth from all manner of foreign and alien invaders over the years, always keeping a vigilant eye to the skies for the next threat. But what if the threat was already walking the Earth… hiding in plain sight… watching… waiting for their moment to strike.

As we open, a strangely bandaged man approaches the Hall of Justice, trying desperately to get to the heroes as he is stalked by unseen people (who are obviously Green Arrow).  He makes it halfway through traffic before getting hit, and Green Lantern arrives to take him into custody.  Inside the hall, he relays a desperate message: He’s Andrew Bennett, the titular I, Vampire, and he’s got bad news about the vampires of the world.  After the death of his former lover, Mary The Queen of Blood, the vampires are ready to declare war on the humans, and they’ve already hit their first targets.  The Legion of Doom is dead, save for a few vampiric survivors (Grodd and The Riddler are shown to be part of the blood-sucking crew), and he barely survived their assault with a possible cure for vampirism created by Lex Luthor.

That’s when Green Lantern reveals his own fangs…

I know that it’s the spooky season, but it feels like I’ve read this story before, and the parts that differentiate it from stories like Marvel Zombies, DCeased, and this week’s The Darkhold: Blade issue are in the gleeful cruelty of the violence.  Green Lantern’s murder of Wonder Twin Zan (including a snide remark about how his blood “tastes a little watery”) just feels cruel, especially given that the characters shown imply that this is the world of Super Friends.  I actually enjoy Schmidt’s art, though the puzzling decision to color the entire flashback with a blood-red film makes for muddy visuals that make up nearly half the book.  The reveals of who has and hasn’t been turned are well-handled, but the reveal in the last couple of pages made me audibly sigh, as it’s apparently gonna be another Batman show.  There are several mysteries still in play that could change everything about this comic, but the overall effect of this single issue is sadness.

The art is quite good, despite some coloring decisions that puzzle me, but the story of DC Vs. Zombies #1 doesn’t grab me, and there’s some lovely use of existing continuity to kick things off, but all in all it’s just an incredibly dismal experience, earning 2 out of 5 stars overall.  On the plus side, at least Hal Jordan could get staked!

And, it’s hard to imagine how they’re gonna bite through Kryptonian skin to give this world an evil Superman, so fingers crossed.

The death of the Legion of Doom was bad, but Zan's brutal, gleeful on-panel murder makes this one a depressing slog, and the last panels indicate that this is once again gonna be a 'Batman does it all!' story.