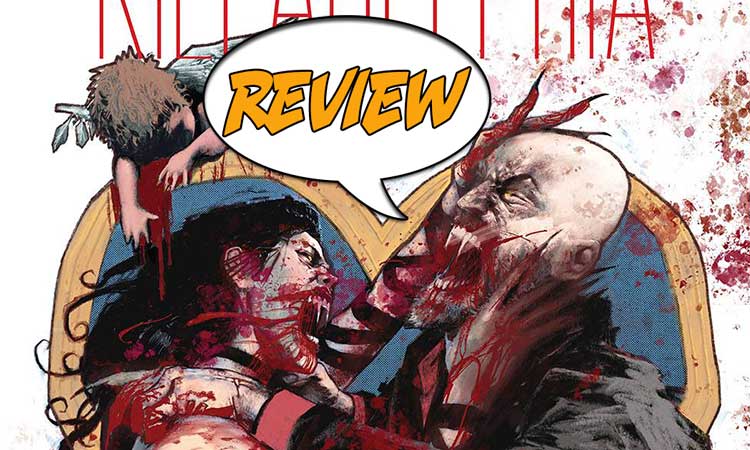 Anansi hints that the Sangsters may have new allies in their fight. Who are they and where do they come from? Find out in Killadelphia #18 from Image Comics!

Previously in Killadelphia: Thomas Jefferson, through Jupiter, has joined forces with Abigail. SeeSaw talks to Anansi and convinces him to help rescue Jimmy Sangster. Brianna, a former vampire, has become human, but her blood is special, and SeeSaw wants some of that as well. When he gives her blood to Jimmy, he faces off against himself and his own sense of failure and insecurity. The battle to regain his humanity is internal, not external.

A MADHOUSE OF BLOOD

John Adams ruminates about his actions in life, and in his afterlife, as Killadelphia #18 opens. Philadelphia is a blood-soaked warzone and he feels responsible for setting things in motion. Guilt moves him to fight along side the people now under siege.

He is not the only one having a moment of guilt. Jimmy and Jose have a short time to celebrate his return to humanity, then he comes clean about a relationship he walked away from with no explanation. He doesn’t want to be that kind of man, and he admits to wanting to be more straightforward, like his father. James has his own guilt about the kind of man he was.

Seesaw and Anansi observe the carnage from a rooftop. Anansi will not stop it. He loves his people, but that’s does not override their free will. Below the, Abigail exults in the battle. Anansi takes his leave with a cryptic message that there may be help for them.

Abigail moves from neighborhood to neighborhood with her forces. The blood flows and the body count rises. Jefferson asks whether she is always this happy, and Toppy replies that she isn’t, but he hopes she stays this way. She is a force to be reckoned with, as though fueled by a couple hundred years of resentment. It is safer for them when her focus is directed toward others.

As James, Adams, and Seesaw head out into the night, we see the first whispers of another player. A Black woman faces a group of feeding vampires and reduces them to skeletons. She recognizes this as a battle she and her comrades cannot ignore. She steps out of the shadows and hails SeeSaw. She is Tituba. She was born in Italy, learned the ways of the Dark Realm, was burned as a witch, and died. She was reborn and came to Philadelphia to work with John Africa and MOVE. Their undead people have lived in the shadows and evolved on their own, saving their anger to focus on a future war, a war that appears to be here now.

I love how this book continues to incorporate people and events from history to show facets of where this country came from and what it has been going through.

Killadelphia #18 continues to be a book where the characters engage in some deep thinking and we are drawn to do the same. It is fascinating to see the juxtaposition in the art as it trades off between, for example, John Adams being introspective and Abigail and her crew running rampant through the streets. The violence is horrific. It is as though the vampires have gotten caught up in the crowd psychology of their actions, and the bodies pile up because they have lost any ability to stop what they have started.

Jimmy and Jose are the symbol of hope in this issue, their lives and their happiness are a beacon of brightness in this dark world. The new trio standing up to Abigail is now Adams, James, and SeeSaw, and an interesting trio they are, standing for different ages and different times, but standing together.

Killadelphia #18 is an impressive book, effortlessly building on current issues through the filter of vampiric horror. The writing is solid and the themes very thoughtful, and it is all topped off with fantastic art.

Are James, Adams, and SeeSaw strong enough to face down Abigail and her vampires?