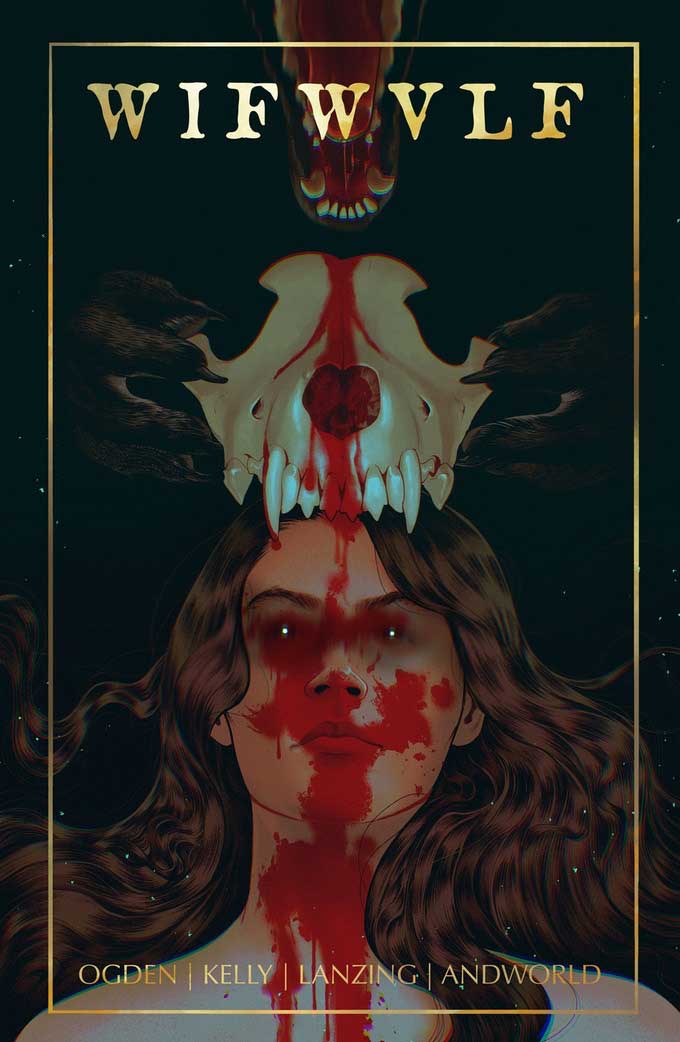 Vault has announced a partnership with Dailen Ogden, Collin Kelly, and Jackson Lanzing , the co-creators of WIFWULF, to publish and distribute the smash hit comic to comics shops and bookstores everywhere. WIFWULF is a beautiful comic about werewolves, bloody revenge, and deep loneliness that recently reached funding on Kickstarter. Vault has agreed to take on the publication and distribution of the Kickstarter edition of the book in exchange for the opportunity to offer a version of the book to comic shops and bookstores everywhere. Backers of the WIFWULF campaign will still get rewards unique to the Kickstarter campaign, including an exclusive foil cover, merch, and campaign-specific signed bookplates that will not be available in the direct market.

“I am beyond thrilled to welcome Vault Comics into our pack,” said WIFWULFartist and co-creator,  Dailen Ogden. “Vault has long been a champion of unique and high quality books, and their backing allows us to put WIFWULFinto many more hands–to bring our thrilling and unique story to the people who might need it most. Plus, as this campaign grows, their structure and expertise is exactly what we need to execute it in the smoothest way possible! We want everyone feeling excited and satisfied with the book in their hands at the end of the day, and I’m confident that their involvement will mean just that. It opens a thousand doors for WIFWULF that were previously shut, and we’re immensely excited to explore them with all of you.”

WIFWULF (stylized as WIFWVLF) is an original folklore myth telling the story of Charity Bjornsdotter, a young woman in 1860’s Montana who spends her days in the woods with her closest friend, a local wolf she calls Silver Slash. Charity is on the precipice of marriage to the handsomest man in her small village, the mercurial-yet-beloved Paul Skeld. But as her husband isolates her from Silver Slash, she begins to feel a call to the wilds…for it is there that her true destiny awaits. WIFWULF is the harrowing tale of a woman forcibly separated from that which makes her feel alive, a reinterpretation of the classic werewolf myth… and the origin story of a new goddess.

WIFWULF was funded in the first 9 hours, and deemed a “Campaign We Love” by Kickstarter on its first day. With over 800+ backers, it has  found a signficant and growing audience in the Kickstarter comic community. With Vault’s additional support in 2022, we’re confident this book will find an even broader audience  in comic shops and bookstores.

“Jackson and Collin are two of my oldest friends in comics, and — as everyone knows — I adore all the brilliance that comes pouring out of their hivemind,” added Vault Editor-in-Chief, Adrian Wassel. “Through them, I got to know Dailen, and I’ve watched carefully these past few years as they’ve improved from really-dang-good to melt-your-eyeballs-fantastic. The instant the WIFWULF Kickstarter went live, I was thrilled. Thrilled to see some of my favorite people working together, thrilled to back it, and then triply thrilled when we started to discuss partnering. This is one of those moments in indie comics that reminds you why you do it: working with your friends (again!), helping new and incredible voices like Dailen break out to an even larger audience, and doing it all as genuine partners. And, most importantly, WIFWULF is riveting — a dance of grace and brutality that will move any reader, but especially those who’ve found the courage to piece themselves back together after being hurt. I’m so honored to join the pack. Howl with us.”

“I’m deeply thankful to Vault for joining our pack – and after wonderful experiences on ZOJAQAN and DARK ONE, I’m so happy to rejoin theirs,” added WIFWULF co-creator and co-writer, Jackson Lanzing. “They’re the only publisher in the market that we’d even consider working with on a project as personal and strange as WIFWULF – especially after our incredible first few weeks of funding released us from any real need to do so! But we just trust and appreciate the folks at Vault implicitly and it was hugely gratifying to find enthusiastic partners who loved the work as fully as we did. This move helps guarantee fulfillment, quality, and reach, so we can both satisfy our incredible pack of backers and howl loud enough to be heard by those far from the woods. WIFWULF is still in our hands… but now we have a team of incredible and passionate professionals on our side to help make WIFWULF a reality.”

The Vault edition of WIFWULF will is planned to hit store shelves in mid-2022. The WIFWULF Kickstarter campaign is live until November 13th, 2021. You can learn more about it at https://www.kickstarter.com/projects/jacksonlanzing/wifwulf.