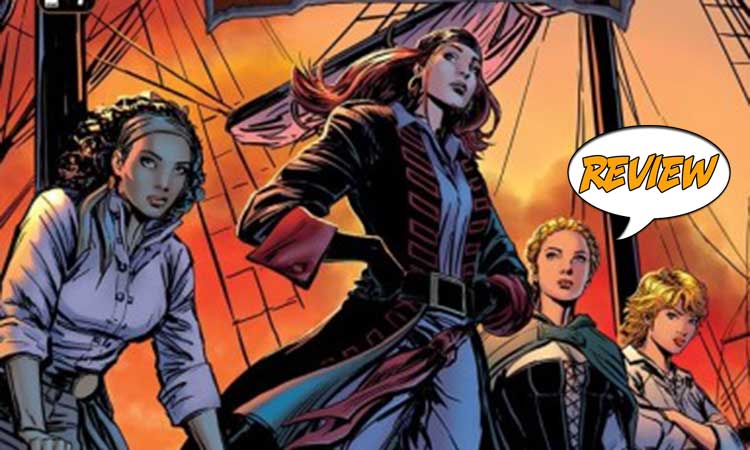 A Man Among Ye #7 Review

Amira has attached herself to Anne’s crew. Will this dangerous ally become a dangerous enemy? Find out in A Man Among Ye #7 from Image Comics/Top Cow!

Previously in A Man Among Ye: Woodes Rogers finds Jack Rackham sparring, and reminds him that he is supposed to find and kill Anne Bonny and the other women. Jack insists he is on the job, but to catch the women, he needs a woman’s help. Presumably that is Amira. After the ruckus in town, Anne and the rest of her crew have been jailed. Amira sneaks in, poisons a guard, and steals his keys. She finds the women and tells then she needs a pirate to help her go after some treasure. The women are skeptical but do follow her into the smugglers’ tunnels. Meanwhile, a bounty hunter arrives at the jail and finds the women gone!

A Man Among Ye #7 opens as the bounty hunter finds Anne and the other women. He does not care if the are dead or alive, as long as they go with him. Or at least if Anne does. They won’t give her up, and he starts making some comment about Amira when she throws her knife at him and hits him in the eye. This cuts him off, but not before Mary wonders about what he was hinting at.

Jack regales his new shipmates with tales of his pirate exploits. As he calls it a night, and they others talk of their eagerness to see Anne Bonny dead, he remembers a night from two years before. On that night, he asked if Anne was actually going to marry the man she was promised too. One thing leads to another, and he asks her to run away with him and she accepts.

Whether or not Amira is to be trusted, she gets them down to the shore not too far from the docks. But when it comes to climbing the ladder up to the main part of the island, Anne does not let Amira behind her. At the docks, word has just reached the soldiers on guard that the pirates have escaped. A knife takes one in the throat. Anne offer the two remaining a choice. They can trot off, leave their guns, and live, or they can take their chances with her and her crew. They agree to leave. The women barely have time to board their ship before the reinforcements arrive!

A COLORFUL LOOK AT PIRATE LIFE

The art of A Man Among Ye #7 is bold and dynamic. The many characters are quite expressive. We see this right from the start, but it also sets up the dynamic between Anne and Amira. The bounty hunter is as swarthy and ferocious as one might expect. Plainly he relishes his work, even moreso when there are women to capture. Anne is not intimidated in the least, dodges his knives, and hits him with a solid punch. Amira’s knife skill comes as a surprise to all, especially the bounty hunter. Even Anne cannot keep her face expressionless. But when Mary confronts her, Amira puts on the most cunning innocent face I’ve ever seen.

Jack Rackham has been set up so far to appear completely on Woodes Rogers’ side. To see him recall the day he asked the memorable Anne to leave her placid life on shore to run away with him makes us wonder if this is truly the case. Does he still have some fondness for her? And it is a breath of fresh air to see her as she was, a woman daring to break the mold of eighteenth-century womanhood. She cannot yet imagine that her decision that day will lead her to where she is now.

BOTTOM LINE: THE TRAP CLOSES IN

A Man Among Ye #7 is still a solid pirate adventure. Amira is an interesting addition, but unfortunately, focusing on her means that Mary, Jane, and Iris are relegated to the background. Despite this, it remains an entertaining read.

It’s hard to keep a pirate in jail when they have an unexpected ally.