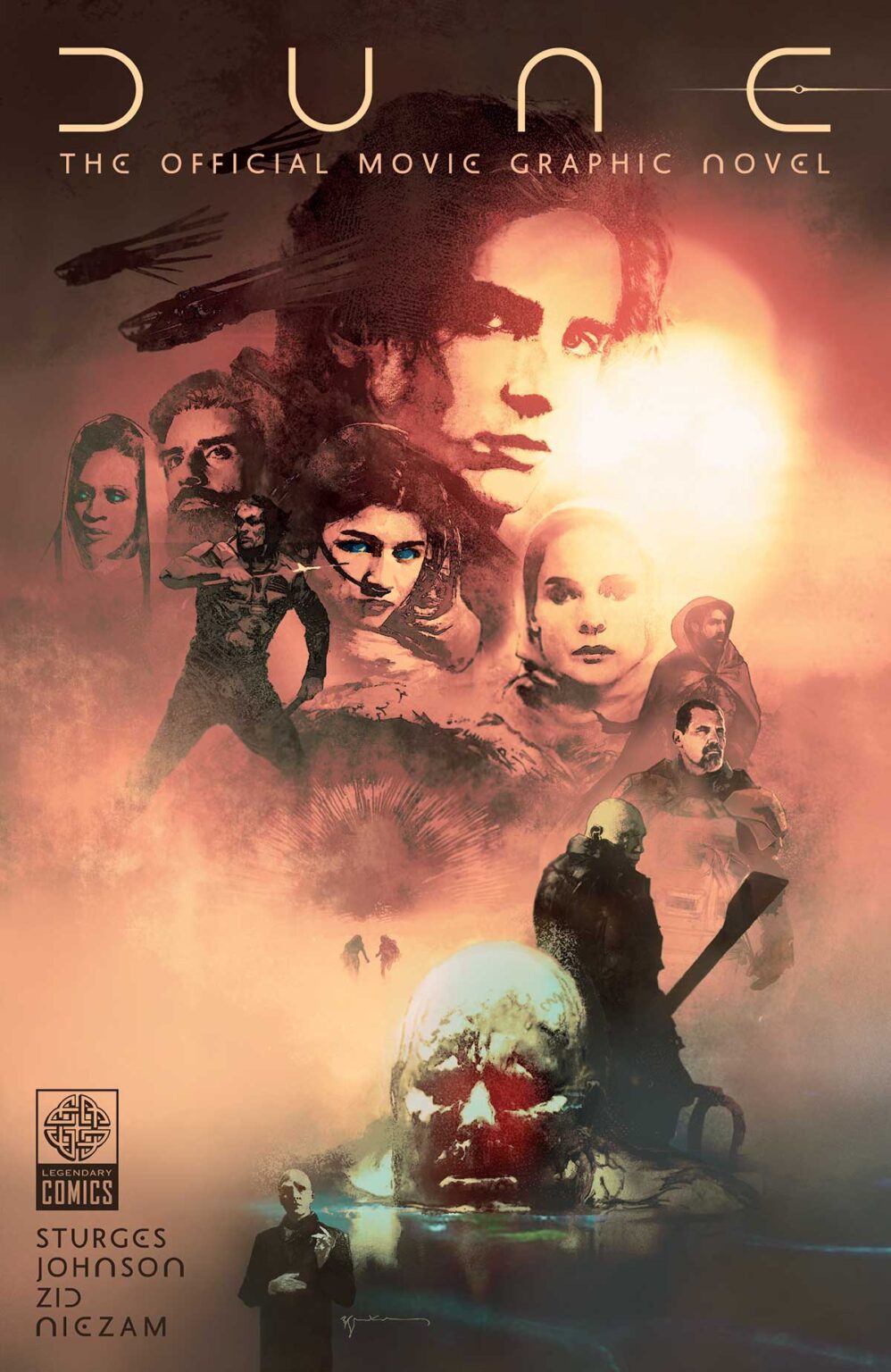 Legendary Comics, in cooperation with Herbert Properties, LLC, announced today the official movie graphic novel based on Warner Bros. Pictures and Legendary Pictures’ Dune, the critically acclaimed film adaptation of Frank Herbert’s seminal bestselling book from Academy Award-nominated filmmaker Denis Villeneuve. Both the graphic novel and the film, currently in theaters worldwide, tell the epic hero’s journey of Paul Atreides (played by Oscar nominee Timothée Chalamet). Dune: The Official Movie Graphic Novel, adapted by writer Lilah Sturges (Legendary Comics’ The Science of Ghost, Lumberjanes) with art by Drew Johnson (Legendary Comics’ Godzilla: Aftershock and Godzilla Dominion) and colors by digital painter Zid (Legendary Comics’ Kingdom Kong) and colorist Niezam, features beautiful artwork that brings the cinematic vision of Dune to the world of sequential art. Limited editions of the graphic novel are now available for pre-order today exclusively on Kickstarter, with the book trade edition to follow. Both editions are set  to be released in February of 2022, and fans can now pre-order all editions at https://www.kickstarter.com/projects/legendarycomics/dune-official-graphic-novel.

Partnering with Rocketship Entertainment, the limited-edition Kickstarter releases of Dune: The Official Movie Graphic Novel feature four distinct covers. Comic legend Bill Sienkiewicz, who created the original Dune comic for Marvel in 1984, returns to the Dune universe to contribute the cover for the graphic novel. Three additional variant covers from Drew Johnson and Zid, U.K. illustrator and comic artist John Ridgway (2000 AD, Hellblazer, Doctor Who), and comic legend Tim Sale (Batman: The Long Halloween, Superman: For all Seasons) will also be available. Exclusive merchandise and collectibles will also be offered through Kickstarter.

“As a fan of both the book and our film, I wanted to bring Denis Villeneuve’s amazing vision and this all-star cast to the world of comics, and with the cooperation of Brian Herbert and Herbert Properties, LLC, we have done just that with an amazing group of creators,” said Robert Napton, Senior Vice President of Legendary Comics.

A mythic and emotionally charged hero’s journey, Dune, based on Frank Herbert’s seminal novel, tells the story of Paul Atreides, a brilliant and gifted young man born into a great destiny beyond his understanding, who must travel to the most dangerous planet in the universe to ensure the future of his family and his people. As malevolent forces explode into conflict over the planet’s exclusive supply of the most precious resource in existence—a commodity capable of unlocking humanity’s greatest potential—only those who can conquer their fear will survive. The film stars Oscar® nominee Timothée Chalamet, Rebecca Ferguson, Oscar Isaac, Oscar® nominee Josh Brolin, Stellan Skarsgård, Dave Bautista, Stephen McKinley Henderson, Zendaya, Chang Chen, David Dastmalchian, Sharon Duncan-Brewster, with Oscar® nominee Charlotte Rampling, with Jason Momoa, and Oscar® winner Javier Bardem.

For a high-resolution version of the Dune: The Official Movie Graphic Novel cover and variant covers, please visit: https://bit.ly/3mces9p.

Lilah Sturges is the writer of numerous comics, including the PRISM Award winning Lumberjanes: The Infernal Compass, The Magicians and Legendary Comics’ upcoming The Science of Ghosts, as well as many other titles from DC, Marvel, IDW, and others. She lives in Austin, Texas with two daughters and two cats.

Drew Johnson has been a professional illustrator for over 20 years, working on comics such as Wonder Woman, Wonder Waman ’77, Sensation Comics, Supergirl, The Authority, Batman: Legends of the Dark Knight, Spider-Man, Fantastic 4, GI Joe, Star Wars, Tomb Raider, & many more.  Drew’s contributions to Legendary Comics’ Monsterverse include illustrating Godzilla: Aftershock, the official graphic novel prequel to Godzilla: King of the Monsters, and Godzilla Dominion, the official graphic novel prequel to Godzilla vs. Kong, as well as contributing the cover art on the final issue of the Kong: Skull Island series.

Zid was born 2 days after Christmas in 1983, he is living his childhood dream drawing and painting what he has always been most passionate about: comics. He is a multidisciplinary artist based in Malaysia and was nominated at #8 in 10 Comic Book Creators To Watch in 2013 on Newsarama.com for his maiden project with Robert Napton, his career with Legendary Comics began with Trick ‘r Treat: Monster Mash late 2015. This work relationship continued with the digital graphic novel prequel to the Netflix movie Spectral: Ghosts of War in 2016, and his biggest responsibility yet, Skull Island: The Birth of Kong in 2017. After a change of terrain with Lost in Space: Countdown to Danger, he is returned to Skull Island for Kingdom Kong. In his free time, (which is not a lot) you can see him updating his social media accounts with his slice of life comic as a work-from-home dad under the hashtag #DOAWFHD.

Born in 1920, Frank Herbert worked as a newspaperman while struggling to become a successful author.  His second novel, Dune, won the prestigious Hugo and Nebula awards in the 1960s, but with only modest book sales.  Gradually, readers began to spread the word about what a truly great, highly-imaginative novel it was, and it became a worldwide phenomenon, translated into many languages.  Today Dune is the most admired book in science fiction and has sold millions of copies around the world.

Legendary Comics was born out of a passion for mythic entertainment, seeking out new talent and working with the best and the brightest in the industry to create transportive worlds, inspirational characters, and spectacular adventures that leap off the page. Founded in 2011, Legendary Comics has produced an exciting catalogue of original titles that continues to grow and evolve. From partnerships with industry legend Frank Miller to Grant Morrison’s Eisner-nominated Annihilator, Legendary Comics has a passion for innovative new stories, including the fantasy graphic novel The Heart Hunter, the historical fiction story Championess (based on the true story of Elizabeth Wilkinson) and Jessica Chobot and Erika Lewis’ hit webseries, Firebrand: The Initiation of Natali Presano. In addition to original titles, Legendary Comics also expands the scope of the cinematic universes of its parent company Legendary Entertainment, by bringing big-screen adventure exploding onto the comic book page. Working with the visionary filmmakers and the architects of Legendary’s Monsterverse, they have delivered the level of quality and authenticity our fans demand with New York Times best-sellers such as Godzilla: Aftershock, Pacific Rim: Aftermath, and Skull Island: The Birth of Kong, to name a few. http://www.legendary.com/comics.