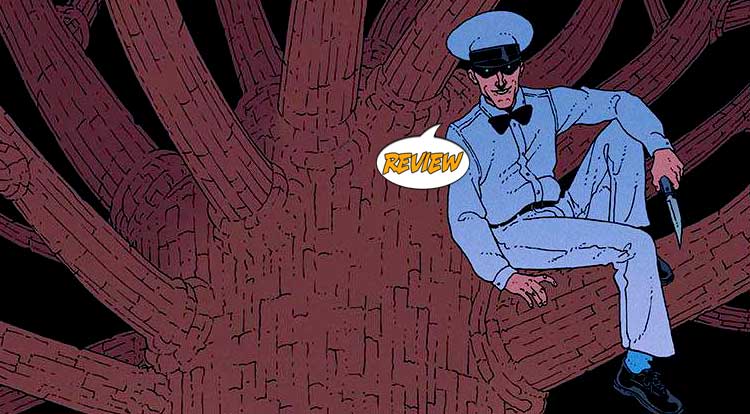 Previously in Ice Cream Man:  Sometimes, writing the “What Has Gone Before” section is difficult, but it’s never more so than with a book like this.  The basic gist is that there’s this dark force in the universe that manifests itself as a seemingly innocent purveyor of sweets, but is in fact a multi-limbed monstrosity of cosmic unpleasantness.  Whether that’s garden-variety body horror, existential angst, fear of the abyss, or just plain ol’ nightmares varies.

So what’ll it be this time?

Ice Cream Man #26 begins with Michael, who is investigating his family tree.  (Since this is Ice Cream Man, we’re seeing an actual tree.)  He has successfully traced his lineage back three generations, to the first Arvek to come to the United States in search of bounty.  Sadly, that great-grandfather also shares Michael’s dedication to opiates, though in pipe form in a seedy den rather than over-the-counter.  Worse still, his one skill, calligraphy, was supplanted by the printing press.  Michael’s grandmother, Mary Ellen was likewise an addict, though her vice was whiskey, which led to her death by childbirth.  Michael’s dad was a Vietnam-era hippie who loved his LSD, whose hallucinations included the delusion that “the world is haunted by a man in an ice cream truck.”  As he works he way down the tree, Michael slips and falls, crashing to the ground… Or rather, through the ground into the very roots of his family history.

“TO BREAKING THE CYCLE!”

Ice Cream Man #26 reminded me greatly of issue #18, a terrifying story of a man’s battle with Alzheimer’s, and I actually had to check to make sure that this wasn’t the same family.  (I’m pretty sure that it isn’t.)  But the appearance of the terrible goblin from that issue, the creature who stole George’s memories, is a chilling reminder of that story and its entirely too real horror.  The ending of this issue is likewise full of entirely understandable fear, as Michael wonders if he can overcome his genetic predispositions and be a decent father, or whether he’s doomed to destroy his hypothetical child’s life as well.  The visuals of this issue are extra-special, in that the issue must be rotated ninety degrees and read horizontally, and Morazzo once again delivers.  There are a number of side-moments (like a bird caught in the web of a HUGE spider) that are amusing, but the emotions of Michael and his late family members are perfectly “acted” under his subtle pencils.

Best of all, in my eyes, is the ending of Ice Cream Man #26, a moment that takes the accumulated moments of the story and the recurring questions about identity, genetics, and reality, and somehow still ends on a high note, followed by a reminder to rotate the book back before closing it, combining for a dead-solid 5 out of 5 stars overall.  During the scary season of October, it’s doubly important that we engage with the process of telling scary stories around metaphorical camp fires, but it takes a really skilled creator to do so and still make the experience weirdly inspiring at the same time.

If you’re not reading Ice Cream Man, my friends, you’re missing out.

Sometimes the worst horrors are the mundane, human moments of terror, and this comic perfects encapsulates that.