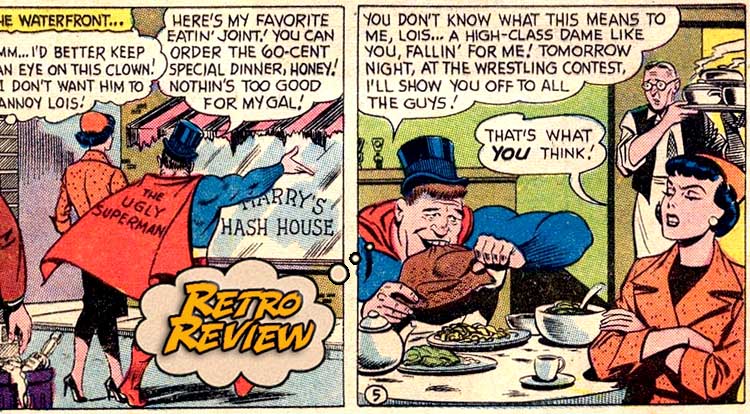 Previously in Superman’s Girl Friend Lois Lane:  Thanks to the advent of television, professional wrestling turned from a legitimate “shoot” sport to a much more gimmicky affair, where the athletic performances were sublimated into a story-telling approach, and the wrestlers became full-fledged characters, rather than just wiry tough guys named Vern.  Gorgeous George, for one, brought theatricality to the ring that changed the game forever.  And, of course, Superman was there!

Or, at least, Lois Lane was. Strong-armed by Perry White into providing a woman’s perspective on wrasslin’, Lois is elbow-deep in hot dogs and kayfabe when a legitimately superhuman performer steps into the ring and thrashes not only his opponent but the ring itself!  Lois, having NO idea of the role of a heel (the evil wrestler who squashes his foes and absorbs the boos of the crowd) writes a glowing feature of Ugly Superman, buttering the grappler up to get him on the record. Remember this moment friends, as Ugly Superman manhandles Clark Kent with his clearly over-the-top strength and hamlike fists.  It’ll help justify what happens later.  Ugly Supes beats the stuffing out of the “helpless” Kent, convincing a tearful Lois to beg him to stop, offering to go out with him to stop the carnage.  (A little red-ink-fake-blood and super-speed fake black eye makeup from Superman help sell the con.)  Ugly Superman takes her out, vacillated between chauvinist and regular pig, ruining the opera and her appetite.  Shaffenberger’s wonderful balance of the cartoony and the mundane makes the whole thing sing, especially when the wrestler drags Lois to his gym to show off, only to meet a new wrestler called Methuselah! The seemingly feeble old man (who looks a bit like Moses) turns out to be Superman, which you already know, as you’re savvy folks and also it’s ridiculously obvious.  Enraged at being showed up in front of the boys, Ugly Superman attacks the old guy, only to find a foe tougher than Clark Kent. The Man of Steel (correctly) assumes that if he embarrasses Ugly Superman enough, that the grappler will be humiliated enough to leave Lois alone, and uses his super-powers to mess up Ugly Superman’s afternoon.  It’s kind of sweet to see the future couple in action, with Lois trying to protect Clark and Superman ready to defend her honor by roughing up a buzzcut from Flatbush, but it’s still kind of disturbing.  Of course, there’s little chance of Ugly actually getting hurt, which helps take the curse off it, but…  I’m still a little bugged by Superman toying with even a rude sexist who forces Lois to go out with him. But, as Lotto reminded B. Rabbit in The Shelter, all’s well that ends okay, and Ugly Superman’s career seems to to be going even better after his humiliation, thanks to a little bit of plastic surgery and a face turn.  As with any comic this old, it’s hard not to be bothered by the retrograde gender politics in play, but I do appreciate that it’s Lois who gets to call the shots throughout most of this story, even if she only went out with the big lug to protect her friend.  Superman’s Girl Friend Lois Lane #8 is also the issue where Lois takes on her absolute best super-costume ever in the lead feature, meaning that there are additional reasons to love this issue other than Schaffenberger’s evocative art and a clever story, leaving this issue with a well-deserved 4 out of 5 stars overall.  I had thought that there was an actual Ugly Superman in the wrestling industry during this era, but I can’t find any documentation of it, so I may just be confusing childhood memories with the sub-plot of Hollywoodland.

Ugly Superman is rude and crude, but Lois makes a pretty good show of herself and Superman has some fun. Plus: The Best Superwoman Ever!