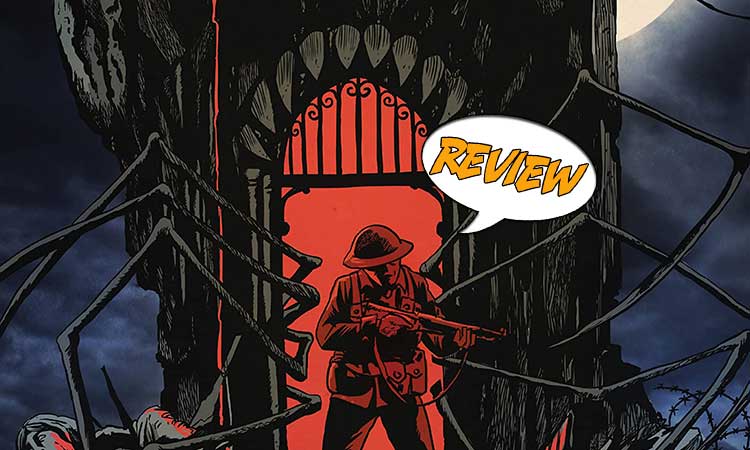 Night of the Ghoul #1 Review

In his hunt for the truth, a movie fan might have wandered into a horror far worse than he’s ever seen on screen.  Your Major Spoilers review of Night of The Ghoul #1, awaits!

NIGHT OF THE GHOUL #1

Previously in Night Of The Ghoul: A man and his son are on the hunt of the creator of a long lost horror film and the pair believe they’ve narrowed down his location.

A TALE OF TWO NIGHTMARES

Night of The Ghoul #1 opens up with a father and his son travelling down an empty road towards a retirement home.  Through a bit of slick talking, the father gets the doctors permission to talk to one of the residents there.  The son, not thrilled to be there, decides to stay in the lobby.  In the room, the father meets with a very old and ill man.  The father reveals he knows that the man isn’t who he says he is, but instead, a horror film director named T.F. Merrit.  He references a movie that Merrit directed called Night of The Ghoul that apparently was lost in a fire.  Things then switch to scenes from the movie which show a team of soldiers in World War 1, scouting an abandoned village.  Back in the patient’s room, Merrit and the man discuss the nature of The Ghoul, with Merrit insisting that it’s far more real than everyone thinks and that because of his arrival, the father has forced a secret cabal’s hand and that none of them will survive the night, so Merrit agrees to tell him the rest of the story. That story then picks up with one of the soldiers making the first encounter with The Ghoul.

The dual storylines in two different time periods trick isn’t new, nor is it particularly uncommon. But, that doesn’t mean it can’t be done well, especially if it’s employed via a clever way.  That’s exactly what Night of The Ghoul #1 has.  Having the main character of the “modern” plotline, tracking down the director of an old horror movie, while existing in a universe that resembles an old horror movie is just “meta” enough to give this an engaging premise while not being pretentious.  Also, with the inclusion of a possibly unreliable narrator that can interacted with by other characters just takes the potential for twists and turns, up a notch. Beyond just the setup and gimmick, there’s a real sense of dread here and the lore put in place gives the threat an ambiguity that it’s difficult to predict what’s in store for the rest of the series.

There’s no getting around it, Francavilla is one of the best in the game right now, especially when it comes to throwback pulp style.  So, giving him a story that really benefits from that style of art, makes this a homerun visually.  Only Francavilla can somehow make something seem dark and gloomy using a creamy yellow and tangerine color scheme.

BOTTOM LINE:  GET YOUR SPOOKINESS HERE

Scott Snyder and Francesco Francavilla are two well established names in the comic business and for good reason.  So, seeing these two let loose and tell a clever and spooky tale is truly a joy.  A plot that is already showing complexity and ingenuity in its early stages, mixed with spot-on artwork that compliments the story perfectly makes this a sure buy for anyone who enjoys a bit of spookiness from time to time.  5 out of 5 stars.

Night of the Ghoul #1

Night of The Ghoul #1 is a superb opener to this horror series from two veteran creators. Clever writing and beautiful art add significant depth to this 50’s B-horror movie inspired tale.