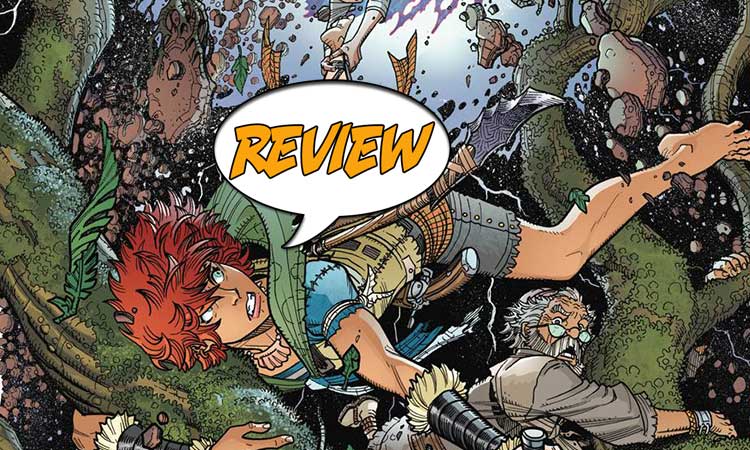 Bermuda and Bobby race to rescue Andi, only to find out that the Mers’ portal connects to Earth! Can they stop an invasion? Find out in Bermuda #4 from IDW Publishing! Previously in Bermuda: The Mers capture Bobby’s sister Andi. Bermuda realizes the full moon will be that night, and that is when the Mers will do their sacrifice. With Doc and Bobby in tow, she races across the island to where the Ocean Men live, survivors of a submarine wreck in 1982. Doc was formerly one of them, and they capture him with the intent to court martial him. Bobby asks them for help against the Mers, but they feel it is hopeless. Bermuda beats them up. They continue to race to the Mer village, and a weird storm with purple lightning begins. Bobby remembers this kind of lightning before the plane crash. The Mers don’t have access to enough power to generate this kind of storm, but what if someone from the other side was also trying to open a portal?

RUSHING TO THE CONCLUSION

Bermuda #4 opens with a prologue of the imminent future with Bermuda fighting a mutated Mer boss-monster, and things aren’t looking so good. It is exciting – but first we get to learn what is going on, and that’s actually helpful. There are a bunch of characters in this book, and a lot of plot. It has been a rollicking adventure, but it isn’t always clear just what is going on.

So, back on Earth, on a rig in the Atlantic Ocean, Bobby and Andi’s dad is with an Admiral and they are preparing to open a portal to try to find the kids. On Trangle, the Mers are also trying to open a portal. They are from another dimension, and on Trangle, their powers are weak. With a portal opening, they hope to go through and find another world. Andi is tied up as a sacrifice, and they take a little of her blood to turn one of them into a monstrous champion.

Doc thinks the monster is too tough to fight and suggests that they try to sever the link between dimensions. Or maybe retreat and just warn people. By the time he is done talking, Bermuda and Bobby are gone. In fairly short order, they cut Andi free and leap through the portal to where Bobby and Andi’s dad is. But we’re only about halfway through the issue.

Bermuda orders the men to shut the machine down. But they cannot do this without destroying it in the process. They spent billions to make it, it opened a portal, and dang it they want to see what’s on the other side. Cue the arrival of the Mers and their monster. Earth is apparently more amenable to their sorcery, so the military is no good against them. She takes her leave of them and leaps back through the portal to fight the monster. Apparently the Mers won’t be fully powered until they shed some human blood.

Bobby decides he wants to help, so he also jumps back through the portal which is where we catch up to the opening. As Bermuda is about to get her head bitten off, Bobby stabs the monster in the foot. On Earth, his father shuts down the portal. Even though the Mers are weaker again, they are only a couple teenagers. As the fighting begins again, they suddenly find allies in the fight – all the other beings we’ve met on Trangle are fed up with the Mers.

BRINGING THE ISLAND TO INCREDIBLE LIFE

The artwork in Bermuda #4 is phenomenal. The story makes some wild leaps here and there, but holding it all together is some vibrant, detailed illustration. Right on the opening page we see the Mer monster in all his muscular and toothy glory. His skin is not just scaly, it has some bumpy texture like a crocodile. He has fins, he has a tale, he has globular growths that look for all the world as though they are pulsating. He looks like he hits very hard, and the lettering sound effects support this.

Throughout the entire book, the art is expressive and full of detail. Whether it is the scene on the rig, which is full of computer equipment and military hardware, or the Mer encampment with its magical runes and distinct looks for the various Mer, what we see is a feast for the eyes. I particularly like the detail that the Mer shaman has an attachment coming up out of his back with a lit end, like an anglerfish. The action is nonstop and every inch of it is full of flavor.

Bermuda #4 is not a bad read if you don’t think too hard about it. There is a whole lot of plot, and not all of it makes sense. Bermuda is mercurial, but she is entertaining. She does overshadow other characters, especially Andi who is basically the MacGuffin. But the art it is brilliant and brings the improbable island of Trangle to life with such verve that I can forgive the weaknesses in the plot.

It’s the grand finale as Bermuda tries to save the world, or a world, from the machinations of the Mer!