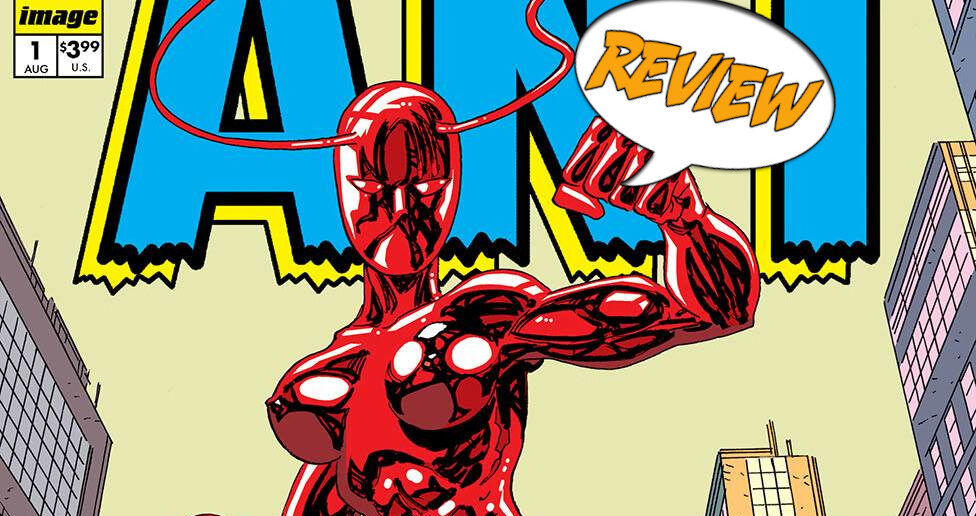 Erik Larsen brings a new ongoing title to Image Comics! Check out Ant #1 and see the origin story of this brand-new wall-crawler! You can purchase this issue via the comiXology/Amazon Affiliate link

Previously in Ant: Mario Gully created the world of Ant when he was in jail and even did his first submission while incarcerated. The title had a rocky run and ultimately Mario lost passion with the project. He sold the rights to Erik Larsen and Erik has started a brand-new run of this iconic character! Come check out the origin story of Erik’s Ant!

Ant #1 has two major plotlines going. One is about Hannah and her everyday life and the other is about her father, Daniel, and his work. Hannah is bullied by a Cassie and in one incident, Cassie threw Hannah’s doll into the street. When Hannah ran after her toy, she was hit in a terrible car accident. Elsewhere, Daniel seems to be working for a questionable man who wants “protection” from terrorists. During his research, he develops a red serum that creates an outer protective shell.

A few years pass and Hannah is beginning to recover but is still being bullied. Additionally, Daniel’s serum is ready for animal trials, but Daniel’s experiment is shut down. Elsewhere, Daniel’s partner is mysteriously murder. Daniel decides to grab Hannah and make a run for it. Unfortunately, they are suddenly attacked. Daniel is shot a couple of times and their house is set on fire luckily, he is able to administer the serum to his daughter to protect her. With the serum, Hanna is able to kill their assailant and pull her father out of the building. She leaves her father with the authorities and runs off.

During my initial read of Ant #1 I spent a good amount of time trying to figure out what makes a good origin story. Usually there is a call to action of some sort and often a tragedy. For Hannah, that call to action is to protect people because she was consistently bullied by Cassie. And as an initial concept, it worked out quite well. But I didn’t get very excited about it. I’m not captivated by the writing and the art even if there is some cool stuff going on here. Erik Larsen didn’t do anything wrong here. He told a good story with solid ideas, but I wonder if he hasn’t had the opportunity to make it his own yet. Ant is not his character. I am not familiar with the original run, but I wonder how much of this origin story is Mario and how much of this is Erik. Maybe I’ll find this more exciting when we start to get to new ideas in the comic rather than setting up old ones. But I admit that is all speculation.

Ant #1 is a solid book start but the inciting incidents didn’t hook me in. I wanted something more that could grab my attention. That doesn’t change the quality of the book though, it just wasn’t what I want out of my comics. This is a 3.5 out of 5 from me. Maybe I’ll pick up the next issue and see if my thoughts change.

Ant #1 presented a good well written story but didn't get me invested into the plot.