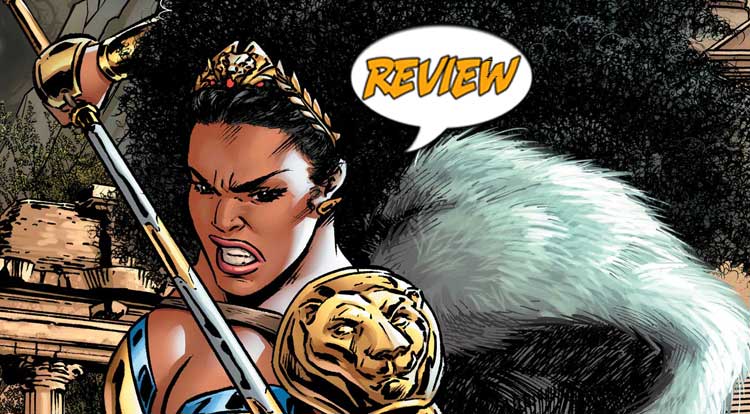 Nubia and the Amazons #1 Review

Now that she is the Queen of the Amazons, things are about to change for Nubia.  Your Major Spoilers review of Nubia and the Amazons #1 from DC Comics awaits!

NUBIA AND THE AMAZONS #1

Previously in Nubia and the Amazons:  With the unexpected arrival of new Amazons, our hero is forced to reckon with her past and forge a new path forward for her sisters.  Little does she know, a great evil grows beneath the island and it’s up to this former guardian of Doom’s Doorway to unite her tribe before paradise is lost forever!

REBORN FROM THE WELL OF SOULS

Years ago, Nubia emerged from the Well of Souls on Themyscira, followed by a cataclysmic earthquake that left the Well sealed off.  Now, with Hippolyta in the Justice League, and Wonder Woman possibly dead again, she is once again the Queen of the Amazons, and somehow, the Well has once again opened.  A new crop of Amazons has arisen, each of whom seems to be a reborn spirit, though none of them remember their lives before.  As they acclimate to life of Paradise Island, Penelope the seer is gripped by a terrible nightmare: The Well of Souls opening is an omen.  She has seen the Amazons dead, the island destroyed and the Doom Doorway opened to all the monsters beyond.  The five new Amazons are somehow part of the problem, and Nubia’s reign may be how it all begins.

A LOT OF SETUP

As a general rule, I’m a fan of DC’s no-continuity approach to storytelling, but this issue shows the difficulties with that.  I’ve only been reading Justice League, where the events that led to Diana’s demise have only been obliquely referenced, so I walked into this issue blind to find a story hinging on things that had come before.  The introduction of the Well of Souls as a way to get new Amazons (and, importantly, Amazons of different origin, rather than the usual blonde women) is an interesting wrinkle, but Nubia isn’t really the center of attention in her first issue.  I do like the art quite a bit, with Ayala’s pencils reminding me a little bit of Chriscross, specifically his Milestone work of the ’90s.  The difference between the covers of the issues and the interiors is noticeable, however, which might lead to some reader disappointment.

All told, Nubia and The Amazons #1 is a good issue, though not necessarily the best introductory issue, featuring a number of new characters and premises to change the Themyscira we know into something new and hopefully long-lasting, with above-average art and a central mystery that should bring readers back next issue, earning a better-than-average 3 out of 5 stars overall.  I’m absolutely willing to give this book six issues based on the strength of this first tale.

NUBIA AND THE AMAZONS #1

This doesn't really read like a first issue, but it's well-drawn and the mysteries introduced are compelling. I just wish there were more context actually provided in the issue.