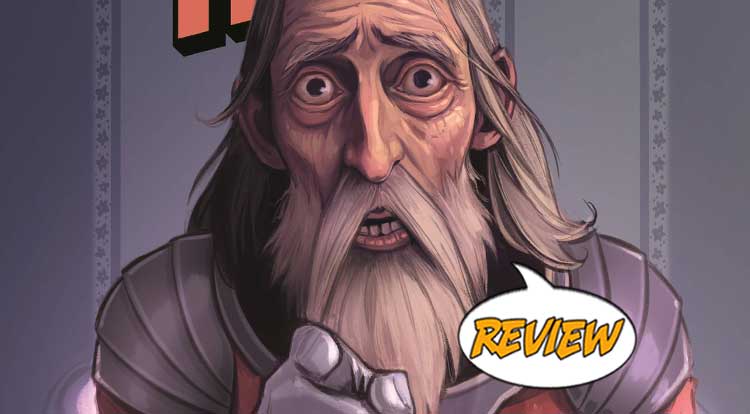 The end of the universe is shocking, but not compared to the end of this comic.  Your Major Spoilers review of Black Hammer Reborn #4 from Dark Horse Comics awaits! Previously in Black Hammer Reborn:  Twenty years ago, Lucy Weber fought Spiral City’s greatest villains as the heroic Black Hammer.  Today she finds her marriage falling apart and her children in danger with new threats wreaking havoc on her world and some of Black Hammer’s greatest heroes returning to aid her in saving it from destruction.

THE RETURN OF THE ANTI-GOD

Fade In: The Weber home, an hour before the end of the world. Lucy Weber is shocked that Colonel Weird has come to find her, but she’s even more angry when he suddenly manifests her black hammer and teleports her into the Para-Zone.  Due to the strange nature of reality there, she relives a battle from 20 years earlier, a battle with Doctor Andromeda that contains important information, but then she also revisits the birth of her son… and her daughter’s first experience with drugs… and her son torturing small animals…  and her husband cheating on her.  It’s all horrifying, but Weird insists that Lucy has to remember it all, to remember that her family isn’t perfect, but they’re her family.  She then revisits the moment where she killed Andromeda (to his immense shock) and chose to end her heroic career the first time.  That’s when they return home…

And Colonel Weird draws his gun.

Black Hammer Reborn #4’s  time-jumping takes a little bit to process, but by the time we get to the final moments of the issue, and Weird’s satisfaction that Black Hammer is really back, full time, it all comes together in a big ball of horror.  There’s even the issue’s most frightening exchange, where Lucy promises to kill Colonel Weird for what he does, only for him to respond, “Not yet.”  Caitlyn Yarsky’s art is the star of the show this time around, especially in the Para-Zone, but I’m impressed as her ability to combine the mundane with the insane.  The shots of Lucy and her family’s life are emotionally arresting (especially her out of shape husband’s infidelity, shown in detail) but the moment where she powers up and smashes the villain wouldn’t be out of place in any Legion of Super-Heroes or X-Men book.  Best of all, her characters have a huge range of emotions, even when masked, and her Colonel Weird always looks like a haunted wax sculpture of Vincent Price left out in the elements for too long.

BOTTOM LINE: WHERE DO THEY GO FROM HERE?

Whatever I expected from the first three issues has been shattered by the closing scene, making Black Hammer Reborn #4 one of the most unexpected comics of the week, which combined with strong art that perfectly illustrates the terrible events of the issue, ending with a bang and 3.5 out of 5 stars overall.  There’s a whole new status quo coming out of this issue, and I’m both excited and sad for everyone involved.

The lengths to which Colonel Weird is willing to go to recruit Lucy are nothing compared to the lengths he goes to AFTER recruiting her... This issue is a shocker.