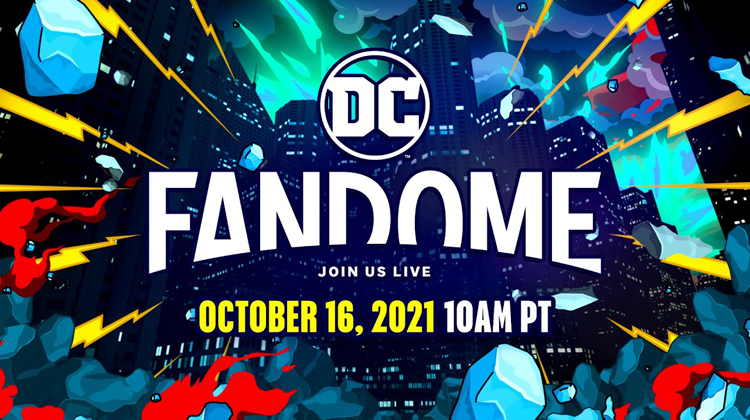 DC Fandome returned this past weekend, and it wasn’t quite the show it was in 2020.

This was the second year of this event, and I’m frankly not sure we’ll see it again.

DC Fandome focused largely on the DC TV and movies as well as the games spawned from DC’s comics properties. They had hosts from around the world, including the UK, Australia, and Brazil, just to name a few. It had it’s very own musical score from Blake Neely, who provides music for a lot of The CW’s DC superhero shows such as The Flash, Arrow, and DC’s Legends of Tomorrow.

There were some big announcements during the event, including the announcement of additional seasons for Titans and Doom Patrol on HBO Max and promos for upcoming seasons of Young Justice: Phantoms and Pennyworth, which is also moving to HBO Max.

We also found out that Barry Allen will be wearing yellow boots in the upcoming season of The CW’s The Flash and got a look at Peacemaker’s show on HBO Max.

As the show progressed, news came out the upcoming Catwoman: Hunted animated film, The Sandman’s casting of Lucifer, and The Milestone Initiative.

Most news briefs were presented by Candice Patton, who plays Iris Allen on The Flash. She occasionally would interview someone, but mostly she was giving updates about various DC properties.

We saw glimpses of some DC comics heroes like Batwing from the Batwoman show and other characters. DC also talked about new working with Ally and other companies to help promote new and diverse creators.

I enjoyed interviews with Scott Snyder and Jim Lee, among others. There was also a farewell to Supergirl featuring almost all of the cast members looking back at the series.

I thought the preview of the Injustice animated file was particularly strong. Although I’ve never played the video game, I did read the comics, and they were engrossing, so I’m seriously looking forward to that when it is released.

Naturally, Batman got a LOT of attention! My two favorite parts were Bruce Timm and his colleagues interviewed about the upcoming Batman: Caped Crusader animated show and the folks behind The Batman live-action movie. I guess it says something that the t-shirt I bought was from the animated show!

It ran until about 1:40 p.m., then wrapped up and ran “thank you” in multiple languages endlessly after that. The end kind of felt that it happened unexpectedly, and it took place at an odd time—not on the hour, as many shows like to do. I was surprised, honestly. The good news is that now you can just click on it, and the entire event runs again. Better!

IT WASN’T WHAT IT WAS LAST YEAR[/su_heading] I’m not sure if there were some folks who wanted things to run a lot more tightly than in 2020.

Missing from DC Fandome this time was a half-hour CNN special recognizing people who made their communities better places (or something close to that). I was happy that didn’t return, though.

Then, too, last time, the event took six hours and repeated three times after that initial running. Not this year. It was once and out.

The only times the comics were mentioned was when they influenced a multimedia project like a video game or a TV show. They did a “DC Spotlight” on Blue Beetle, for instance, to explain who the character was.

A lot of the interviewing and other things were done by stars and others under contract with the shows. For instance, Melissa Benoist largely ran the Supergirl farewell.

Look, I appreciate that DC wants to use the Internet to promote their video properties, be they on The CW, HBO Max, or go directly to DVD or other disc.

DC obviously wants to get better known for their films and programs. Hey, they likely make more in an animated film than they do in their comics. But it felt like comics, which is where they got their start, got really shorted in all this. Again.

I suggest that they do a “DC Comics Fandome” sometime, and have it focus on the books (shocking idea)!

They could do a lot of promotion of their comics. Yes, they did mention that Superman’s son is now bisexual in an offhanded manner since it hit the press before this event. But I would have liked to see Tom Taylor get interviewed about that, including why they did that. And I also think Phillip Kennedy Johnson should have been on the show to talk about the War World event on the way in the Superman comics.

I could list a LOT of comics that deserved attention in this event, but I realize there’s a problem in doing this. Media shows are planned literally months or even years in advance. Comics creators, on the other hand, keep a lot of the details of their upcoming storylines close to the vest, so it may make a “Fandome” difficult to time in advance. You could interview creators and give us looks at the art as it is being developed, when it comes to the visual aspects.

But it could be done!

I seriously doubt that we’ll see another Fandome. They used a lot of the effects and sets from the previous year, and I don’t think it was the big media deal that last year was. But we’ll have to stay tuned to see!

What do you think? Do media events like DC Fandome promote the comics? Or are they mostly drawing attention to the TV shows and movies? Should they do a DC Comics Fandome instead? Whatever your opinion, be sure to share it in the space below!