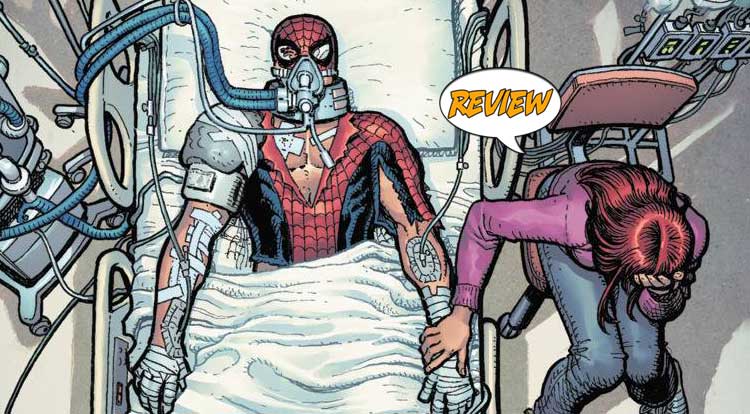 The unthinkable has happened…  Your Major Spoilers review of Amazing Spider-Man #76 from Marvel Comics awaits!

Previously in Amazing Spider-Man:  Peter Parker was reminded that he’s not the ONLY one with spider-powers, when Ben Reilly arrived, wearing his own Spider-Man uniform.  Ben has signed on with the mysterious Beyond Corporation, who now have the rights to Spidey’s name and likeness, but when both Spider-Men confronted the U-Foes, Ben’s high-tech suit gave him protection from their cosmic-ray induced powers.

After last issue’s battle with the U-Foes, Ben Reilly brought his badly wounded “brother” Peter to the emergency room, then faked a call to Aunt May, claiming to be Peter.  By the time she and Mary Jane arrive at the hospital, Ben has headed out for the Beyond Corp. headquarters where he is contractually obligated to rest and upgrade his weapons before tracking down the U-Foes again, but a troubled Ben insists that he has something to take care of first.  While May Parker terrorizes the hospital staff, Ben returns to apologize to Peter and Mary Jane, officially asking for Peter’s permission to be the official, licensed Spider-Man for Beyond.  Peter assures him that it’s okay, especially since he’s probably going to be out of action for a bit, and Ben leaves satisfied to tackle the errant villains.

Amazing Spider-Man #76 features a good old-fashioned passing the torch moment that works really well, but it’s in the middle of a story whose machinations are working a little TOO hard to put Peter out of action to clear the decks for Ben’s run.  I appreciate the way the U-Foes are treated as extremely dangerous foes, in that it makes sense, but it comes at a point where they’ve been seen as joke characters and bit players for a long time.  I could say the same about Ben’s return to prominence with the Beyond Corp., in that it feels like an interesting development, but one that makes Peter look like an idiot for not taking care of the Parker Industries situation and making sure that his likeness was still his own.  As far as the art goes, there are some lovely shots in this issue, including an appearance by Misty Knight and Colleen Wing as Spider-Man’s new street team associates, and a big splash of Aunt May that’s wonderful, but Gleason’s art is strangely indistinct when depicting a Spider-Man in action.

BOTTOM LINE: I CAN GIVE IT A CHANCE

If you combine that oddly sketchy art with the complex new Spider-Man costume, it makes for some panels that just don’t read right, but overall Amazing Spider-Man #76 works for me, with an interesting series of premise changes and some lovely character moments to get me past the things that trouble me, and a final page that is both exciting and daunting, earning a better-than-average 3 out of 5 stars overall.  If nothing else, Ben Reilly fans who’ve always said their guy didn’t get a fair shot can finally see him get his due, and that’s going to make for good drama.

This issue excels in its character moments, from the Ben/Peter interaction to May dressing down the doctors to the Beyond Spider-support team, but the art is a little bit sketchy and lacking in detail for my tastes. Even so, it's a interesting change in the status quo.