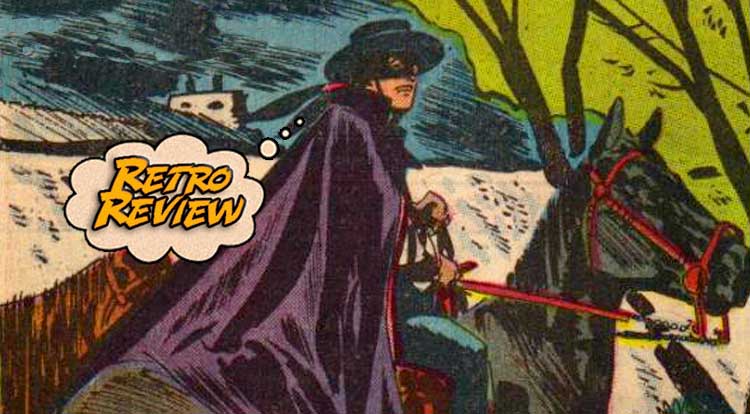 Out of the night, when the full moon is bright, comes a horseman known as Zorro!  Your Major Spoilers (Retro) Review of Four Color Comics #882 awaits! Previously in Four Color Comics:  Premiering in the fall of 1957, Zorro quickly caught on the the youth of the fifties, making star Guy Williams (née Armando Catalano, an Italian man playing a Spanish/Mexican hero, because 1957) a household name.  Unusually for the era, Zorro was structured like a movie serial, with ongoing story arcs showing how Don Diego de la Vega became a cloaked rider of the night and began his war on corruption in colonial California.  It begins on a passenger ship from Spain, where Señor de la Vega is engaging in a workout with his trusty rapier, while most of the passengers watch, enthralled.  One of them tells him of the conditions in Los Angeles, leading him to formulate a plan with his manservant, Bernardo. “When you cannot clothe yourself in a lion’s skin,” he decides, “put on that of a fox!”  Diego decides to invent the secret identity (with apologies to Baroness Orczy) and live a double-life in the hopes of overthrowing the dictatorship that his home has become.  Playing the foppish nobleman to the hilt, while Bernardo feigns being deaf and dumb, Diego is able to assess the situation and gauge the occupying force of Capitan Monastario.  He even fakes his spineless rich idiot routine with his own father, to better support his role as a fox.  But he’ll need more than just a faithful manservant: He’ll need a horse. Not for nothing is Alex Toth known as a master of light and shadow, and his adjustments to the script and dialogue of the first installment of Zorro do make things flow better.  Of course, those same changes to the source material would get Alex in hot water with his editor, which eventually led to his removal from the project.  Still, this issue is beautifully drawn, and when El Zorro makes his first appearance to save one Señor Torres from execution, it’s like poetry. Zorro frees Torres, and when the forces of the evil Comandante try to follow, they find their saddles sabotaged.  Having succeeded in getting the attention of the authorities, a manhunt begins for the mysterious masked man.  Since he’s a new arrival, Don Diego could be considered a prime suspect, but he’s prepared.  Using a hidden passage in his father’s manor house, he creates his own Fortress of Zorritude and/or Foxcave, so that when the Comandante comes calling, looking for Zorro, there is no evidence of his activities.  Of course, they’re not looking for him, but instead one of his vaqueros, a man named Benito Avila.  On the other hand, it provides a perfect opening for El Zorro to make his appearance. Zorro outwits and outfences the corrupt policeman, making a daring escape across a dangerous chasm that the pursuing horses can’t handle, thanks to Tornado.  The Comandante and his forces return home with their tails between their legs, just in time for Zorro to get in a good ol’ fashioned Superman wink to the readers. What’s remarkable is that Toth’s pencils don’t look like Guy Williams, but are somehow still a perfect representation of him as Disney’s Zorro.  I consider myself something of a Dell Comics’ aficionado, which means that their strengths (a vast array of licensed titles, excellent artists and a knack for boiling down adaptations to their essentials) and their weaknesses (their numbering scheme is a nightmare and the assembly line process means that consistency is valued over quality) are sometimes out of balance.  But Dell Four Color #882 (which also serves as Zorro #1 in Western’s bizarre numbering scheme) was a really good book in 1958 and remains so today, earning 4 out of 5 stars overall.

This issue was recently reprinted by American Mythology Productions, if you don’t have 9 grand just lying around unspent.

It's a well-paced, beautifully drawn issue that shows off some of the best of Dell Comics, and even with the weirdly garish coloring, it's a very solid comic book read.