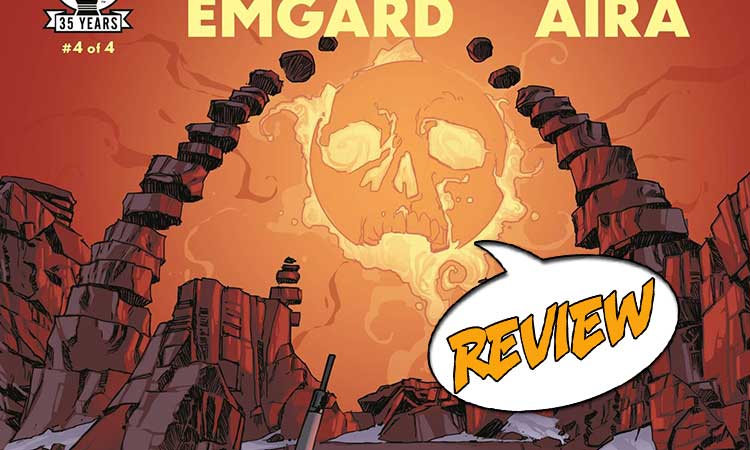 As monsters take over the Antarctic base and Ben searches for Katherine, she is pulled through to an alien world. What is Die Glocke trying to do, and who is behind it? Find out in The Secret Land #4 from Dark Horse Comics!

Previously in The Secret Land: The mysterious device called Die Glocke is working, and madness runs rampant at the Antarctic base! At an all-staff meeting designed to ferret out a traitor, bloody monsters erupt from the walls. Katherine realizes that Julia must be Soviet, and the arriving fleet may be theirs. After an encounter with a monster, the two women become tentative allies. While German planes approach the fleet, Ben and a small group of men sneak into the base and run the monsters and Hesse, who insists the reactor must be shut down. He is also worried about his assistant, who Ben realizes must be Kat! Kat and Julia reach the reactor room first. Julia provides cover for Kat, but instead of turning off the reactor, she is drawn through a portal!

A TWISTED KIND OF CHAOS

The Secret Land #4 opens with Hess leading Ben toward the reactor, when they run into Kunst who accuses the professor of being a spy and shoots him. Ben voices a thought which ironically applies to us – “Ben has given up trying to make sense of the situation.” We don’t understand the particulars, but that is the point. The situation on the base is pure chaos and destruction. Against this backdrop, Ben’s point of clarity is finding Katherine.

Katherine awakens in another place entirely. Some sort of large arthropod approaches her, and she is filled with hate and rage, yet resists giving in to those emotions. As she kills the creature, she feels sorry for it. And she hears distant bells. A weird, vaguely humanoid, creature approaches, fascinated. This is not the outcome it expected, and it attributes this to the love she carries with her, something which is an abomination in this realm.

It insists that they are the inadvertent creations of humans. It is as though an allegorical conflict between love and hatred has manifested as an actual conflict between two spheres on different dimensions which now are connecting, and this realm is preparing to invade.

On the base, the battle rages on. Ben and Hesse reach the reactor room which is almost unrecognizable now as it seems to be taking on aspects of being a living organism and not a machine. Ben asks about Katherine, and Hesse, astonished, asks how he knows her.

On the alien world, the creature exults. Hesse, as we suspected, loves Katherine as much and as purely as she loves Ben. Not only did she reject his advances, but now he understands why, and this will allow the creature to reach into our world, through the mind of Hesse! It makes the mistake of mentioning Katherine’s betrothed, and she realizes that Ben must be there. Her love burns brightly, and she uses the strength of it to grab her seashell, hold onto her thoughts of love, and stab the creature. She has risked all so that at least Ben might survive.

As Ben fights Hesse, he too is consumed with rage and the desire to kill right up unto the point that Hesse reverts to himself. Ben is overcome with grief, doubt about himself. He and his men gather themselves up and prepare to blow up the reactor. At the same time Katherine, who felt all the love drain out of her as she attacked, gets the idea to throw herself through the portal.

The reactor is gone. The force that made it possible to live on the base, that helped the Nazis develop their high-tech equipment, is finally gone. The cold seeps back. Snow and ice will soon bury the dead. A few people survive. Ben and Katherine are among them – but changed by the experience.

A STRANGE AND DIFFERENT LAND

The art of The Secret Land #4 is phenomenal. The other world has connected with our world and is growing through it. Nearly every scene has these touches of pulsing organicity using its tendrils to crack apart the foundations of science. And on the alien world, the small creature Katherine kills has viscera that resemble what we see attacking the base. The main creature itself, while humanoid, has a lumpy, fleshy body that is reflected in the structures taking over the reactor room. There are background patterns on the rocks, in the smoky air, in the cracked support towers, that call each other to mind. Despite all the chaos, the connections between the two worlds are made clear.

It’s interesting to have a book where the love story at its heart is played out with the two lovers at such great distance from each other. Except at the beginning of the first issue and the last pages of this one, not only are they not together they don’t even know where the other is or if they are even alive. A desperate hope is what keeps each of them going. We have seen it all along, but it is shown even more intensely here.

The Secret Land #4 is dramatic and at times even melancholy. I am fascinated by the juxtaposition of the horror story that personifies human hatred into living beings against a love story where love can be powerful yet, at the same time, as fragile as a seashell.

Die Glocke has opened a portal between our world – and what other world?