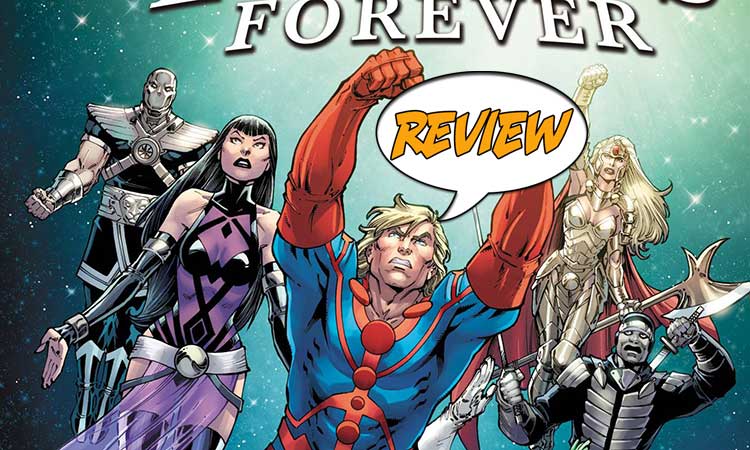 The Eternals are once again in danger from the sinister Deviants, but this time one of their own is helping, and they don’t even know it.  Your Major Spoilers review of Eternals Forever #1, awaits!

Previously in Eternals Forever: The Deviants have captured Ikaris and it’s up to Gilgamesh and Sprite to stop him and prevent all-out war between the Eternals and the Deviants.

IKARIS, AGENT OF THE DEVIANTS

Eternals Forever #1 opens with Ikaris enjoying his day, flying through the air.  He’s then ambushed by a Deviant ship which manages to net him just before he destroys it. With the Eternal in their possession The Deviants return to their underwater headquarters and deliver their captor to their leader, Lord Ghaur.  He explains that his plan is to plant a tracker in Ikaris so he can lead them to The Eternals home Olympia.  Ikaris manages to escape and heads back home.  He’s first noticed by Sprite who notes that something seems wrong with Ikaris’ mind.  Afterward, Ikaris visits his son’s grave and recounts the story of how he passed.  He’s joined by Gilgamesh, the two have a brief conversation before heading to Olympia. There we see brief scenes of the other Eternals before things go back to The Deviants where Lord Ghaur speaks to his troops telling them their origin. They then launch their attack on The Eternals. Things are not going well for The Eternals until Ikaris and Gilgamesh summon the Uni-Mind.

A CLUNKY ATTEMPT AT AN HOMAGE

The thing that becomes apparent with almost the first writing in Eternals Forever #1 is that they’re trying to evoke an old-school 1970s motif, while also trying to provide an in-story introduction to The Eternals.  Everyone speaks very dramatically with over-the-top metaphors and overly descriptive sentences.  That isn’t to say that there isn’t a place for that kind of writing and that it can’t be done well, but here it acts more as a reminder why comics aren’t written this way anymore. All the interactions between the characters takes on double duty of trying to push the story along, but also describing the history of each character.  This just leads to all the conversations being awkward.  For example, at one point when Ikaris meets with Gilgamesh, the fact that Gilgamesh was exiled at some point is shoe-horned into an otherwise normal conversation. The whole issue has moments like these, which make a good portion of this issue come off as nonsensical and even parody-like in spots

A BETTER ATTEMPT AT AN HOMAGE

The art, also sticks with this attempt at echoing comics from the era that The Eternals were created, thankfully this is far more successful.  While the art isn’t exactly a copy of Jack Kirby, there’s enough little things here and there that bring out that feeling; the bright colors, dynamic action scenes, and just a touch of surrealism all come together to give this a look that makes this look vintage, but unique.

BOTTOM LINE: TOO AWKWARD FOR ITS OWN GOOD

Eternals Forever #1 tries to introduce The Eternals while also being an homage to the original comics of the 70s and while the art of this issue manages to do this, awkward dialog and a pretty bare bones plot makes it a challenge to find further interest in these characters.  2.5 out of 5 stars.

Eternals Forever #1 is continuously bogged down by awkward dialog that tries to force backstory into every interaction, ultimately making the characters and story, unlikeable.