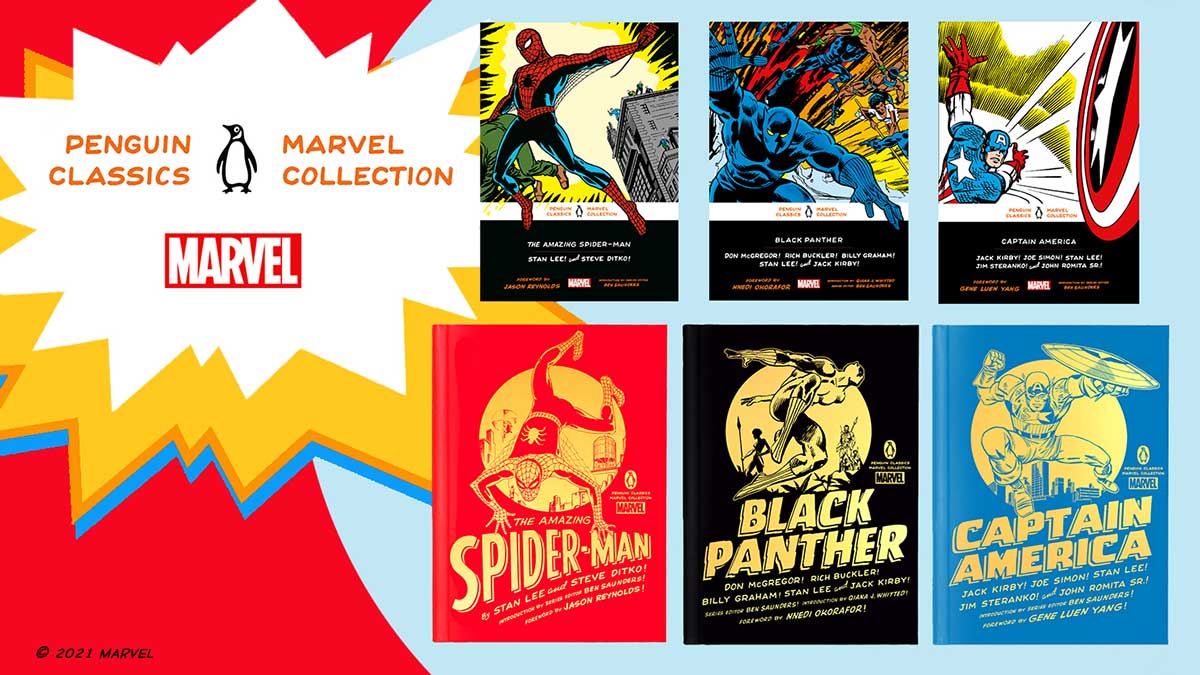 Penguin Classics has announced it is working with Marvel Comics to publish Penguin Classics Marvel Collection, a curated collection of stories featuring Black Panther, Captain America, and The Amazing Spider-Man. Each title will be published in black spine paperback as well as a collectible hardcover edition with beautiful gold foil stamping, gold top stain edges and endpapers featuring artwork from the comics. They each include a foreword by a contemporary young adult author and a detailed scholarly introduction, speaking to the enduring significance of Marvel’s iconic creations.

The Amazing Spider-Man includes a foreword by Jason Reynolds, the award-winning and #1 New York Times bestselling author of many books including Miles Morales: Spider-Man, Look Both Ways and Stamped: Racism, Antiracism and You. Reynolds is the 2020-2021 National Ambassador for Young People’s Literature.

Black Panther includes a foreword by Nnedi Okorafor, the multiple award-winning author of Who Fears Death and the Binti novella trilogy. She has written Black Panther and Wakanda Forever for Marvel Comics.

Captain America includes a foreword by Gene Luen Yang, the fifth National Ambassador for Young People’s Literature, and the author of Shang Chi for Marvel Comics and American Born Chinese.

Ben Saunders, editor of the series, said in a press release, “The comics produced at Marvel in the 1960s can be compared to the most enduring popular music of that same tumultuous decade. Working at tremendous speed in what was widely regarded as a low-status commercial medium, the creators at Marvel initiated and participated in an aesthetic revolution. These comics have now influenced writers and artists across all forms of media — from contemporary novelists to hip hop musicians to Hollywood filmmakers. It is not hyperbole but simply a fact: these classic Marvel Comics are foundational documents of our culture.”

The Penguin Classics Marvel Collection kicks off on June 14, 2022.