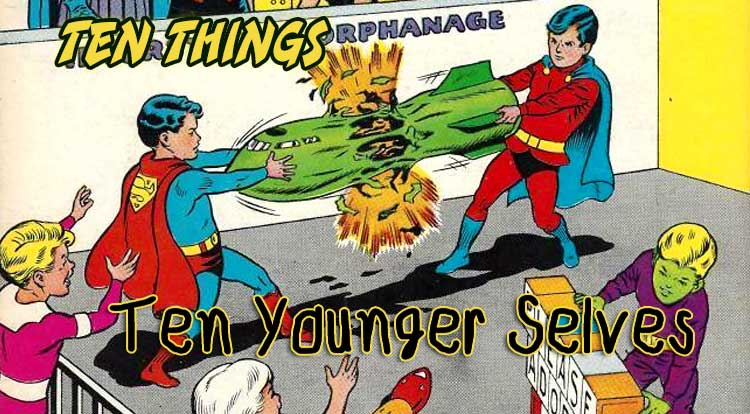 *Rocking on the porch, wearing an eyepatch and old age makeup*  Y’know, this reminds me of when I was a young hero…   Welcome to Ten Things: Ten Younger Selves!

Whooshman-Bicarbonate Films, in conjunction with An Amateur Comics Historian and The Estate of Jerome Siegel, Presents:

Though he’s not the first Kid Supreme (there were two before him, one of whom was clearly based on 1993 clone Superboy), the teenage version of Ethan Crane is the most successful, mostly because he knocks off the original article.  Not only is a teen version of the hero, like Superboy, he joined a time-twisting group of teenage heroes (The League of Infinity, as opposed to the Legion of Super-Heroes) and faced a villain whose powers were based on the element that is his weakness (Master Meteor, as opposed to the Kryptonite Kid.)  Part of Alan Moore’s successful revamp that made Supreme an archetypical celebration of the Silver Age, Kid Supreme will forever live in the past of “twenty years ago.” A fave-rave of Major Spoilers Editor-In-Chief Stephen, the tales of Young Indy filled in a number of blanks to explain how a mild-mannered history teacher became a swashbuckling archaeologist and ad hoc superhero.  (Though Jeff Rovin maintains that Indiana Jones cannot be classified as a superhero due to being “a boor who depends more on luck than talent,” I disagree, placing him in the same realm as Doc Savage, The Shadow and G-8 as pulp-style proto-superheroes.)  93-year-old Doctor Jones narrating the story of how his eight and sixteen-year-old selves got into trouble makes for good times, and if you pay close attention, Harrison Ford shows up at least once as an older Indy as well. Steve Austin, Astronaut.  Jamie Sommers, professional athlete.  Thanks to the bionics research of Dr. Rudy Wells, each received a new lease on life after a potentially fatal accident, implanted with mechanical parts to replace arms, legs, ears and eyes destroyed by trauma.

Who better to star in school-age adventures at spy-school in a Harry Potter homage?  Heck, they’ve even got Bigfoot to play Hagrid for them!  My question is this: Will they need new bionics as they grow up? A favorite comic of Milhouse Van Houten, Watchmen Babies is a pretty brilliant bit of satire at the expense of DC Comics, who famously made it impossible for Moore to ever regain the rights to his co-creations after making it part of his initial contract.

Honestly, though, it’s got to be more entertaining than Doomsday Clock. Though she’s currently the third hero to wear the mantle of Eclipse, two-fisted avenger of the night, Yuko Nakatomi was once the sidekick of the second.  Moonstone was also a member of Teenpeace, a group of like-minded youngsters and sidekicks who worked together to fight crime on their own terms.  As with nearly every member of the cast of Edison Rex, Yuko is an homage to an existing hero; in her case, it’s Dick Grayson, once Robin The Boy Wonder, grown up to become Batman himself.

And, just like nearly everyone else in the case of Edison Rex, her codenames are the names of defunct comics publishers. In the pre-Crisis continuity of Earth-124, Queen Hippolyta grew nostalgic for her daughter’s younger years, using Amazon technology to bring two younger versions of Diana into the future to meet her older self.  Wonder Girl and Wonder Tot adventured with Wonder Woman several times during the era before being set aside for more grounded storytelling after Bob Kanigher exited the book.  Infamously, the existence of Diana’s younger self actually created a decades-long continuity snafu, as writer Bob Haney added Wonder Girl to the cast of Teen Titans without realizing that she wasn’t a separate sidekick hero, setting off a series of cascading retcons to explain how in the blue heck that ever happened. While Clark Kent was a camp counselor, he foolishly brought along a strange power crystal that he obtained in the 30th Century, because reasons.  After telling ghost stories, he and Pete Ross try to scare their young charges, only to have one of them transform into a superhero and fight him, forcing him to try and hold off Mighty Girl while not revealing his own identity as Superboy.  Once he realizes the crystal is to blame, he hucks it into the sun, negating Mighty Girl’s powers, and she remarks how she really wants to be a superhero like him when she grows up.

And that little girl’s name was… Barbara Gordon.  And now, you know…  The Rest Of The Story! Originally popping up in the fifties, Little Archie was a pretty blatant attempt by Archie Comics to use their popular characters to corner the elementary school market the way they had teen books, and it was quite successful, lasting for almost thirty years!  Not long after Archie gained super-powers in 1965 (thanks to one of the periodic resurgences of superheroes in the cultural zeitgeist), Little Archie also gained the ability to transform himself into a caped form.  Unlike Pureheart, who held down his own solo comic for a few issues, Little Pureheart made only three appearances before disappearing. Another anomaly of the pre-Crisis Superboy universe, Aquaman encountered an old man who reminded him of a time in his youth when he adventured as the teenage King of Atlantis.  In one subsequent adventure, he met and teamed up with the Boy of Steel, fighting the menace of pollution and apparently failing miserably, because their adult selves’ world is far more polluted than ever.  I can’t find a clear answer to how many times Aquaboy appeared, but I can only specifically identify two stories featuring the teenage fish-man.

Aquaboy should not be confused with adult Aquaman’s sidekick, Aqualad, or his son, Aquababy (RIP). Okay, stop me if you’ve heard this one: While under the influence of Kang The Conqueror, the Tony Stark of Earth-616 became a slavering, murderous jerkface and nearly destroyed The Avengers from within.  To combat him, the team used time-travel to pull a younger Stark, uncorrupted by Kang’s influence, from the past, leading to and Iron Man vs. Iron Man fight and the seemingly demise of grown Tony.  The younger Stark (who was retconned to be from the alternate reality of Earth-96020) suffered a heart injury that forced him to constantly wear a chest plate to regulate his cardiac operations, then tried to build a life in the strange future world in which he found himself.

Young Tony’s career was short-lived, as The Avengers were soon after attacked and seemingly destroyed by Onslaught, surviving only because of the latent reality-warping powers of Franklin Richards, who was more familiar with the grown-up Stark and somehow merged them into one being.

Once again, this week’s topic, Ten Younger Selves is all me, but feel free to follow along @MightyKingCobra to suggest your own!  There’s always more Ten Things madness on my Twitter or check out the full Twitter archive here!  As with any set of like items, these aren’t meant to be hard and fast or absolutely complete, if only because everything’s funnier with “L’il” added in.  Either way, the comments section is below for just such an emergency, but, as always: Please, no wagering!