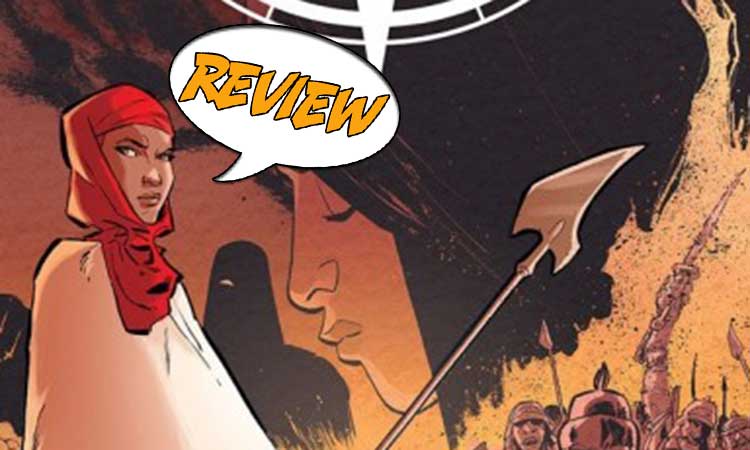 As Shahi realizes the power of the Cauldron, it falls into the hands of Margul Khan! Will Ling side with her fellow scholar or betray her? Find out in Compass: The Cauldron of Eternal Life #5 from Image Comics!

COMPASS: THE CAULDRON OF ETERNAL LIFE #5

Previously in Compass: The Cauldron of Eternal Life: Shahidah and Ling are deep within the Barrow of Annwn, suspended from a stone outcropping on opposite ends of the same rope. Working together the former friends, now rivals, work to twist the rope around itself so they can climb up and escape. Below them, and ancient cave bear growls. In the meantime, Ednyfed battles against the forces of Margul Khan, who has come here looking for eternal life. Shahi is blind, at least for now, and Ling has an injured arm. They decide to work together to try to find the Cauldron and try to keep it out of the Khan’s hands. They confront the guardian of the Cauldron – a dinosaur who is still alive! – and manage to stun it. The water in the pool around the Cauldron heals Shahi’s sight and Ling’s arm, and they daringly decide to try to float the Cauldron out of the Barrow.

INTO THE HANDS OF THE KHAN

While we saw last issue that the floating plan worked to get the Cauldron out, it also landed the women in front of Margul Khan, who claimed it. As Compass: The Cauldron of Eternal Life #5 opens, the Khan is about to be reborn, an event witnessed not only by his own men, but also by the Welsh and a captive Shahidah. He steps out of the Cauldron young, strong, and whole. He demands loyalty of his followers and does not hesitate to kill anyone who is less than absolute in their faithfulness to him.

Shahi is taken to Ling’s tent where, to her surprise, the Chinese scholar quickly frees her and provides her a bag of supplies, rations, notes, and money so she can escape and warn the House of Wisdom. But before she can get away, the Khan arrives. The Mongol custom is to travel light and to kill prisoners. Ling accepts her betrayal of him and prepares to go to her death fearlessly, but the Khan has other plans. He has heard of other wonders, and he wants to use the scholars to take him there – both of them.

One thing leads to another, and after the captive Ednyfed defies him, the Khan agrees to take him on in single combat. This is terrifying in its own right, but we shortly learn that the power of the Cauldron has indeed extended to him. He is not afraid to face pain, but now he cannot be wounded. The Druids arrive and their arrows also cannot hurt him. He mocks them for not taking advantage of the treasure that lay under their feet for so many years.

But Ling and Shahi realize that the Dragon they saw is much, much older than the finely worked Cauldron. Is the power from the Cauldron after all, or does it have some older, deeper source? Does the Khan have a vulnerability? Do the Druids understand the extent of the power? Suffice it to say, these questions are answered, and the story draws to a most satisfying conclusion.

The art of Compass: The Cauldron of Eternal Life #5 keeps pace with the plot. It is dramatic to see the Khan emerge from the Cauldron as a man in his prime. As a wizened and dying old man he was still terrifying by the way he commanded the men around him. To see him regaining his youth and his strength, while still holding onto the arrogance of his age and experience, he is formidable. We see him revel in his strength, not only of body but also of mind as he outwits Ling. He comes across as utterly comfortable in his power and utterly certain that he is invincible.

The scene of his single combat with Ednyfed reinforces this. I like it as an excuse for an action scene, but it also serves to show us what the power of the Cauldron is. Ednyfed stabs Margul, and the Khan is momentarily startled before he realizes that his wound is healing. When he strikes back, he hits like a juggernaut. When the Druids join the fight, the battle escalates into chaos as the Khan’s men also join in. If I have any criticism, it is that there are occasional angles where people’s faces appear flattened. It is not often, but some angles just seem to be awkward.

Compass: The Cauldron of Eternal Life #5 is a terrific end to a thrilling story. The plot has been put together carefully with all the pieces set in place so they finally connect here. I have loved the entire concept so much and I think it would be really fun if some day, there is another tale of Shahi’s adventures.

Which is stronger, the loyalty of friendship, or loyalty bought with threats?