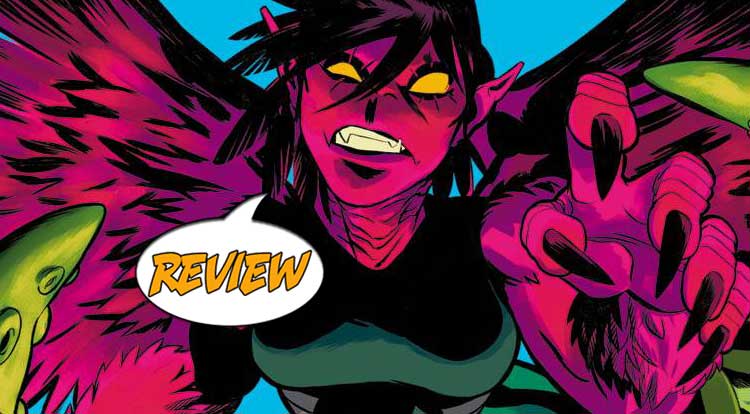 There have been seven versions of reality before this one.  And if the Defenders fail, the Eighth Cosmos will go the way of the first seven…  Your Major Spoilers review of Defenders #3 from Marvel Comics awaits!

Previously in Defenders:  Doctor Strange and his misfit crew land in a world of dark, primal magic – where our world’s master of the mystic arts is just a magical morsel for countless hungry sorcerers.  The most powerful entity on this plane, the maker of magic itself, already knows the Defenders and their mission.  Their paltry abilities mean nothing to him, save one: The power to move between cosmos.  All of existence lies vulnerable as the Defenders find themselves outmatched!

After battling Omnimax in in the Sixth Cosmos and meeting Taaia, the mother of  the child who would become Galactus, The Defenders have been thrown back to a previous iteration of reality, minus The Silver Surfer.  Sadly, Taaia’s escape craft doesn’t work in the Fifth Cosmos, nor does any of their technology, and Doctor Strange’s magics threaten to overwhelm him, leaving it to The Harpy to save their lives.  Something about her strange post-death Hulky nature makes her even more powerful in this reality, and the five Defenders are saved… only to be thrown into battle with Mor-I-Dun, this reality’s future Devourer and active Sorcerer Supreme.  He makes one mistake, though, as he explains the nature of magic, built as it is on cups, blades, staves, circles, and the secret flame that empowers them all, allowing Strange to realize the truth about his team and their archetypical makeup.  Then, things get weird…

THE COLORS ARE PART OF THE STORY

Strange realizes that the five Defenders represent “the colors of reality”, in this case the CMYK printing colors (plus the white of the paper) that define their comic book reality, and their battle is a meta-textual deconstruction of their printed reality, which ends when they are thrown back into the Fourth Cosmos (with accompanying shift to four-colors), landing face-to-face with its Hulk.  Ewing has been playing with the concepts in this series since before Secret Wars, dating back to the days of The Ultimates, but visiting these realities has been the kind of thrill-ride that modern comics don’t deliver anymore.  Taaia is especially wonderful, speaking like a living incarnation of Jack Kirby’s bombastic dialogue (including “random parentheses,” something the King was known for), but all the characters have been truly incredible to read about.  Betty Ross reminisces about her history as the always-moving kid of Thunderbolt Ross, which then becomes central to the defeat of Mor-I-Dun, making it feel like his defeat was written into the very earliest threads of the Marvel Universe.

The biggest difficulty of a story like this is making the previous iterations of the cosmos feel like they’re as wild and as lively as the actual Marvel Universe (which, by the way, is both the Seventh and Eight realities, somehow), but The Defenders #3 overcomes that problem with all-out creativity on all fronts, with beautiful art combining with vivid (and IMPORTANT) coloring and a story that makes wild-and-inventive moments seem perfectly rational, and even inevitable, earning dead-solid 5 out of 5 stars overall.  If you want some truly impressive comics, I recommend that you read Defenders already.

Ewing and Rodriguez breaks the rules to make them work, featuring a focus on Betty Ross, The Harpy, and an truly puzzling mystical universe. If you've been sleeping on The Defenders, you're missing out.