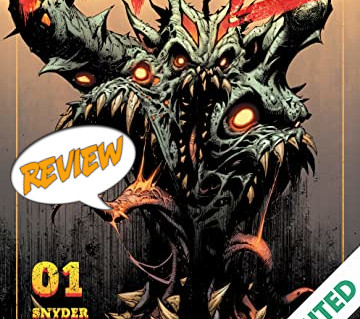 We Have Demons #1 Review

Lamassu knows that something is going on, but will she be happy to find out the truth of her father? Find out in We Have Demons #1, a comiXology Original!

Previously in We Have Demons: Come check out the new series from Scott Snyder and Greg Capullo! Lam, or Lamassu, is a preacher’s daughter but her father did other work that he kept secret from his daughter!

We Have Demons #1 starts with Lam looking at her neighbors and planning to kill them. We are then pushed back in time to how she got here. We learn that Lam’s father, Cashel Cullen, was a pastor. When Lam was five, she had to have her hand amputated due to a poisonous bite. She then had to adjust to life with a prosthetic limb. As she grew older, her father remarried, and Lam realized that her father took a lot of business trips for the church. When she confronted her father, he pushed her away.

Lam went to college and didn’t interact with her father at all. That is until he heard that he died. After the funeral, he learned that Cash was a demon hunter and that he had a partner named Gus. She picked up a legendary weapon and went after her neighbors who may be demons. After meeting with them, they turned into monstrosities. These demons revealed they killed her father and Lam was next to die. Luckily, Lam was saved, by the demon Gus!

I didn’t have that many expectations from We Have Demons #1. I was more interested to see what Scott Snyder was doing over at comiXology. This story worked out fairly well. We learn the origin story of Lam and are thrown right into the action. The opening sequences where Lam tells us she is planning to kill her neighbors gives us an excellent hook into the story. Especially since I didn’t read the solicitations and went in blind. I had no idea what the story was about, and I spent a lot of time trying to figure out if Lam was a serial killer or something more heroic. As we learn more about the setting and history, we learn that Lam is generally a good person. Finding out through this narrative arc allows Lam to be more relatable despite feeling like a generic character at times.

However, We Have Demons #1 was very wordy. I spent a long time getting through this comic and that is just because there are so many words on the page. We get long inner monologues that are there to facilitate information to us. While this is important, it slowed down the pacing of the comic tremendously. Maybe this balance will be better in later issue now that we know the premise of the plot and setting.

We Have Demons #1 is a solid start to a new series. It hooks the reader in and makes Lam relatable. However, it suffers from having a slower pacing due to the number of words on the page. Regardless, this is a 4 out of 5 from me and I will be picking up the next issue.

We Have Demons #1 gives us an interesting new story by Scott Snyder that hooks us right into the plot.