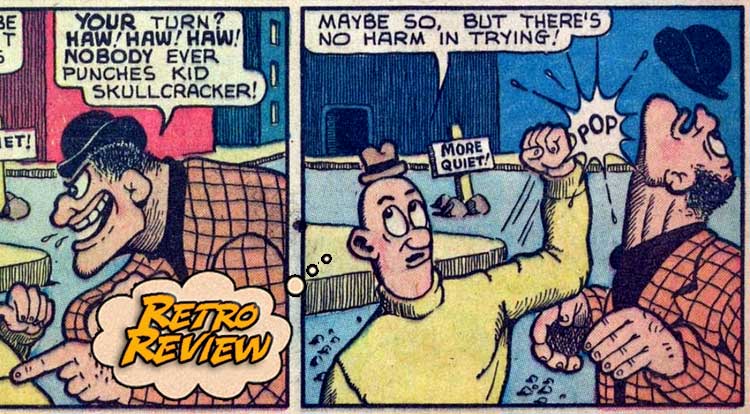 Many have heard of Basil Wolverton’s Lena the Hyena and his ugly people, but once upon a time, he gave us one of Marvel’s greatest warriors.  Are you ready for Powerhouse Pepper?  Your Major Spoilers (Retro) Review of Joker Comics #1 awaits! Previously in Joker Comics:  I’ve met and read the work of a lot of comic book historians in my day, but it’s always a little bit disheartening to see so little attention paid to the actually funnies that made the funny books what they are.  Every appearance of Batman, of Wonder Woman, even of The American Crusader has been pored over, but when it comes to the bigfoot cartoonists, doodlers and funny animal artists get short shrift.  It’s a shame, too, because artists like Dick “Frankenstein” Briefer and Al “Atomic Mouse” Fago were some of the most inventive of the day.  And speaking of inventive, we transition over to the work of Basil Wolverton. A professional artist since the age of 16, Wolverton was a part of the very earliest days of comics, working for Centaur and Lev Gleason comics as early as 1938, but much of his work during the era was for Timely/Atlas/Marvel.  This issue represents the debut of Powerhouse Pepper, one of Wolverton’s signature characters, first encountered crossing the street and nearly getting killed by a man who turns out to be a heavyweight boxer.  “Kid Skullcracker” takes a shot at Pepper, only to get a powerful chiclet-rattler in return.  The champ runs away, but things are about to change for our erstwhile Powerhouse. It’s wonderful that Wolverton can pull so much emotion from a man who literally looks like a thumb.  This issue’s wonderful visuals are brilliant in their economy, like that last-panel crowd scene, but the sheer amount of “acting” done by Basil’s characters is stunning.  Having been recruited by the fight promoter, Powerhouse Pepper prepares to face Kid Skullcracker in the ring, but things aren’t exactly on the up-and-up. I’m going to have to say that this referee isn’t quite the straight-shooter that he claims to be, but even a shot with a hammer isn’t enough to down Pepper, though it does crush his doiby.  He takes a hammer shot to the skull, only to respond with a mean right cross that nearly takes Skullcrusher’s head entirely off.  When the ref claims that his glove is loaded, Pepper shows that it’s not, rather viscerally. How does a champion get crowned the winner after hitting the canvas with his face?

That’s a question that Powerhouse would also like an answer to, and it’s… pretty obvious, actually. Our hero ends the story with the championship and a bag of cash, setting off on a career as a boxer using his obvious superhuman strength.  (Fun Fact: This story canonically takes place in the Marvel Earth-616 prime continuity, which makes it plausible that Pepper’s inexplicable superhuman might could be attributed to the mutant genome.)  All in all, Joker Comics #1 is the start of a ten-year run by Basil and Pepper, including his own five-issue solo series, but the simple elegance of Wolverton’s story and the brilliance of his art makes it a very memorable tale for me, earning 5 out of 5 stars overall.  This issue also features the second appearance of Stuporman, a silly parody of you-know-who, and a very puzzling adventurer called Alec The Great about whom I’m going to have to do some research.

Basil Wolverton is a cartooning impresario and Powerhouse Pepper is a wonderful character that only he could have brought to life. This story is several pages of comic book joy.